Yandex: From Russia with Love Russian search giant Yandex recently completed the biggest dot com IPO since Google, raising $1.3 billion as it debuted on NASDAQ on May 25th. The listing, allied with subsequent share dealings, gives the Russian search engine a market cap of more than $10 billion. Putting that into the context of the global search market, Yandex currently has a market cap approximately one sixteenth the size of global behemoth Google, Inc., and one quarter the size of Baidu, Inc., the leading search engine in China. 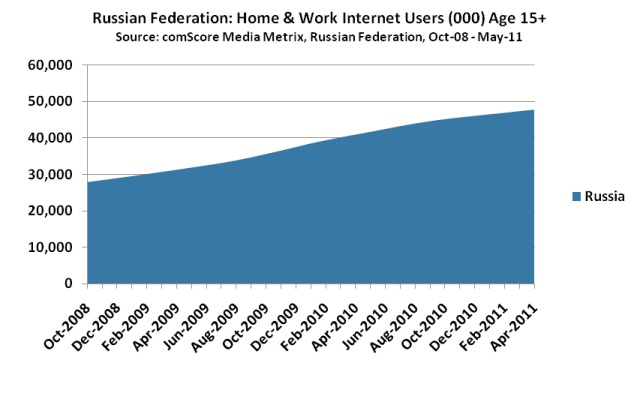 This amazing growth has propelled Russia to become the second largest European market, now trailing only Germany in terms of total audience size. However, with a total population of approximately 140 million, there is still significant room for growth in Internet adoption and potential to increase search activity among existing users.

Yandex is well-positioned within this large and rapidly expanding Internet market. It is currently the most visited web property overall in Russia, with more than 38 million Internet visitors in April, making it more popular than Google, Microsoft and Facebook combined (34.6 million unduplicated visitors visited at least one of these sites). But audience size alone does not drive revenue and profitability. That depends on Yandex’s ability to monetize its audience, which in this case comes primarily from search advertising revenue. In April, Comscore observed 2.5 billion searches conducted on Yandex in Russia, with an additional 300 million from elsewhere in the world.

Not only is Yandex leading the Russian market as the top online destination, it also commands the greatest share of the search market at 64% of all queries, up from 56% at the beginning of 2010. With nearly two-thirds of total search volume today, it wields significant market power. 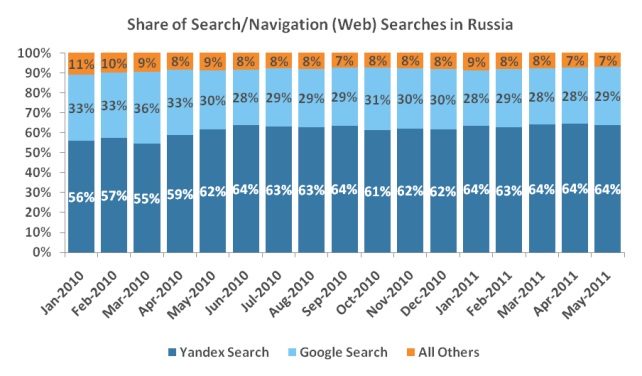 Whether Russia is written about in future generations as one of the global markets that Google failed to lead depends almost entirely on the continued success of Yandex. With such a large and growing following, Yandex’s market position appears secure for now. A bigger question, perhaps, is whether it can effectively branch out beyond Russia’s borders and increase its long term avenues for growth.