The idea of the United States as a “melting pot” isn’t new - it dates back to the 1780s. And if we look at the most recent U.S. Census data, it’s clear that the country’s multi-cultural mosaic is only getting more diverse.

As populations become more diverse, it’s become more important than ever that media measurement accurately and reliably represents the viewing behavior of all groups – especially for demographics such as race and ethnicity.

For too long, measurement has gotten away with letting a few speak on behalf of the many. The industry has allowed a handful of panelists to represent the behavior of entire populations of viewers. We also recognize that every viewer is behaviorally unique, making it a dangerous premise to assume that just because someone fits into an ethnic/racial segment it means that they are representative of that group’s viewing behavior in its entirety. As our society continues to become increasingly diverse, it’s crucial that our standard of measurement keeps pace and takes a granular view of diverse audiences based on their behaviors, interests and lifestyles.

Getting to this level of measurement for a diverse population requires an approach that is data-centric but informed by surveys or panels. Measurement should be founded on a scale to sufficiently and passively capture the habits of tens of millions of viewers – spanning demographics and geographies – ensuring a representative and stable view of smaller demographic groups’ true behaviors that active, sample-based measurement alone simply cannot provide. Samples, such as panels or surveys, should be used to complement or “inform” scale-based measurement to facilitate standard weighting and projection methods.

To demonstrate the utility of scale-based measurement in reporting diverse audiences, Comscore performed a detailed analysis to understand how set-top box measurement of different races and ethnicities compares to the universal TV household estimates.

What were our findings? The percentage of Comscore's reported Black/African American households, at a market level, is significantly correlated with TV household universe estimates (Pearson correlation* of 0.98). We plotted our set-top box measurement against the TV universe estimate for all 210 markets to better understand that relationship.

The black line in Figure 1, below, is the perfect representation of the TV universe for the Black/African American population. The orange line shows Comscore’s unweighted representation across all 210 local markets (each plotted point on the graph represents a market). The closer the two lines are the closer the match of Comscore’s Black/African American composition to the TV market composition. 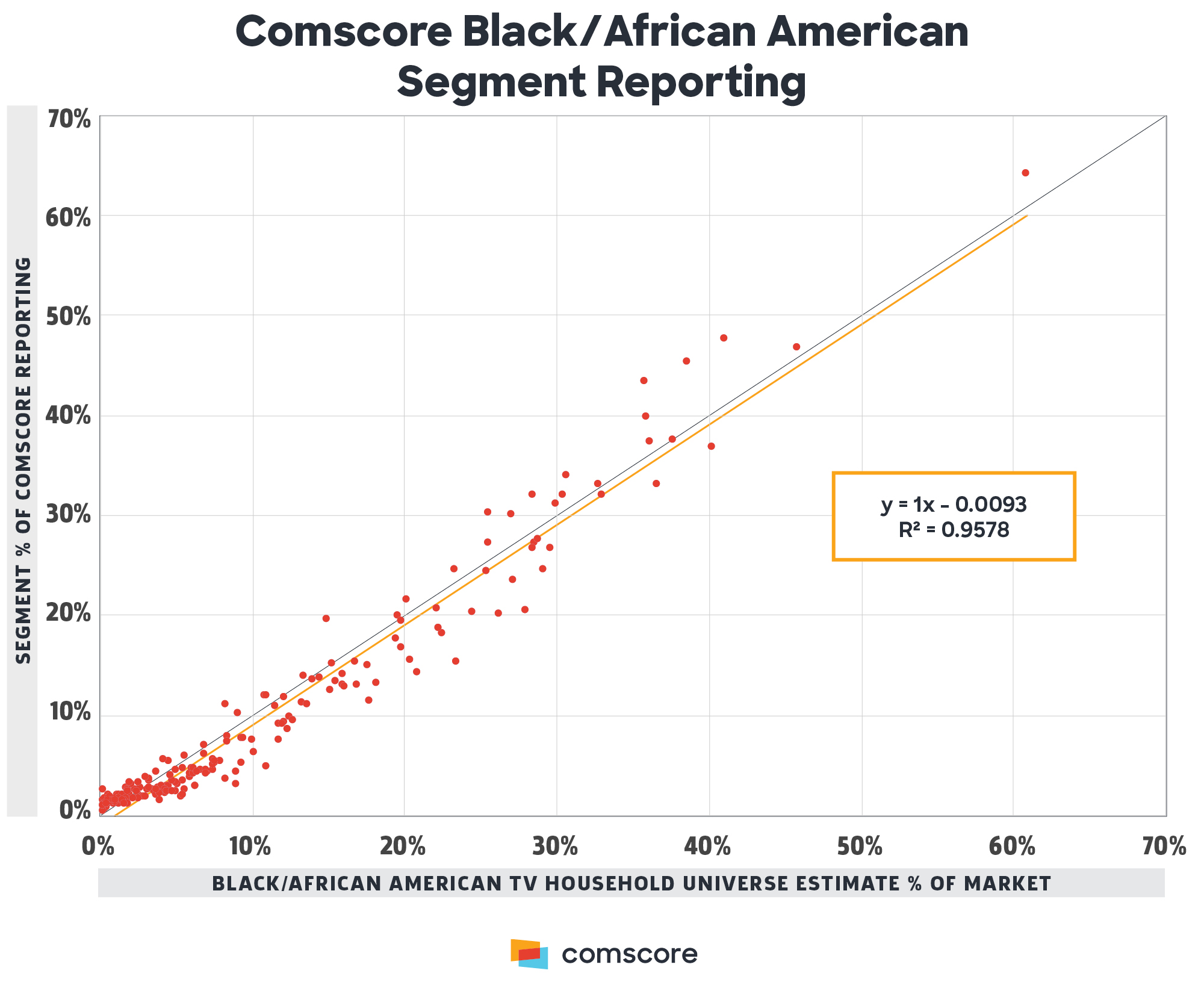 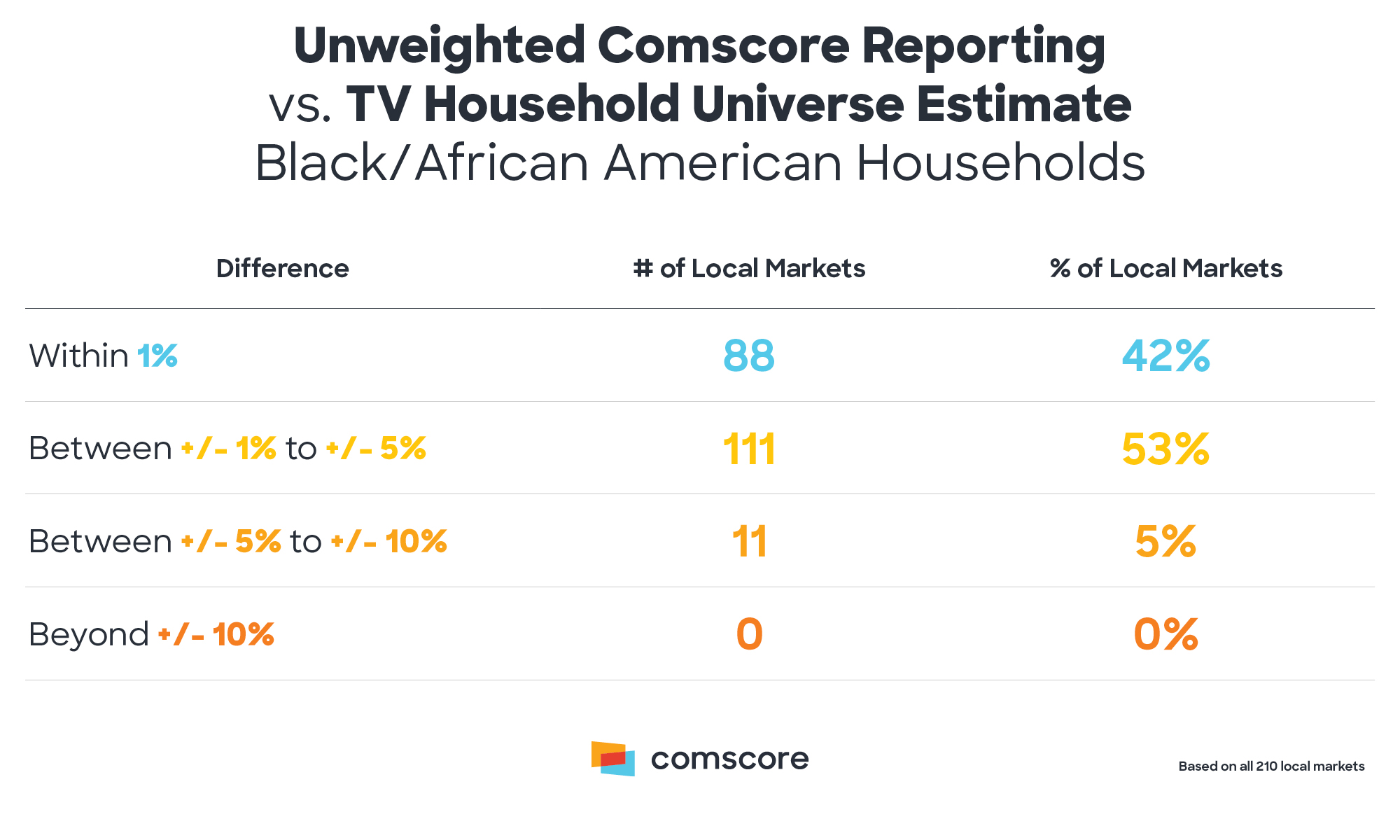 More discretely broken out: 196 local markets are within a 5 percent margin of the TV universe estimates. That’s 94 percent of markets within the United States. 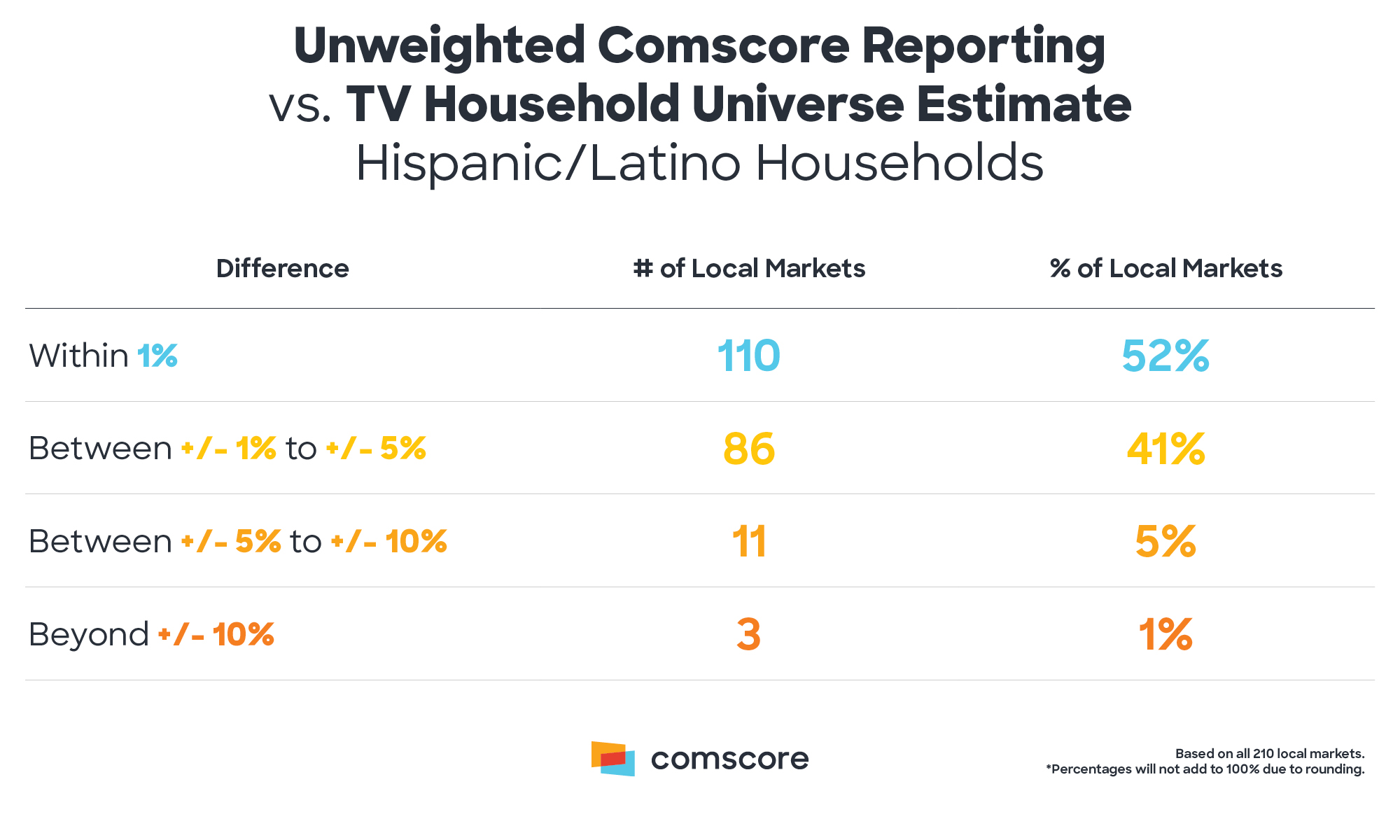 Ensuring that your data adequately accounts for all audiences is undeniably important to both media buyers and sellers.

This analysis demonstrates how closely the set-top-box measurement footprint is discretely aligned with the TV viewing population. But beyond looking at various races and ethnicities, we can also garner insights into non-English language networks and stations servicing niche minority communities (across Korean, Cantonese, Filipino, French, Gujarati, Hindi, Mandarin, Japanese and Spanish language broadcasters), as well as understand the number of households that watch television in more than one language. Take February 2019, for example, where over 3 million households of Comscore’s footprint watched at least one hour of linear television in two different languages.

Diversity isn’t just a hot button topic. It’s essential to creating an equitable, inclusive culture. In measurement, in programming, in advertising, we as an industry must ensure that we encompass different ethnicities and races, beliefs and lifestyles to ensure that our work is reflective of the multi-faceted, complex tapestry that makes up our audiences and the world in which we operate.

To learn more about Comscore’s linear TV measurement, contact us.

* A Pearson correlation is a number between -1 and 1 that indicates the extent to which two variables are linearly related.