Comscore has reported very healthy online spending numbers this holiday season, but it didn’t start out that way. Early in the season we saw slowing desktop e-commerce year-over-year growth, marked by a sharp dip in the 7-day trailing average trend. This waning growth coincided with the days immediately following the U.S. Presidential Election, signaling that consumers might have been experiencing a post-election “hangover,” in which the uncertainty about the future caused a temporary pause in spending for some consumers.

This effect was short-lived, as spending growth during the “Cyber Five” – the five key shopping days from Thanksgiving to Cyber Monday – far outpaced the season average and brought the season-to-date growth rate back into the expected 12-13% range. The 7-day trailing average peaked on Cyber Monday, but the period of high growth continued through Cyber Week. Even though it has since reverted somewhat, the 7-day trailing average has been able to maintain a consistent growth rate in the low double-digits since Cyber Week ended. 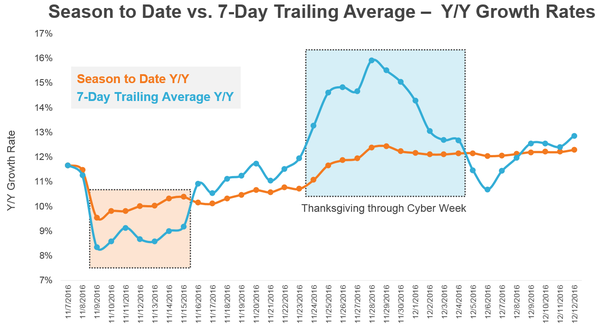 For more online retail insights from the 2016 holiday season, visit our Comscore blog or check out our most recent press releases.