Digital Commerce Outlook: What Does $133 Billion in Holiday Spending Mean for 2020?

As this holiday season got underway, Comscore saw Cyber Monday deliver almost $8 billion dollars in spending in one day alone. With that as a bellwether, we expected a big holiday season overall, and consumers did not disappoint.

Overall, Comscore tracked $133.7 billion in digital commerce this holiday season for the U.S., an increase of 16 percent from 2018. While the growth rates were a bit softer than last year, it is still clear that digital commerce is continuing to flourish as more and more consumers turn to the internet to make purchases, during holidays or otherwise. Mobile was a driving force as well; while desktop spending grew 13 percent year-over-year, mobile spending grew by 23 percent year-over-year. Additionally, mobile as a share of total digital spending was nearly 32 percent – the highest on record.

On a category by category basis, the usual top categories we see for digital commerce remained the highest in raw spend throughout the holiday season. Apparel, far and away the highest digital commerce category, hit $27.2 billion in 2019 (+17% vs 2018), while consumer electronics slotted in at second place for total spend.

From a year over year growth perspective, the top growing categories were event tickets, sports and fitness, and toys/hobbies (a fast-growing category which we believe has been fueled by the increased popularity of board games and similar items). 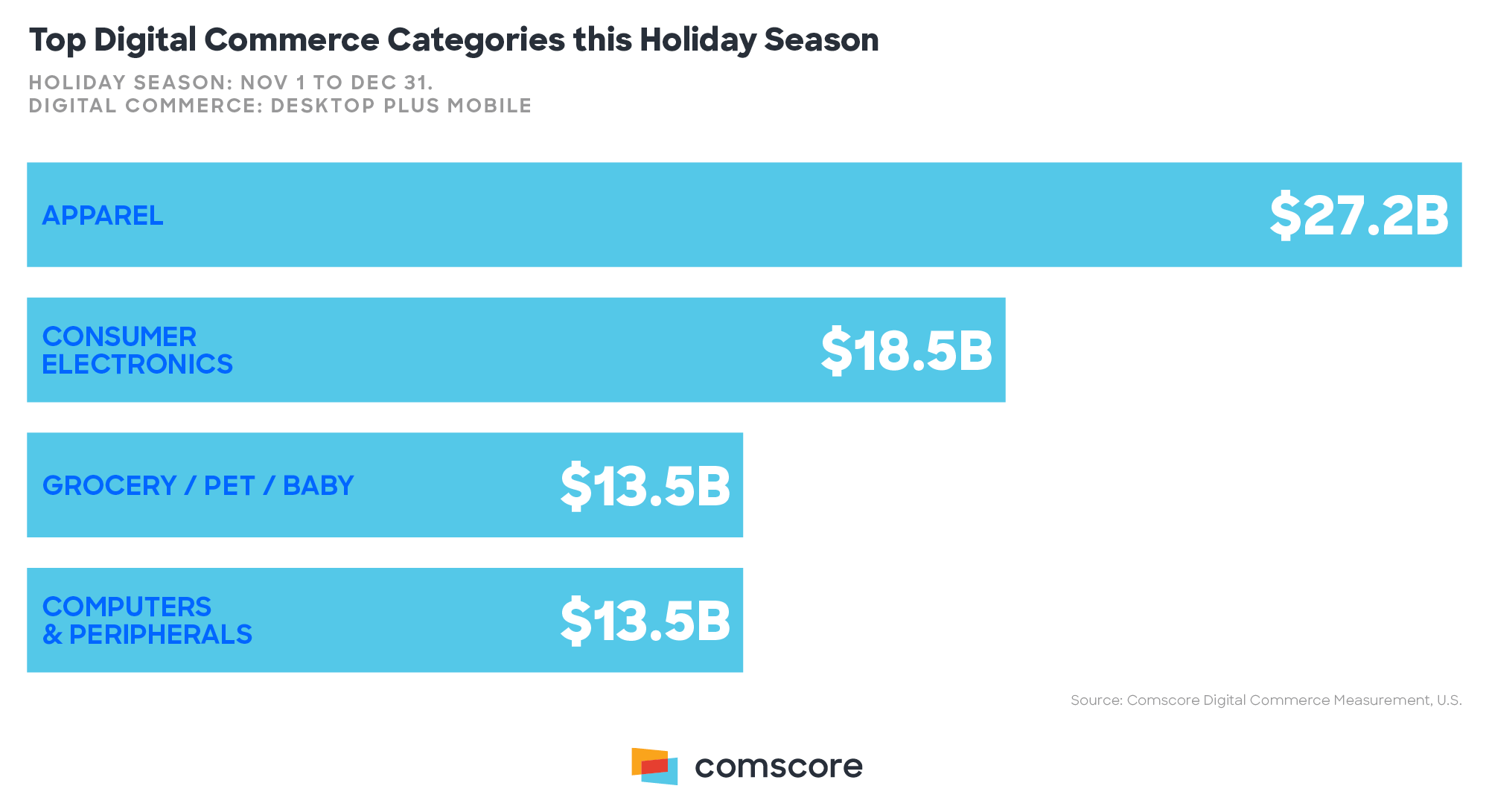 Consumers Are Focusing on ‘Cyber 5’ Sales

While Comscore considers the ‘holiday season’ to be everything from November 1st to December 31st, traditionally, we see a huge spike of online spending begin around Thanksgiving and Cyber Monday, or what has been dubbed the ‘Cyber 5’ holiday days. Despite brands aggressively pushing sales weeks ahead of the Cyber 5 holidays to get ahead of the shorter holiday season, the two weeks leading up to Thanksgiving 2019 were one of the slowest growth periods of the holiday season (4% desktop growth which was well below the 10% growth over the entire season for desktop). It seems that consumers have become a bit conditioned to see the ‘Cyber 5’ as the days for the best deals, and more tepid spending prior to those days suggests that they might be holding out for these perceived best deals, which are expected to come those days.

Between 2015 and 2019, the share of holiday spending around the Cyber 5 days increased from 16% to 20%. While four percentage points doesn’t necessarily seem like a seismic shift, each point represents billions of online dollars. However, just because a higher share of spending has moved earlier in the season doesn’t mean that the days leading up to Christmas are atrophying when it comes to spending. In the 2019 holiday season, 87% of the days leading up to Christmas (starting with November 1st) were billion-dollar spending days on desktop. What puts this number in context is that in 2015, that number was only 30%. In four short years, we have seen holiday spending rise to the point that nearly every day is over a billion dollars of desktop spending alone. Although Comscore doesn’t report mobile spending for individual days outside of Thanksgiving, Black Friday, and Cyber Monday it’s safe to assume based on overall holiday trends, that total digital spending pushed those days even higher.

Trend Spotlight: Did In-store Pickup Have an Impact This Season?

For at least the last two or three years, a perennial question during the holiday season has been, are consumers utilizing in-store pickup? It’s a trend that has floated near the top of holiday topics, but never one that really jumped out as a main event. This season, we did see some interesting data on consumers’ intent to use in-store pickup, as well as their reasons for using it, which could indicate a step change in the direction of adoption.

Overall, exactly half of consumers said they were at least somewhat likely to use in-store pickup this holiday season (a number from our Holiday Shopping Survey, which was conducted before Christmas). With more and more retailers adopting the option, and blanketing television with ads extolling the value of it, it is not surprising that we see this number jumping up a bit.

Among those who selected in-store pickup for a purchase, the reasons for doing so were interesting as well. Avoiding shipping fees was naturally a top choice; we've seen this trend over the years, as consumers consistently prefer free shipping in every context, to save money. Now we see consumers even willing to (perhaps) inconvenience themselves if it means no shipping fee.

Another interesting metric was the fourth-highest reason: 19% were concerned about package theft. As a growing trend, with 36% of online shoppers have reported having a package stolen at least once, videos of package pirates regularly make the rounds on social media (and have even become a value proposition in commercials for smart doorbell systems such as Ring). Unsurprisingly, this is a significantly higher concern for urban respondents, where those living in a city showed a 2x higher selection of this reason for in-store pickup than those living in a rural area.

What’s in Store for Digital Commerce in 2020?

Despite a hint of softness over the holiday season (compared to last year’s growth numbers), we believe digital commerce is still primed for another big year in 2020. Having eclipsed the 30% share threshold consistently throughout the year, mobile spending is set to pick up a larger and larger share of digital spending, especially among the high-growth categories we noted above (for example, toys and hobbies which grew +29% YoY).

Voice commerce has been a trendy pick in recent years but has yet to see adoption as a spending platform. In fact, few smart speaker owners say they regularly use it to make orders. While used often for general questions, our latest  report from Comscore Mobilens Plus showed that only one in ten used their smart devices to order food or services. It will be fascinating to see if this is the year it makes some headway with consumers.

Generationally, as we noted with the Cyber Monday spending data, Gen Z consumers could also be a driving force of digital commerce this year. As digital and mobile natives, this generational group could wield significant purchasing power in the online spending ecosystem, which will be another key story to watch as the year progresses.

To learn more about out how Comscore can you help you track and measure the latest digital commerce spending trends, contact us.