In the recently released 2016 U.S. Mobile App Report, we reported that Millennials concentrate more of their mobile app time within the Top 10 ranked apps in their cohort than older age groups do. In fact, half of Millennials’ total engagement on mobile apps occurs on the group’s Top 10 highest usage apps. This concentration of activity in the Top 10 decreases with age, highlighting the greater consensus among younger users on their favorite apps to spend time with. 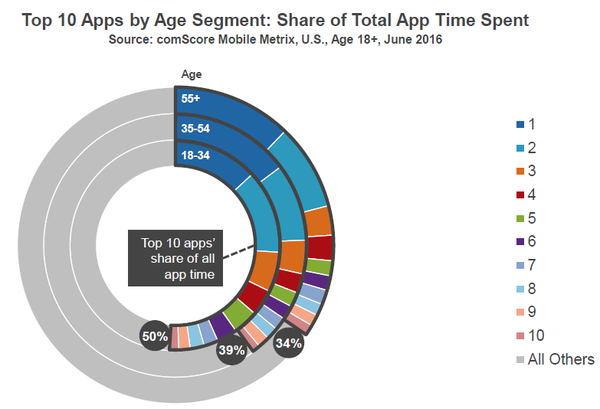 This was a somewhat surprising finding because we typically think of Millennials as having more apps on their devices and diversifying their usage over a wider variety of them. But is this actually the case? When we looked at the number of apps with at least 25% audience penetration among each demographic, it turns out that Millennials do have a greater number of widely used apps than older segments of the population. Comscore Mobile Metrix® data indicates there were 20 apps that at least one in four 18-34 year-olds used in a month vs. just 15 among 35-54 year-olds and 13 among those age 55+. 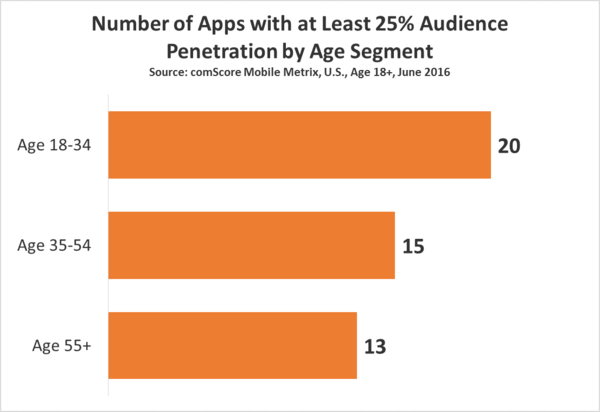 These findings indicate that Millennials – in addition to concentrating more time within their segment’s Top 10 apps – are, in fact, showing signs of diversifying their usage among more apps than older users. In other words, these two seemingly contradictory statements about Millennials are both true.

For more insights on the mobile app landscape and how mobile app behavior differs by demographic, download The 2016 U.S. Mobile App Report  here.