We’re all familiar with the philosophical question, “if a tree falls in a forest and no one is around to hear it, does it make a sound?” Striking parallels to this old adage can be drawn in our industry today, where many are asking a similar question relating to the effectiveness of ads in the digital environment. In light of concerns around ad viewability, brand safety and in-target delivery, many are now asking: “If an ad falls in the wrong place and no one has an opportunity to see it, does it make an impression?”

In other words, what is the value of an ad that doesn’t deliver an opportunity to be seen, or worse, is delivered next to brand unsafe content? How should we value an impression that reaches a consumer outside of the intended target?

With the advent of new tools and technologies – like  validated Campaign Essentials™ (vCE®) – we can now measure, quantify and improve the quality of digital ad delivery based on these dimensions. We can also use industry benchmarks to start understanding what should be expected when it comes to delivery of in-target, in-view and brand safe impressions. Looking at vCE benchmarks from hundreds of campaigns run in Canada throughout 2013, I hope to shed light on the current state of the industry and provide a useful guidepost for advertisers and their agencies trying to determine optimal delivery goals and expectations.

Viewability and the Opportunity to Be Seen

If an ad is not seen, then it can’t possibly do its job of eliciting a feeling, emotion or action related to a brand or product. An ad must do more than make an impression on a webpage in order to make an impression on the consumer. This is why quantifying in-view rates for ad impressions is such an important component of campaign verification.

An analysis of the vCE benchmarks for Canada revealed an average in-view rate of 44.4% for display ad impressions. This means that 55.6% of ads served did not meet the industry standard for a viewable impression, which is defined as 50% of the pixels on the screen for at least one second. This is the 3MS standard and the minimum that the industry has established to consider an ad viewable. 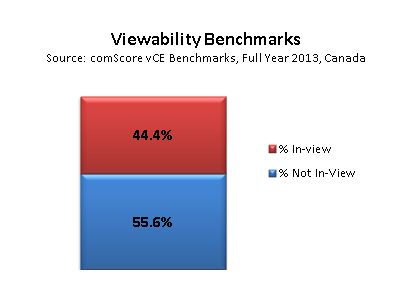 *Viewability benchmarks include display campaigns only; viewability is defined as 50% of the ad’s pixels in-view for at least one second.

At first look, many are surprised to learn that this normative rate is not closer to 100%, but at closer examination, there are actually several reasons why 100% in-view delivery is not realistic. For example, a user may leave the page before one second passes, or a user may not have his browser on a full-screen setting, disallowing the ad to load visibly on the page. This is why it is important to leverage industry benchmarks when setting expectations for a given campaign.

In addition to understanding whether or not an ad has an opportunity to be seen, advertisers want to understand how effective their campaigns are at reaching a given target audience. An analysis of in-target delivery found that 41.4% of display and video impressions were delivered in-target, meaning the campaign succeeded in hitting the primary target audience as defined by the client and agency. 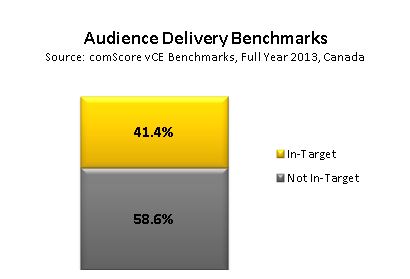 *Audience delivery benchmarks include display and video campaigns. In-target delivery is determined based on the campaign’s ability to hit the campaign target audience as defined by the advertiser and/or agency.

It is important to remember that many campaigns have secondary targets or targeting goals outside of demographic targeting. As such, an impression that doesn’t hit the primary target audience may still have an impact on an important secondary audience – and thus have an inherent value. This is why we encourage clients to consider the broader picture when evaluating and valuing the performance of their campaigns.

While topics of viewability and in-target performance often dominate discussions around campaign delivery, brand safety is another important component of quality delivery that cannot be overlooked. After all, having an ad appear next to questionable content not only detracts from the brand message but can also have a negative impact on brand perceptions. For example, if an ad for a fast food chain runs next to a health news story about a study linking fast food to heart disease, the impact of the ad is likely to be more harmful than positive.

With vCE, advertisers can set up custom blocking and alerting to manage the delivery of campaign impressions in accordance with their brand’s value, and they can also leverage a pre-defined Comscore list, which removes delivery to adult content and sites featuring hate speech.

For the purposes of the vCE benchmark analysis, we measured both content that appeared on the Comscore list as well as content identified by a given advertiser as unsafe. The analysis revealed that 24.7% of the time ads ran the risk of running next to inappropriate content, and if they had not been blocked or if alerts had not been set, the impressions would have run next to unsafe content. This is why many of our clients leverage brand safety alerting and blocking as part of their delivery strategy.

As more and more advertisers leverage tools like vCE to evaluate delivery performance, I consistently get questions from clients about how to use these data and insights to improve their efforts and get the most out of their marketing investments. Many of our larger, more progressive advertiser clients – like Kellogg’s – are increasingly using these real-time insights to optimize in-flight and inform future campaign planning. Over time, they are seeing average in-target and in-view rates improve, which has a direct impact on sales lift and ROI. Having access to better digital ad delivery data also provides them with more powerful inputs into their marketing mix models so that they can better evaluate digital relative to other channels. It’s been quite exciting to see the power of these insights in helping the market better evaluate and value digital advertising.

Brent Bernie, President of Comscore Canada, will be a panelist at the ACA’s executive forum:  Where is Your Online Ad Money Really Going? Transparency, Verification and Auditing. The forum is taking place on June 11 in Toronto.