*Versus corresponding shopping days from 2008, not same calendar dates

“The 2009 online holiday shopping season was a positive one as its growth rate slightly surpassed our forecast and returned to solidly positive rates after nearly a full year of marginally negative growth,” said Comscore chairman Gian Fulgoni. “Among the highlights of the season was the first $900 million online spending day and a strong late season spending surge, propelled by effective retailer promotions, guaranteed shipping and a major snowstorm on the eastern seaboard that convinced many to shop from the comfort of home. It’s possible that this better-than-expected end-of-year performance is a harbinger of renewed vigor and optimism for 2010 as the consumer economy seeks to rebound from one of the worst years in memory. At the same time, we need to remember that consumers’ spending power remains constrained by high unemployment levels, substantial debt and a new-found desire to save.”

Tuesday, Dec. 15 ranked as the heaviest online spending day of the year – and of all time – at $913 million, one of nine individual spending days to surpass $800 million during the 2009 holiday season. The heavy spending on this day represented a surprise total on the heels of a somewhat lower than expected $854 million spent on Green Monday (Dec. 14, 2009).

Meanwhile, Cyber Monday (Monday, Nov. 30), propelled by aggressive retailer promotions, ranked as the second heaviest spending day of the season, the highest it has ever ranked on this list, with $887 million in spending. The third heaviest spending day of the year was Tuesday, Dec. 1 with $886 million in spending, followed by Wednesday, Dec. 16 with $874 million and Green Monday (Monday, Dec. 14) rounding out the top five with $854 million.

*Green Monday occurs on the Monday with at least 10 days prior to Christmas and tends to be the heaviest online spending day of the season. 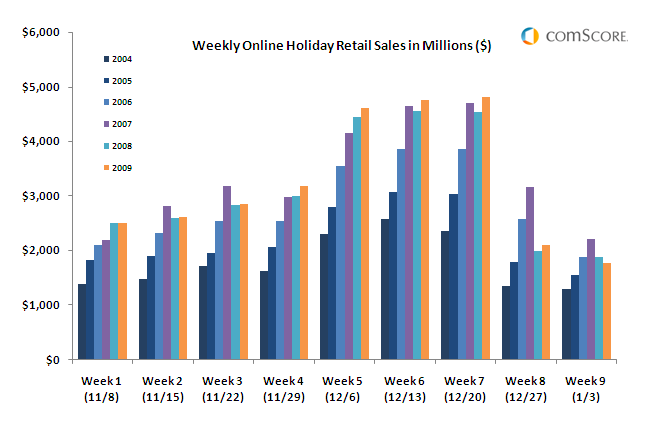