Good News for Digital Publishers: Most Have Low Levels of Non-Human Traffic

Digital ad fraud has understandably become a huge concern for advertisers as techniques to manufacture non-human traffic (NHT) become more prevalent. We recently wrote about the NHT incidence we’ve observed across a variety of digital campaigns, but it is also important to look at the issue from the publisher’s point of view. And while there’s no doubt that NHT will continue to be a significant concern for both the buy side and sell side, there is a silver lining for publishers. For the vast majority the overall incidence of NHT on their sites is low, which means they are affirmatively delivering trustworthy inventory for advertisers. 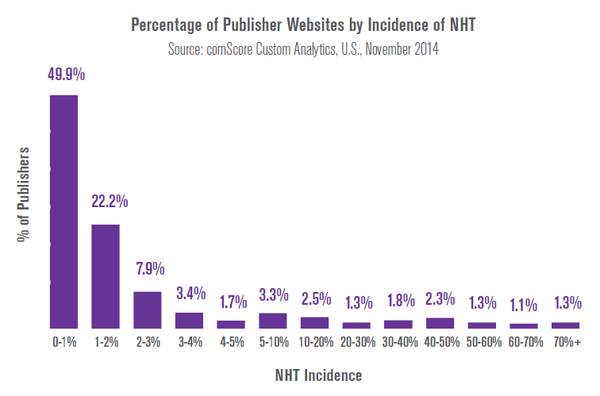 It is encouraging to see that the issue of NHT from the publisher perspective is largely confined to a relatively small percentage of content owners, while the vast majority are delivering inventory with minimal or almost non-existent levels of NHT.  Among the Comscore MMX Top 100 Properties, 91 percent have NHT levels below 5 percent.
Effective mitigation of NHT means promoting trust between buyers and sellers that will better align ad pricing with the value delivered. Want to learn more about the true value of digital advertising? Download our latest whitepaper – The Value of a Digital Ad - now.