Last week, Comscore released a report titled  The Effects of the Recession on Brand Loyalty and Buy Down Behavior: 2011 Update, highlighting the results from a 4-year study on consumer purchasing behavior during the most recent U.S. recession. The results of the study indicate that as adverse economic conditions have endured, more consumers are “buying down” in terms of which brands they purchase (in CPG and select product categories). In other words, fewer consumers are buying the brands they “want most”, and instead purchase various brands that are on sale, or even switch to cheaper brands on a regular, ongoing basis. As consumers regularly buy down and in some cases become accustomed to using alternative brands, this phenomenon poses a major threat to premium brand sales and market share.

Multiple large scale studies of past recessions indicate that brands that continued to invest in marketing efforts during recessionary times not only maintained market share during the recession, but actually increased share post-recession. Unfortunately, it is typical for company cutbacks to target advertising budgets, often seen as an expendable cost. This makes it critical for advertisers to get the most for their advertising dollar. Using over 40 years of ad testing experience and research, Comscore has identified several strategies that have been successfully used by brands to make the most of limited advertising budgets.

Evaluate Your Ad Strategy and Employ Early-Stage Screening Before Developing Creative
Comscore research has shown that there is no positive relationship between the production cost of a television ad and its sales effectiveness. This finding points to the reality that even the most expensive creative efforts are unlikely to salvage an advertising strategy that is off the mark. Comscore research shows that strategy evaluation and early-stage screening will almost guarantee that advertising will sell and that precious advertising dollars are not wasted. In a threatening economic environment, these steps have never been more critical. The table below shows that an above average creative strategy leads to an above average execution 70 percent of the time, and has yet to be observed to lead to a below average execution.

Aggressively Utilize 15-Second Television Ads
Comscore has done extensive research on 15-second television ads, particularly those paired with a 30-second pool partner. In an analysis of over 300 such pairs, we have found that on average, 15-second spots are approximately three-quarters as strong as their 30-second counterparts. In fact, over 25 percent of the time the 15-second spot is as strong as or stronger than the 30-second spot. With a cost to air of just over half the price of 30-second ads, these shorter spots can often provide greater value per media dollar spent.

In multiple execution plans, abbreviated versions of 30-second ads can also be used to reduce production costs while simultaneously boosting GRPs. However, it is critical that the elements driving the success of the longer ad are understood and retained when creating the 15-second version. In single execution plans, original 15-second ads can be used in place of 30-seconds ads to take advantage of the lower media costs. One note of caution is that 15-second ads may not be appropriate for every situation. They are best when communication can be reduced to a single compelling idea with clear-cut benefits not requiring lengthy explanation or supporting information.

Understand the Persuasive Life of an Ad and Manage the “Wear-Out” of Your Advertising
Comscore research has also demonstrated that as money is spent behind an ad, its selling power decreases as a function of GRPs, leading to diminishing sales returns. The chart below illustrates this relationship.

If you know the strength of the ads in your campaign, you can manage refreshment of creative to maximize delivery of selling power. If ads are aired for too long, they lose most of their selling power, and incremental media spend will bring minimal returns. Hence, timely refreshment is critical to optimizing media investment. Ad poolouts are a very cost-effective way to replace ads without producing totally new ads. For example, a published Citrucel case study showed that re-cutting footage from the shoot of a worn down execution not only refreshed the selling strength, it actually resulted in an execution stronger than the original ad.

In contrast, ads are frequently replaced prematurely when there is plenty of power remaining. If you know the starting strength of your ads, you can avoid leaving money on the table by replacing ads too soon. Simulation technology can be used with the known strength of available ads and wear-out learning to optimize the planned media spend and project the likelihood of achieving business objectives.

Take Advantage of Emerging Touch-Points and Synergies
The synergies from use of multiple media (e.g., TV, digital, print, in-store) can often yield the same advertising impact at a reduced expense. As an example, online advertising provides a viable means to effectively reach elusive TV audiences at an attractive cost, as illustrated by the 90/10 budget allocation below. Total GRPs and reach are seen to increase for the same cost relative to a TV only media spend.

It’s also important to know how the different elements of your campaign are working together. Any potential synergies, or negative interactions, can be assessed using a creative pre-testing platform that is designed to test the effectiveness of executions from multiple touchpoints both individually and synergistically. With this knowledge in hand, media spend can be placed behind those combinations yielding the greatest total sales impact.

Flighting versus Continuous Airing? Don’t Go Dark!
It is a common misconception that running bursts of advertising in periodic waves is an effective way to drive sales. This means that a period of “darkness” follows where no ads or brand messages are being delivered. According to our research, this is not the most effective approach; rather, continuous airing of ads (at lower levels) maintains awareness and keeps brand messages in the market. In our global television validation study, ads with similar levels of persuasive power realized greater share gains over the course of a quarter when utilizing continuous airing versus flighting. If media spending must be reduced, avoid flighting. Continuous spending, even at lower levels, is more effective. 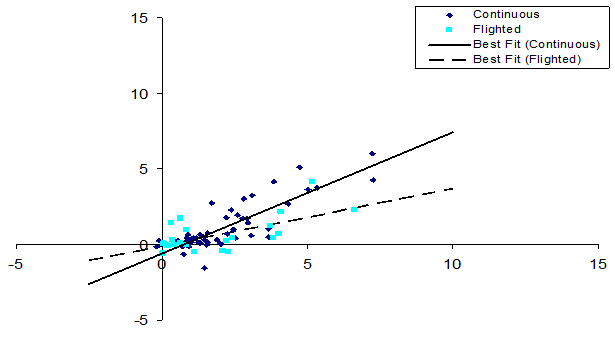 When advertising budgets are under strain, it is important to understand and adhere to principles based on sound research in order to optimize returns on advertising investment. In addition, to improve the odds of success in the current economic environment, marketers must understand how to work under constrained budgets at maximum efficiency. Doing this will involve some initial expenditures, but if chosen wisely, the returns are well worth it.