Comscore recently released The 2015 U.S. Mobile App Report, which covers the important role that mobile apps play in today’s digital landscape. A number of insights in the report focus on the habits of one of the most highly sought-after groups by advertisers – Millennials.

This generation of consumers, defined in the report as 18-34 year-olds, is known to exhibit far different digital behaviors than the general population, and oftentimes radically so. Considering that this group spends 86 hours per month on mobile apps – 23 more hours than their older counterparts – it’s worth exploring which apps Millennials are using that the rest of the population isn’t. From our analysis using Comscore Mobile Metrix data, it turns out that many of them tend to be social, chat or music-focused. 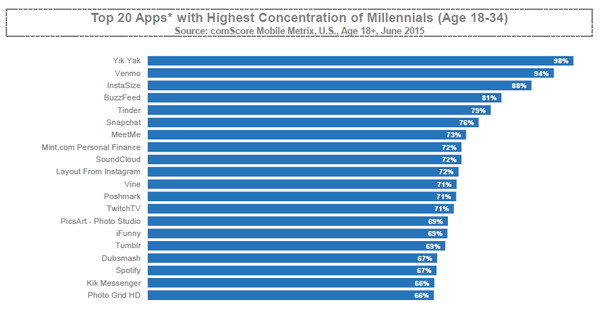 Yik Yak, an instant messaging app, tops the list of apps with the highest concentration of Millennials, with nearly its entire adult audience (98%) between 18-34 years of age. Its competitor Kik Messenger also ranks as one of the Top 20 ‘most-Millennial’ apps with two-thirds of its audience belonging to that influential demographic. Other notable apps on the list include the mobile payments service Venmo, social news publisher BuzzFeed, location-based dating app Tinder, and ephemeral messaging service Snapchat.

What nearly all of the apps in the ranking above have in common is a social element to them. Even apps that serve non-social functions, such Venmo with payments or Spotify and SoundCloud with music, have integrated social add-ons which are crucial to the value proposition of those apps. Expanding further on the social theme, the list also includes several social personalization apps, such as InstaSize and Layout from Instagram, which indicate Millennials’ affinity for creative expression and enhanced communications.

Perhaps the most important takeaway from this analysis might be that Millennials tend to live more digitally-connected lives than older generations do. They are more inclined to recognize the benefits of an online network in their daily activities, be they functional, interpersonal or community-driven. Overall, Millennials appear to be more comfortable and willing to share their interests and activities online, while also finding the value in those of others.

For more insights on Millennials and their unique mobile habits, we encourage you to check out The 2015 Mobile App Report today.