Given the pandemic and its impact on in-person retail sales, we expected a big start to the online holiday shopping season. Based on the Comscore spending data for Thanksgiving, Black Friday, and Cyber Monday, that expectation held true, as consumers increasingly turned toward online shopping. Total spending across these combined three days grew 25 percent compared to 2019, with both desktop and mobile spending showing double digit growth rates on each day.

Cyber Monday remained the clear winner in total dollars spent by day, though its growth year over year slowed somewhat compared to last year. In total, consumers spent nearly $10 billion online on Cyber Monday, a growth of 24 percent versus 2019. Last year, Cyber Monday grew at 31 percent compared to 2018, so we saw a slight softening of that growth as some spending may have shifted earlier in the season. 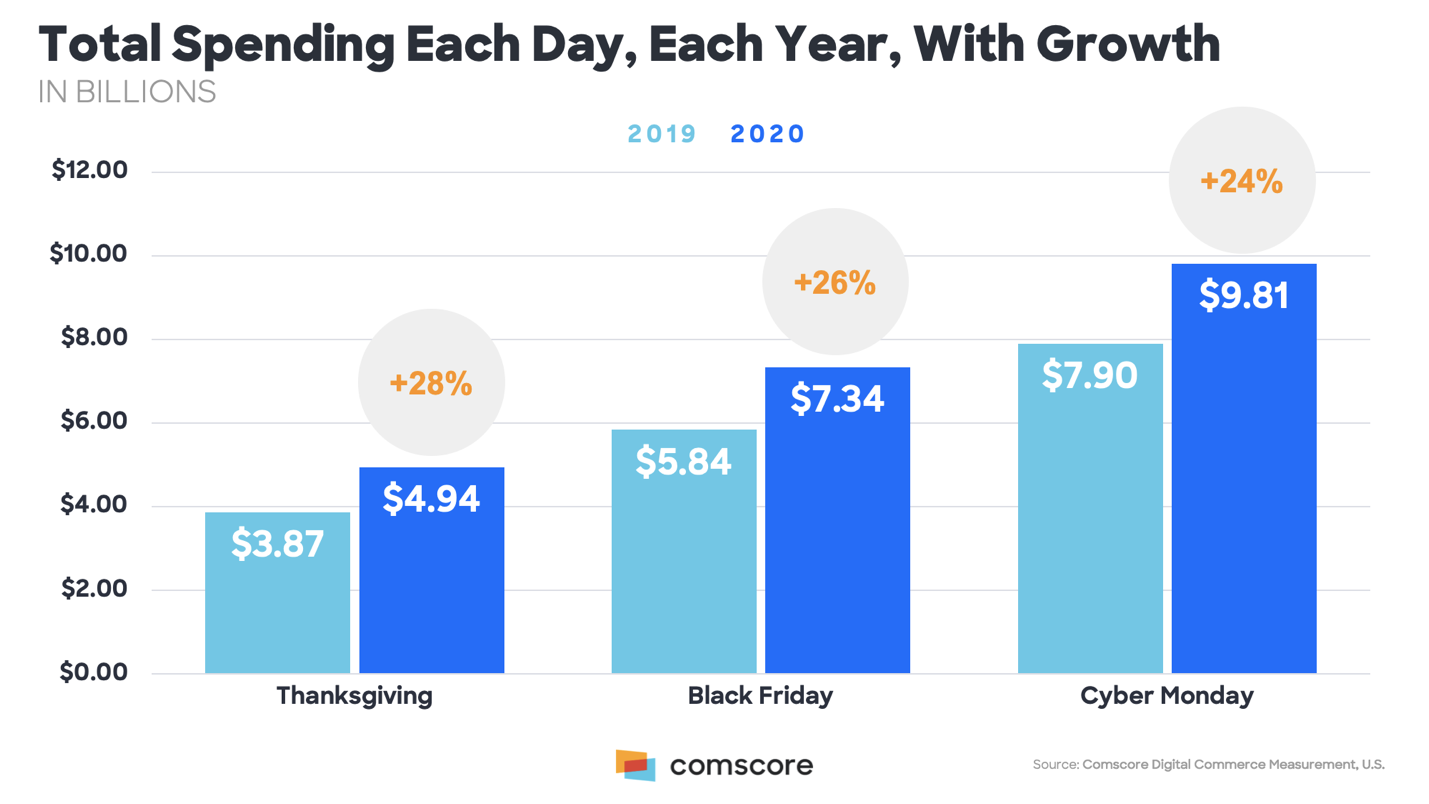 This year, both Black Friday and Thanksgiving grew at faster rates, particularly on mobile. In 2019, Cyber Monday saw a massive surge of mobile spending, while this year saw a much more modest 17 percent growth. As we discussed in our State of Retail webinar earlier this year, we suspected that an earlier start to the holiday shopping season may have an impact on these key holiday days. Particularly with Amazon Prime Day being in October this year as opposed to the normal July, it may have acted as a kickstart for holiday spending, two weeks earlier than our usual November 1st kickoff. Retailers began promotions even earlier this year, including the entire week of Thanksgiving and ‘Cyber Week’ deals, and that may have pulled a number of sales forward.

It is an interesting trend to see, as last year Cyber Monday was far and away the fastest growing day. This certainly signals that retailers have the power to pull forward deals and grow spending on those earlier days, but it also speaks to the strength of Cyber Monday. Even in a holiday season where promotions began early, Cyber Monday still maintained a significant advantage in total dollars spent.

Thanksgiving and Black Friday Have Strong Showing for Mobile
Mobile spending has been a significant part of these key holiday days for the last several years. While in a usual month of digital commerce spending, about 1 in 3 digital dollars are spent on mobile, we usually see that behavior amplified on these key days. In 2019, 37 percent of Black Friday and 40 percent of Thanksgiving digital spending was mobile. This year, that share jumped to 42 percent and 45 percent, respectively. With more and more retailers pushing out deals throughout the entire week, it seems many consumers jumped on those promotions via their mobile device and drove a significant amount of sales. 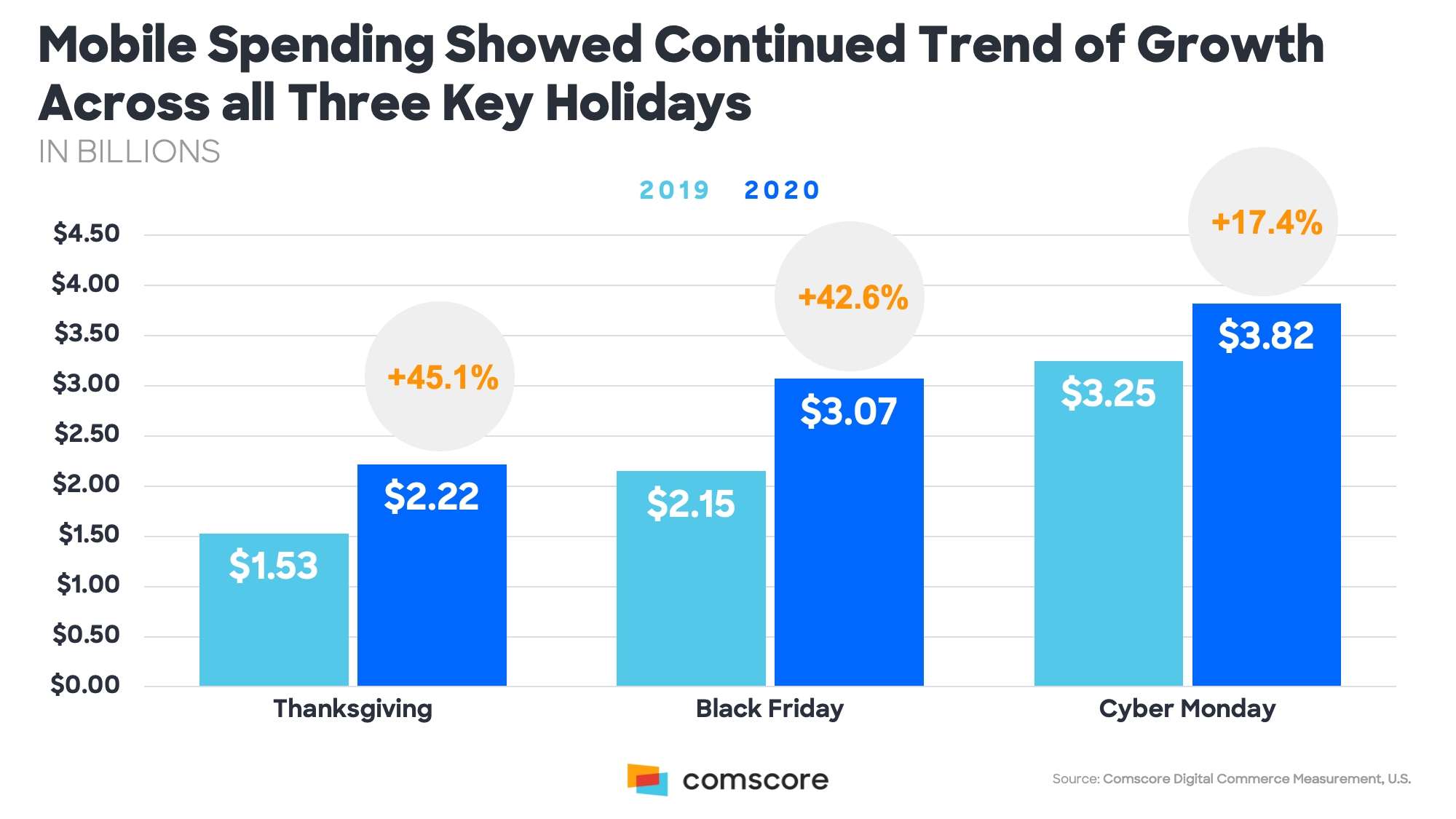 In the past, Cyber Monday typically serves in the top spot for spending across mobile by consumers, but this year, with deals pushed out sooner, we saw a shift in behaviors. Overall, mobile continues to show growth rates higher than desktop, and move toward a more equal footing with desktop as a spending platform.

Conclusion
With over $22 billion dollars spent online across these three key days, it is clear that consumers turned toward online shopping to start the holiday season in numbers we have not seen before. Thanksgiving and Black Friday grew at a slightly faster rate than Cyber Monday, and an early start to the holiday season may have shifted some sales a bit earlier than usual. However, with nearly $10 billion spent online just on Cyber Monday, its place as the top spending day among the Big 3 remains secure.