With news this week that Facebook is beginning to roll out its new Timeline feature, it reminds us that so much of what’s captured on the world’s most popular social networking site are our fondest memories. And if you look at your newsfeed in any given day it will often reflect the present – what’s happening in the world around you today. But there is not typically a lot of discussion about more aspirational topics, and what people are hoping for in the future.

A new social networking phenomenon appears to be taking off that just might fill this need. Online pinboard sites, led by Pinterest, represent your wants, desires and the future memories you wish to create. If this trend has not yet appeared on your radar, online pinboards are basically shareable scrapbooks that you create using online content you find around the web. If you see an image that you want to “pin” to your “board” you can simply snag it via a plugin and add it to your online profile. Everyone that follows you can view your pinboards, comment on them, and add to them if they have permission.

I heard about this emerging trend from a colleague, who used Pinterest as a central component of her wedding planning. She is able to create specialized pinboards for everything from the wedding dress to the invitations to potential honeymoon destinations. Her collective team of de facto wedding planners can all work in unison to vote up and down on every detail in order to deliver the perfect wedding experience. Although it would seem like Facebook and Twitter have most of the ground covered from a social networking perspective, there is always room for an innovator to tap into the existing cultural zeitgeist. According to recent Comscore data, it’s clear there is considerable and growing appetite for this kind of social engagement.

Pinterest: The New Player in Town
Pinterest has emerged as the main player in the online pinboard space, skyrocketing to nearly 5 Million U.S. unique visitors in November 2011 after first appearing on our reporting radar just six months earlier. 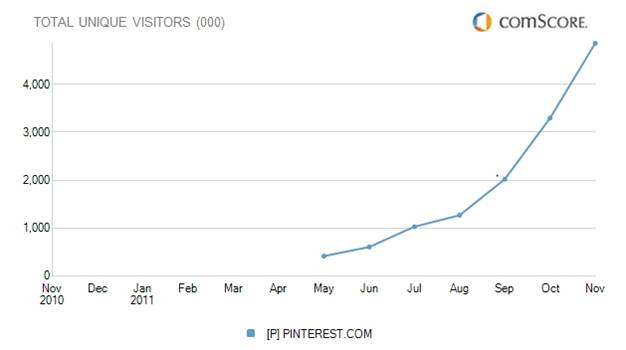 From what I can gather, the growth for this site has been completely organic, coming from the sharing of pinboards and personal invitations going out from existing members. Pinterest did not respond to my invitation request in time for this column and I had to have my colleague Kate invite me before I could get into the site and explore what it was all about. 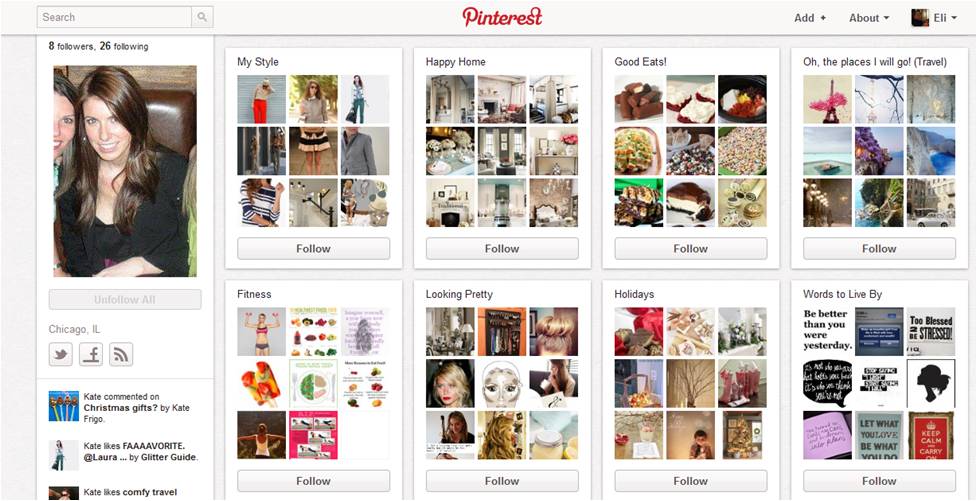 “Pinterest” as a brand name also appears to be entering the general lexicon in a similar fashion to words like “Twitter” in 2008-09, as evidenced by the number of searches on this new branded term. Considering that the word did not exist in 2010 but in October 2011 nearly 900,000 has searched for the term “Pinterest” more than 2.4 million times, it’s clear that awareness of this brand is accelerating. Search data like this can often be a leading indicator to investors regarding the viral growth of a company, especially in the absence of more concrete data such as sales. 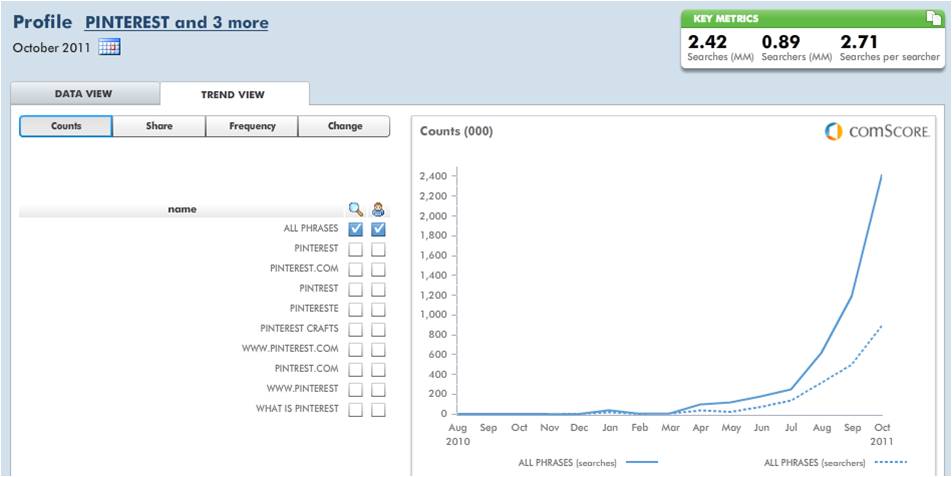 Who is Pinterested?
Living in New York City, it is easy to think that every new trend starts here on the Coast (geographic arrogance to the max!), but online pinboarding appears to have tapped into a region that normally comes up later in the internet adoption cycle: The Midwest.

When analyzing Pinterest’s visitor base, we see that visitors from the Midwest regions are up to 102% more likely to visit Pinterest.com than the average U.S. Internet user. This is in stark contrast to East/West coast regional visitors, who are 63% less likely to visit the site. This difference is even more pronounced when analyzing “Pinterest” searchers, with Midwesterners up to 185% more likely to search for the term as opposed to the Coasters, lead by New England, which is 83% less likely than average. 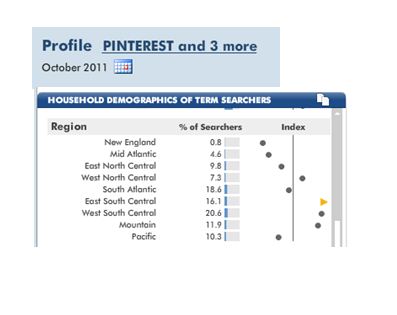 My anecdotal research (i.e. me speaking with my female colleagues in Chicago who introduced me to the site) suggests that Online Pinboarding mirrors scrapbooking as an activity, which is apparently huge in that area of the country. This is further backed up by my discussions with my East/West coast colleagues who all seem to agree; they are just not scrap-bookers at heart. The real growth to this point has come from the scrapbook-heavy Midwest, and it is only recently that the too-cool-for-school Coasters have begun to catch on. With the coasts still waiting to be conquered, now might be a good time for Pinterest to begin thinking about some regionally targeted paid search advertising before one of their competitors swoops in and capitalizes.

Pintresting Trends
Pinterest is on its way up, and online pinboarding looks like it just may represent the next wave of Social Networking. The intuitive functionality related to pinning images from around the internet to your board, combined with an existing Midwestern proclivity for scrapbooking, have allowed for huge growth in a very short period of time. Just remember that you can’t look at your site metrics in a vacuum. Visitor trends relate to search trends and can all be used in conjunction to better understand both your existing and future users.