In many markets throughout the world, the spotlight has increased on campaign validation as the industry, and particularly advertisers, are placing growing importance on knowing that their ads are delivered in-view, free from fraud, in a brand-safe environment and to the right audience.

To help guide the industry to better understand campaign delivery on the whole, Comscore releases industry benchmarks from the billions of impressions it measures across the globe through its  validated Campaign Essentials (vCE) solution.

Industry benchmarks are used to help set delivery expectations and provide a powerful indicator of relative campaign performance, but it’s important to remember that there is no normal when it comes to in-target and in-view rates as normal can vary based on a number of factors such as campaign objective, size of audience, placement and verticals.

Reaching the right campaign audience and having an impact on this audience is what really matters in advertising. When analyzing if digital campaigns reached the right audience, most markets across the globe saw less than half of ads reach their primary campaign audience. According to Comscore vCE Q1 2017 benchmarks, in-target rates ranged from 39% in France to 52% in Brazil. 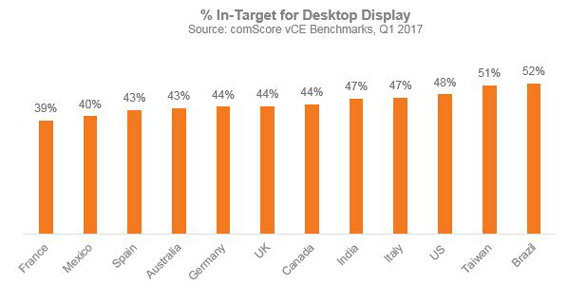 It’s important to remember that the cause of variation with campaign delivery is often the composition of the audience itself. The more variables used, such as age, gender and other demographics, the harder it is to reach the intended viewership. It is also important to note that impressions that land outside of the intended audience may still deliver value to the campaign by reaching and influencing other consumers. Thus, not all impressions that fall outside of the initial campaign audience should be viewed as wasted impressions.

Although viewability is often a focus of much industry discussion, viewability alone is not enough for advertising to have an impact as it is just one component of campaign delivery. Analysis of the Q1 2017 benchmarks revealed that, in many markets, around half of ads did not have an opportunity to be seen, with in-view rates ranging from 48% in Australia to 55% in the US and Canada. Active optimization of viewability is essential, given the varying rates by market, campaign, publisher and placement type. 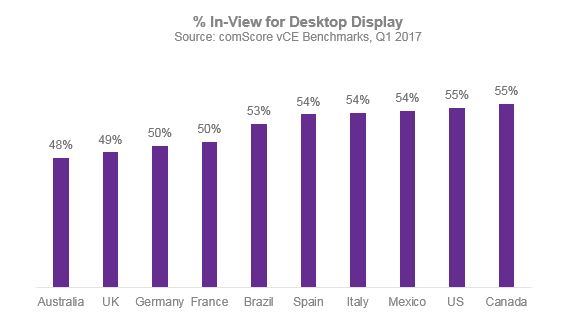 In programmatic, campaign delivery issues are often magnified due to the lack of transparency in the ecosystem. This is why validating impression delivery has become a critical component of campaign management in programmatic.

In a recent joint report, Comscore and Kantar Millward Brown took a deeper look at the impact of programmatic on brand metrics and campaign delivery globally, particularly viewability and invalid traffic, including how advertisers and their agencies can improve return on programmatic campaigns.

A snapshot of global campaigns monitored by Comscore in Q1 2017, found that impressions run through programmatic exchanges had lower viewability rates compared to those purchased through direct buys.

The same trend emerged with IVT rates: programmatic buys are more susceptible to invalid traffic than are direct buys. The issue of IVT is further exacerbated when looking at video inventory, where the higher CPMs of video provide a ripe opportunity for fraudsters to reap even greater gains. IVT rates on programmatic video are more than triple those seen through direct buys.

Further, the fraudsters are getting smarter. Comscore, which is accredited by the Media Ratings Council for its Sophisticated Invalid Traffic (SIVT) detection capabilities, found that SIVT accounted for 86% of all IVT detected and filtered by Comscore in Q4 2016. SIVT is far more difficult to detect than general IVT and includes issues like adware, malware, hijacked devices, and stacked ads, amongst others.

What You Can Do

As we have seen, robust campaign audience delivery, viewability and invalid traffic still represent big challenges for the industry across the globe. Working with accredited, trusted partners to validate campaign delivery is a key step in understanding ad delivery and optimizing to meet the goals of your campaign. Working together the industry can bring greater transparency and confidence to digital ad trading, which benefits all players in the ecosystem.