Following years of speculation and anticipation, European social music application Spotify recently touched ground here in the U.S. to a great deal of fanfare. Despite some difficulty in tangling with the record labels on royalties and fees, Spotify was finally able to come to terms and launch in the U.S. In its first three months since entering the market, Spotify has already amassed more than 2.4 million monthly U.S. visitors – a very strong start for a service that was initially invitation-only. While such exclusivity may have curbed some early adoption, it can also potentially drive benefits in terms of long-term engagement as consumers must put forth a concerted effort to be included in the network. 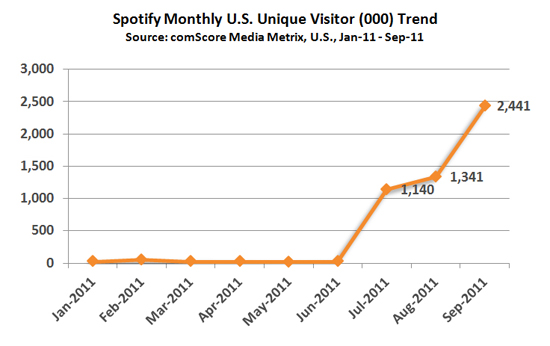 Following its first couple of months of live service in the U.S., I thought it would be worth understanding a bit more about Spotify’s early user base and what its entry into the market could mean for similar or competing music services. From a demographic standpoint, Spotify is currently drawing an audience that resembles the traditional early adopter. Nearly 3 in 5 visitors are male, 50% are between the ages of 18-34, and 24% are from households making at least $100,000 annually. Each of these demographic segments index significantly higher than average. That Spotify is attracting early adopters could be significant in the long run, as these opinion-leaders have a way of influencing the behaviors of those around them. 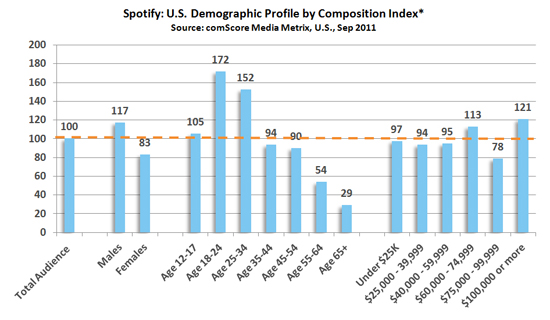 Despite Spotify’s rapid emergence, it still trails the computer-based (i.e. excluding mobile) online audiences of other music services like iTunes and Pandora by a sizeable margin. If it is to catch up with these other services, it will likely be due in large part to the company’s social strategy, which leverages Facebook for social music sharing. Spotify was prominently featured during Facebook’s f8 developer’s conference to highlight its social utility, which may have raised its profile and helped to introduce the brand to a broader base of U.S. consumers. 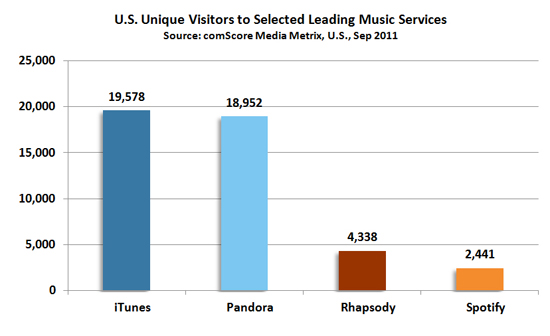 One point of contention with regards to Spotify’s Facebook integration strategy is the new requirement for newly registered users to log-in via their Facebook account. Comscore data suggest, however, that this requirement does not appear likely to shut out many potential users. In fact, 96% of all Spotify visitors in September also visited Facebook, significantly higher than the 75% of the total U.S. internet population that visited Facebook.

While it is still very early in the life of Spotify here in the U.S., the service seems to be off to a fairly auspicious start. Its social strategy will be an important determinant of adoption and it will be interesting to see how quickly it manages to grab hold in a competitive marketplace.