With the rising popularity of social media and online video, along with the growing adoption of smartphones and other connected devices, the Internet continues to consume an increasing amount of time in the daily lives of millions of consumers. For brands around the globe, the Internet has also emerged as a significant advertising channel. Consider that the Internet Advertising Bureau (IAB) reported that UK online advertising spending in 2011 was 14% higher than in 2010. In the U.S., eMarketer says online spending will grow by a staggering 23% in 2012, far outstripping the total media ad spending forecast of 6.7% in 2012.

To a large extent, brands are investing in digital advertising based on the results of research showing that online ad campaigns can increase both online and retail sales in a very cost-effective manner. Let’s take, for example, the results of almost 100 Comscore studies that measured the impact of FMCG online ad campaigns on retail (i.e. in-store) sales. These show that five out of every six FMCG online campaign generated a positive offline sales lift, with a median in-store sales lift of 21% among households exposed to the digital advertising campaigns compared to households not exposed to the campaigns. Further Comscore analysis has shown that one of the main reasons digital advertising works so well for FMCG brands is that more than 40% of the campaign ads include price and promotion incentives (e.g. communication of special prices, discount coupons, price packs, etc.), which have been proven to lift sales quickly when included in other media.

As the industry continues to study digital advertising and we learn more about how online advertising works, there’s been an increasing focus on what I believe to be an essential and foundational part of effective digital media, and one that can generate even stronger sales results. That is, the measurement and validation of the accurate delivery of digital campaigns. I find this aspect of digital advertising to be critical because, if executed correctly, it can allow for even more precise and efficient targeting of ads than is possible with traditional media. Let’s take a closer look at why this is true.

During the early days of digital advertising, it was assumed that display campaigns were generally delivered on target. After all, this was part of the great promise of the Internet as an advertising channel. As branding dollars began to move online, however, advertisers sought third-party validation of their campaign delivery. They wanted answers to critical campaign delivery questions, such as: Are my ads reaching the intended demographic and geographic segments? Are my R/F levels in line with my buying guidelines?

Many advertisers were surprised to learn that, because of the way targeted ads are delivered online, their campaigns were often not reaching their target to the extent they believed. There is one main culprit for this, and that is, the cookie. The cookie is a piece of computer code that is placed on a computer’s browser when the user visits a particular website or performs a certain online activity (e.g. configuring a new car or providing demographic information, etc.). Cookies are also deposited each time a computer receives an ad as part of a specific campaign. The cookie uniquely identifies the computer and browser. In digital ad targeting, the cookie is used by ad servers in an attempt to identify the demographic or behavioral characteristics of the individual using the computer and the number of times the ad server should deliver an ad impression to each computer it sees.

It all sounds straightforward, but there are two main problems with relying solely on a cookie-based approach, and these problems have been illuminated via research from Comscore (and other third-party measurement providers). Using Comscore’s global research panel of 2 million Internet users who have given Comscore explicit permission to install measurement software on their computers, Comscore is able to continuously measure browsing activity, with an accurate measurement of individuals’ gender and age, as well as the number of times users receive an ad impression. Using Comscore’s technology means this information can be obtained without having to rely on cookies.

To better understand the potential flaws of cookie-based targeting and reporting, Comscore first studied the incidence of multiple-user computers and found that about 66% of Internet users are, in fact, on multiple-user machines. This means that using a cookie to identify the demographic profile of a user (as explained above) can be subject to substantial error, and thus can negatively impact the accuracy of one’s targeting. Take for example, a household with three users – a husband, a wife and their daughter. Because each of these three people use the same computer, the cookie cannot differentiate who is on the computer at any given point in time, and the ad server might deliver an ad that is intended to reach the male head-of-house to his daughter. When reporting delivery, the ad server would count the impression as one delivered against the male target, when, in fact, it was never seen by this individual and was instead “wasted” on his daughter.

In an actual example from a recent ad campaign shown below, we see what happens as a result of the inherent flaws of cookie-based targeting. The ad server is clearly unable to accurately identify the demographic characteristics of the users on the machines at the point in time that it delivered the ads. 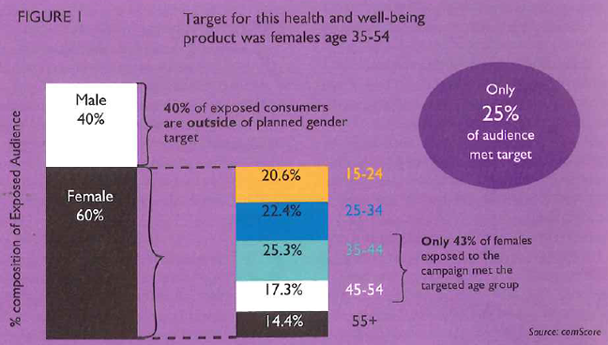 Comscore research also uncovered that about 30% of computers have their ad-server cookies deleted in a month, with a frequency of 4+ times per month. This can cause substantial error in the planned delivery of campaign’s reach and frequency. Take, for example, a campaign in which an ad server repeatedly delivers ads to a computer that has had its cookies deleted, believing that it is delivering the ad for the first time, when, in fact, the computer has received the ad multiple times throughout the course of the campaign. This typically causes an over-delivery of frequency and a corresponding under-delivery of reach.

Here is a real-life case example of this very scenario: 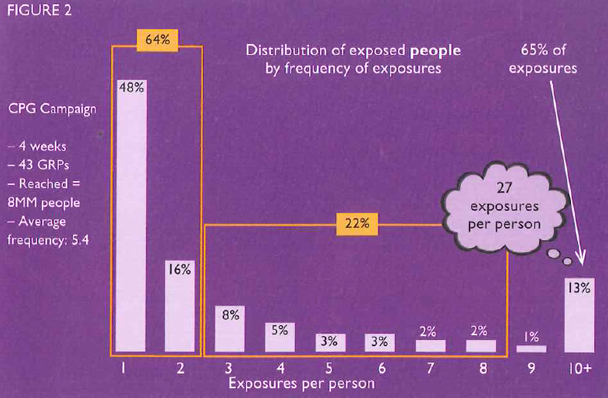 Using the Comscore panel to measure the true delivery of this digital campaign for a client, Comscore found that 65% of all impressions were delivered by the ad server with a frequency of 10+ per person, far exceeding the optimal level of 3 to 8 that the media plan required. Because of high cookie-deletion rates, the ad server kept delivering impressions to the same computers, believing that they had not previously received ads, when they actually had. Because the cookies were deleted, however, the technical evidence of the delivery was erased.

So, how should the digital ad industry address these issues to improve the accuracy of its targeting efforts?  At a recent meeting of the Association of National Advertisers (ANA), Aaron Fetters, associate director of Global Digital Strategy and Analytics for the Kellogg’s Company, outlined how Kellogg’s has attacked the problem. To eliminate measurement skews associated with multiple-user computers and cookie deletion, Kellogg’s tags its ads with a Comscore tag, allowing Comscore to receive information about the ad delivery. Comscore then uses this information, along with its panel, to truly understand who is receiving an ad (i.e. the actual person, not just the cookie) and at what frequency. This information is then fed to Kellogg’s and its ad agency in almost real time so that on-the-fly modifications can be made to the media plan, as needed. These modifications can involve shifting ad dollars from publishers who are unable to accurately reach the target segment with the desired frequency to those who can. By receiving this daily data throughout the duration of the campaign, advertisers no longer have to wait until the end of the campaign to understand the accuracy of their delivery. Instead, they can course-correct throughout the campaign, helping to eliminate wasted ad impressions and to avoid post-campaign ‘make goods’ (as is common with television advertising). According to Kellogg’s, this approach to measuring and validating ad delivery has delivered value in terms of both improved effectiveness and efficiency of their digital campaigns.

As digital advertising continues to evolve to reach its true potential as the most effective and efficient advertising medium, it is increasingly clear that ad delivery measurement and validation is a critical part of the advertising process. By leveraging the inherent ability of the Internet to deliver more ad impressions to a target segment in a given period of time than is possible with traditional media and by relying on third-party sources to verify accurate delivery, digital advertisers will be able to reap additional benefits in terms of even higher returns from their investments in digital advertising.

This article was originally published in the June 2012 issue of Admap magazine. Reproduced with permission of Admap, the world’s primary source of strategies for effective advertising, marketing and research. To subscribe visit www.warc.com/admap. © Copyright Admap.