Recently-released 2010 U.S. Census data reveals that more than half of the U.S. population growth between 2000 and 2010 was driven by Hispanics. During this time, the U.S. Hispanic population increased by more than 15 million people, now making them the largest minority group in the country at just over 16 percent of the population.

While the sharp rise in the U.S. Hispanic population makes it an important target for marketers, it may be difficult to reach this segment via traditional means. Approximately 23 percent of U.S. Hispanics speak Spanish exclusively at home, while 77 percent speak at least some Spanish at home and only 53 percent claim to speak English “very well.” Therefore, Spanish-language ads are likely necessary to effectively market to U.S. Hispanics. Fortunately, with ratings for  Spanish-language television channels such as Univision often outpacing major broadcast networks, powerful channels do exist to reach this attractive market segment.

Comscore recently conducted an analysis to identify drivers of effective TV advertising for U.S. Hispanics. The data set consisted of 38 ads representing 20 product categories that were tested among unacculturated Hispanics that speak primarily Spanish at home and at work and consume Spanish-language media.

While the Hispanic ads tested were on par with an average U.S. ad in terms of behavioral measures such as sales effectiveness and memorability, consumer feedback on attitudinal metrics indicated that there were positive and negative aspects to the ads. On the negative side, Hispanics found the ads to be less believable, difficult to relate to and understand, and more irritating than a typical U.S. ad. This suggests a need for advertising targeted toward Hispanics to be more credible. The attributes on which Hispanic ads outperformed the average U.S. ad include loyalty (the only brand for me), brand uniqueness, purchase intent, and a sense that they shared a lot in common with other product users.

Comscore measures the actual persuasion of an ad through a metric we call Share of Choice™, which reflects actual consumer preference for a brand among a competitive set. Thousands of Comscore studies have shown that lifts in Share of Choice correlate highly with actual in-market sales lifts for the advertised brand. In our data set for this study, approximately two-thirds of the ads were created specifically for the Hispanic market, while the other third were either adaptations of general U.S. market advertising or dubbed in Spanish. It was found that ads created specifically for the Hispanic market were 40 percent more persuasive than those simply adapted for this market and 3 times as effective as ads dubbed into Spanish. 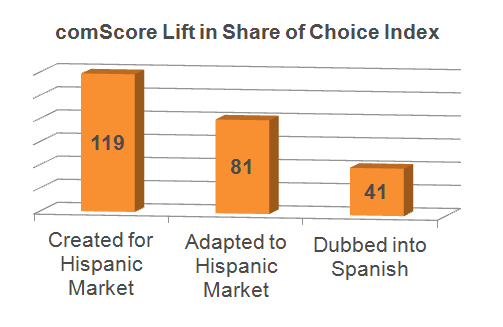 While nearly all ads identified the brand in the first half of the commercial, those that did not performed well below average, suggesting caution when using long blind lead-ins.

Finally, among the themes present in the stronger advertising, those that resonated among Hispanic women centered on quality time with family, making intelligent product choices, and aspirations to look young and attractive. Hispanic men tended to respond more to themes centered on portrayals of them as the “hero” and “avoiding embarrassment.”

While incorporating these learnings into your advertising won’t assure instant success, it can increase the likelihood that you will be creating advertising that effectively speaks to, and motivates, U.S. Hispanic audiences. At the end of the day, one of the best ways to maximize the impact of your campaigns is by evaluating the strength of your creative prior to its airing or publication and optimizing your ad quality early on. Comscore Creative Messaging and Optimization helps in this regard by using proven methods to predict the impression your creative will have. In targeting a rapidly growing segment such as U.S. Hispanics, this could spell the difference between advertising success and failure.