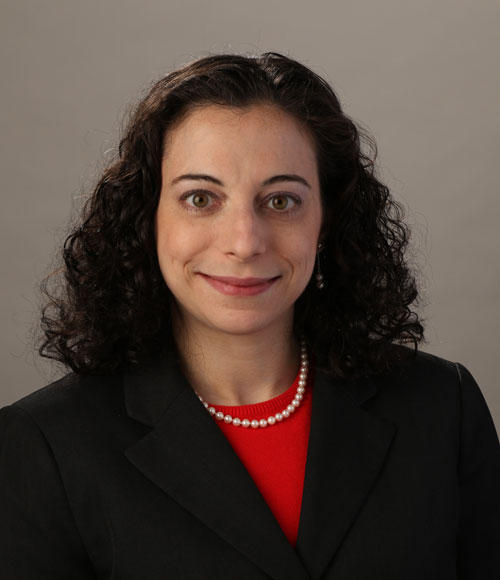 After a decline in traffic to healthcare.gov during the third week of open enrollment, traffic increased during the beginning of week four as the number of unique visitors reached 500,000 per day for the first time since October 10th. Shoppers Increasingly Looking for Information without Creating Accounts
Despite the increase in traffic, the percentage of visitors who performed activities such as logging-in and shopping for insurance plans decreased significantly during week four. Although more than a million visitors selected “Get Insurance” or “Apply Online” from the home page (up from 618,000 during week three), only 267,000 successfully logged in, marking the lowest total number of log-ins since the exchange was introduced. Slightly more than six percent of visitors initiated an application, down from nearly 15 percent in week three, while less than two percent of visitors finished the application process and continued to compare plans. Many visitors continue to take advantage of other means of applying for coverage that healthcare.gov offers, including over the phone or at a local office that offers application assistance.

As users continue to experience technical difficulties when creating an account, many are looking for ways to receive a premium estimate without having to log in. Nearly 700,000 unique visitors clicked on “See Plans Now” from the home page, which takes the user through a series of questions before presenting them with an estimated cost for health insurance. As application initiations and submissions decreased in week four, the number of visitors who received premium estimates increased from 135,000 in week three to just over 400,000 in week four. 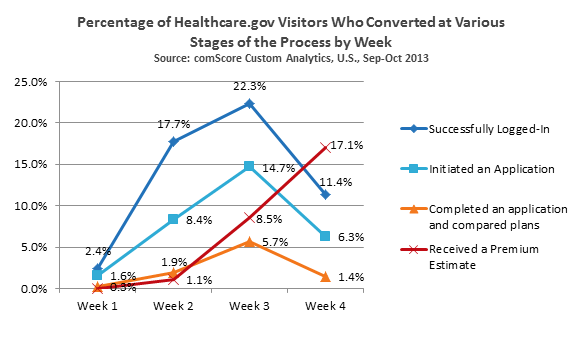 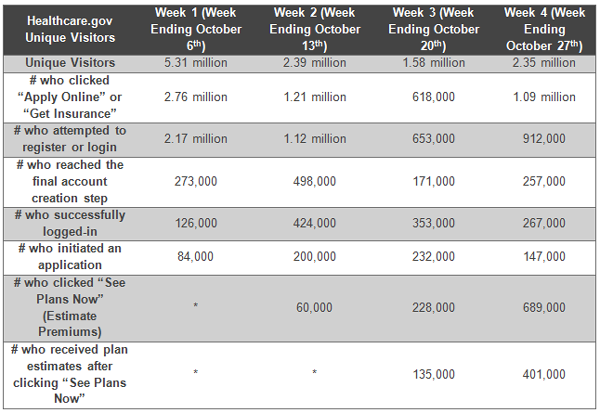 State sites alone attracted 1.2 million visitors in week four, nearly double the number of visitors during week three and not far behind the 1.5 million visitor total  they attracted during week one. California (coveredca.com) continues to have the most traffic of any of the state sites, with nearly 500,000 unique visitors during week four. New York, which maintains two separate domains (healthbenefitexchange.ny.gov and nystateofhealth.ny.gov), had the second most visitors with more than 250,000 combined. 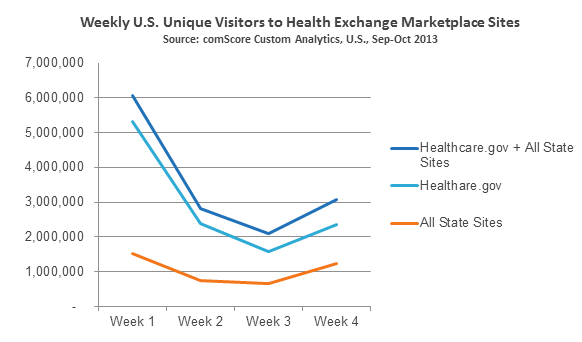 As the first month of open enrollment comes to a close, understanding shopping trends on healthcare.gov, state-specific marketplaces, insurers, and private aggregator sites can help companies make short-term tactical and long-term strategic decisions about their digital activity and participation in the new insurance exchanges. For more information on Comscore Health Insurance Exchange Measurement, which delivers detailed, aggregated and anonymous online usage metrics for the new Health Insurance Marketplace, please feel free to reach out to me at sengleson@comscore.com.