Each year it seems that discussion of holiday e-commerce shopping revolves around Cyber Monday, the most significant marketing event of the season. The first Monday after Thanksgiving earned its moniker in 2005 as retailers in general – and Shop.org specifically – brought to light the fact that online holiday shopping saw a huge spike in activity on this day. The ostensible explanation for this phenomenon was that as people made their way back into the office after the long holiday weekend, they continued their Black Friday shopping online, but from their work computers with high speed connections. In fact, Comscore has observed over the years that approximately half of all online spending occurring on Cyber Monday occurs via work computers.

Since its inception, we have witnessed an extremely strong growth in Cyber Monday spending with sales more than doubling from 2005-2010, with a compound annual growth rate of 16% during that timeframe. 2010 was an especially important year in the history of Cyber Monday as online spending reached $1.028 billion, the first time on record that a single day had eclipsed the $1 billion spending threshold. It also achieved another landmark by finishing as the heaviest online spending day of the year for the first time in history! 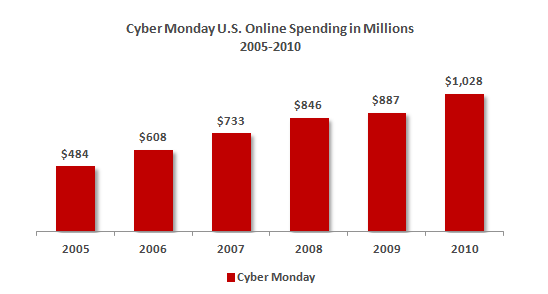 We at Comscore have spent a lot of time in past holiday seasons dispelling the notion that Cyber Monday was the heaviest online spending day of the year, and just when it seemed that message finally began to sink in, Cyber Monday has a banner year and jumps to the top of the ranking.

Interestingly, from 2005-2007 Cyber Monday wasn’t even close to the top of the ranking, going from the 8th heaviest spending day to 12th to 9th. But in 2008, Cyber Monday’s overall importance in the context of the holiday shopping season began to change as it surged up the ranking to #3. The following year it ranked as the second heaviest spending day, and finally culminated in 2010 assuming the top position for the year. 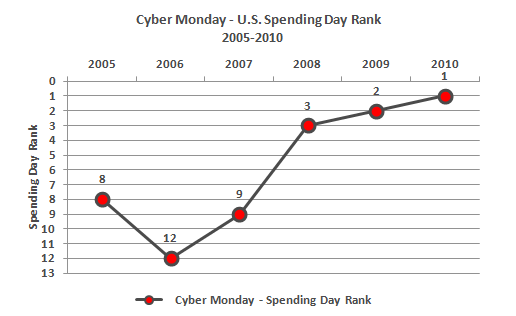 Many might be wondering what dynamics shifted Cyber Monday’s relative importance to the holiday season, and I suspect that there is a combination of factors at play. The first such factor was the recession that began with the 2008 financial crisis. That year saw retail spending pull back considerably and it was the first and only time in history that online spending growth was actually negative for the holiday season. Retailers resorted to significant discounting during the holiday season to induce consumer spending, and timed much of it to begin on Cyber Monday. The heightened importance of discounts raised overall consumer awareness of Cyber Monday, which I believe has spilled into subsequent years.

The second factor is the number of calendar days between Thanksgiving and Christmas. In 2008, Thanksgiving fell five days later than the previous year, creating pent-up consumer demand (since most spending picks up post-Thanksgiving) that likely gave Cyber Monday an additional boost that year. In 2009 and 2010 the number of days between holidays has expanded by one day each year, but the prime shopping season has remained somewhat shorter than average which has likely bolstered Cyber Monday spending.

Finally, I believe that consistent media coverage of Cyber Monday has helped to solidify consumer awareness of the day as an online marketing event over the years. In 2005-2007, the average consumer may only have had a vague understanding of Cyber Monday, whereas today the majority of consumers know what it is and the attractive types of deals they can anticipate. With increased awareness comes increased participation on the part of both retailers and consumers.

For Cyber Monday 2011, I think we will see another big spending day that will fall within the top 3 days of the year. Due to the relatively high number of shopping days between Christmas and New Year’s this year, it is likely that some of the early demand is smoothed out and that several of the days later in the season will contend with Cyber Monday. But I would not be surprised to see it reach a level of $1.2 billion as it once again kicks off the heavy part of the season of online holiday shopping.