As sociable beings in an interconnected world, our social networks have intuitive importance in our everyday lives. These networks influence the movies we watch, the music we buy, the parties we attend, and the friends we keep. Our associations – both on the web and in the real world – define us.

Facebook was the first widely successful means to document these associations. It distilled nebulous social relationships into structured data. Now, Facebook documents nearly every preference imaginable, from favorite brands to places to cooking and even workout routines. Although it began as a communication tool reserved for our closest friends, Facebook is no longer just a social network. Some, including Facebook itself, now call the network a “ social graph”.

Mindful of Facebook’s growing scope, we wanted to understand how Facebook’s fan pages relate to one another, which we did by applying network theory to Comscore’s Social Essentials data. We thought this would be useful to brand managers who face a daunting task in trying to understand a brand’s social media presence. By understanding how fan pages relate to one another on the web – the world’s most consumer-friendly communications medium – advertisers can better understand how audiences view themselves and their brands1.

Our analysis defines fan pages as the individual nodes in the network, and mutual fans as the relationship that links two distinct fan pages. This setup is a unique variation on prior analyses, which focused on relationships between people and not fan pages. For example, imagine that Jon Smith was a fan of Red Bull and MTV. In our analysis, those brands would be linked because Jon served as a common fan between them. For simplicity, we included all fan pages covered in Comscore’s Social Essentials product that met a minimum sample size threshold. This broad definition of a “brand” included entertainers like Lady Gaga and online games like Zynga Poker, which are brands in their own right.

Our brand-centric perspective gives brand managers a clear picture of how fans relate to them and other brands – including the competition. Our analysis revealed three key findings:

1. It’s a small world
We sampled the most highly connected pages, representing some 350 individual brands, to understand how many degrees of separation exist between them. By calculating closeness, a measure that indicates the extent to which a node can reach other nodes, we found that the average brand was just 1.8 degrees removed from all other brands, and that the greatest distance between any two brands was three degrees. 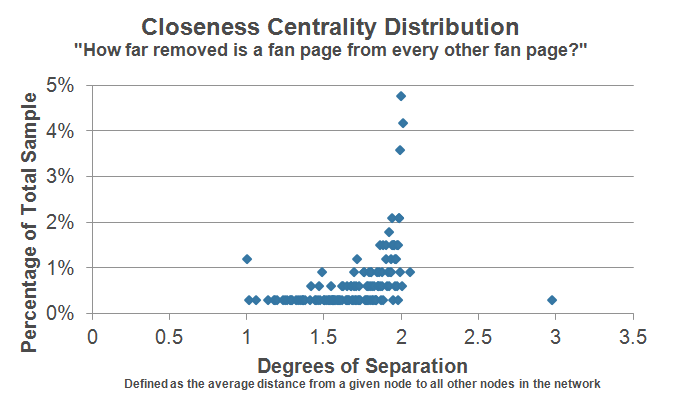 In a world where offline social networks are dense – Harvard psychologist Stanley Milgram’s famous “small world” experiments showed that people are just six degrees removed from one another – it’s no surprise that the online fan pages that summarize our social lives are even denser.

2. Size doesn’t matter
We analyzed the degree centrality of our network to find that the largest brand pages by fan count were not always the most highly connected. In fact, the brand most connected to other fan pages ranked just 9th by fan base overall.

A page’s degree is simply the number of other brands with which a brand has a direct connection. While the average fan page in our sample was connected to 50 other fan pages through common fans, Family Guy was connected to nearly 300 other fan pages. Facebook followed second, despite having about 16 million more fans than Family Guy. This data shows that brand popularity can take many meanings: a brand can either be popular among a large number of people, or it can be popular among a wide array of people. Which one matters more, though, depends on the marketer. Since degree reflects the number of relationships and not the strengths of those relationships, a high degree might suggest that a brand has mass appeal while a lower degree might indicate focused appeal. 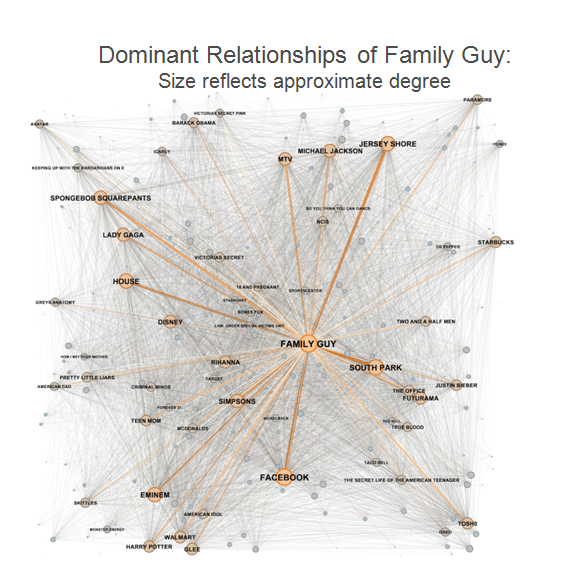 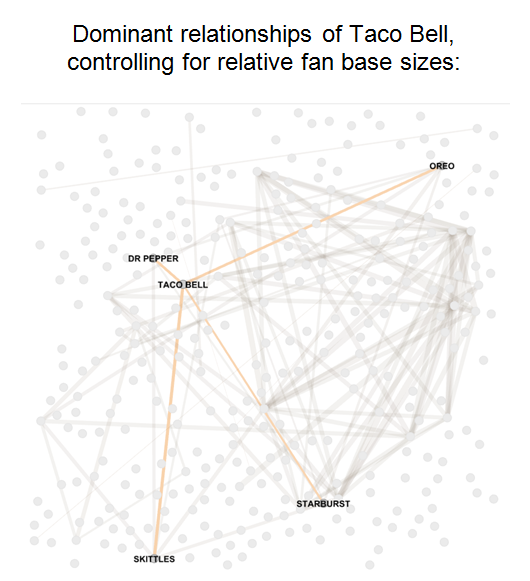 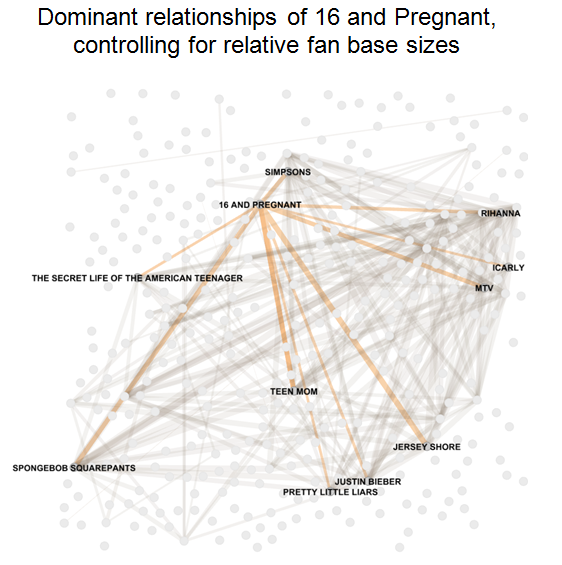 Although we show just two examples, similar relationships also exist for other brands. Armed with this knowledge, advertisers can know how the brand is positioned relative to other brands in the minds of their consumers. Could another brand be used in co-branding or co-promotional advertising? Is the brand “safe” from negative influences? Is the brand positioned consistently over time or is it evolving?

In a communication medium where brand managers have the least control over the message— think social vs. television—understanding precisely how consumers view a brand’s identity is invaluable for branding and tactical purposes. Comscore’s Social Essentials data yields this insight by identifying the other brands that jostle for space inside a consumer’s mind. It also provides actionable takeaways about audience targeting – for instance, consider revaluating a brand’s television ad buy if its ads are airing on a TV show that has weak audience overlap in the digital realm. According to Social Essentials, it could be an inefficient purchase.

1Jennifer Escalas & James Bettman. You Are What You Eat: The Influence of Reference Groups on Consumers’ Connections to Brands. Available at: http://faculty.fuqua.duke.edu/~jrb12/bio/Jim/53.pdf