Here’s a fun exercise: Go outside, walk to any public place and observe the people around you. No matter where you go, you’re bound to see countless people glued to their smartphones. If it feels like this is the case even more so now than it was a few years ago, you’re not imagining things. Comscore MMX® Multi-Platform and Mobile Metrix® December data was recently released showing that total smartphone consumption in the U.S. has nearly doubled from three years ago. In comparison, tablet usage was up 26% over that same time period and desktop usage was down 8%. 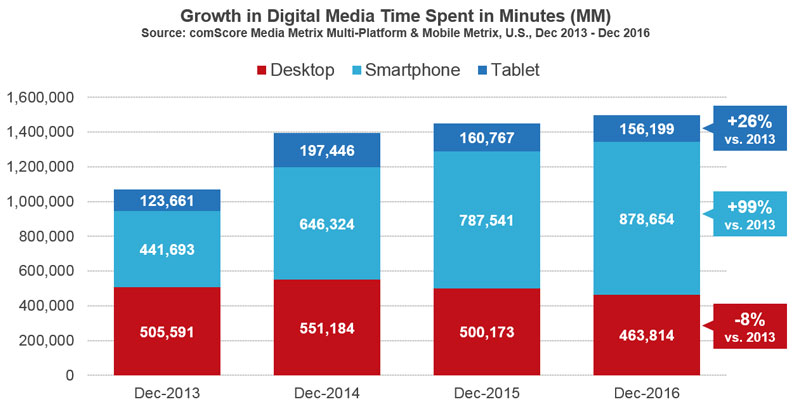 The last two years, in particular, have seen some interesting shifts in digital media consumption. Since December 2014, smartphones have driven all of the growth in digital media usage, as desktop and tablets have both experienced modest declines. This is remarkable because desktop usage had remained stable for a long time, even after the introduction of the smartphone, but only recently has it begun to decline.

So what is causing smartphones to finally begin to eat into desktop and tablet consumption? The best explanation is that the smartphone has clearly established itself as the consumer’s default device for accessing the internet. While the desktop computer held this distinction for many years, today when most people want to complete an online task they opt for their smartphone, which is more likely than not within arm’s reach. Increasingly, tablets and desktop computers are being relegated for specific use cases, such as e-reading or making a more involved e-commerce purchase. Some key factors contributing to the smartphone’s expanding digital role have been its growing screen size, faster 4G network connections, a greater number of available services and better optimized websites and mobile apps, all of which resulted in an improved user experience from just a few years ago. Eventually the device’s convenience won over the consumer, and those daily smartphone habits have become more and more engrained into our lives.

For more insights on the rise of mobile and the influence of its app ecosystem, check out our 2016 U.S. Mobile App Report today.