A Strong Start Expected for the 2018 Summer Box Office

The 2018 box office year is off to a rollicking start with a strong lineup of late 2017 holdovers and a slate of newer releases. So far, this year has been led by Disney’s latest $1 billion-earning Marvel smash hit “Black Panther,” as well as other big-budget popcorn movies that have resonated particularly well in the international territories including Warner Bros.’ “Rampage,” “Ready Player One” and “Tomb Raider;” and Universal’s “Pacific Rim Uprising.”

Also notable: two 2018 China-based releases, “Detective Chinatown 2” and “Operation Red Sea,” have generated a combined $1 billion in their home country alone this year. A diverse slate of titles – including films like the R-rated comedy “Blockers” from Universal, Fox’s release of Wes Anderson’s acclaimed stop-motion epic “Isle of Dogs” and, of course, John Krasinski’s unexpected breakout horror hit “A Quiet Place” from Paramount – makes this a great time to be a moviegoer.

With the year’s first quarter solidly in the books, we look ahead to the summer movie season, which officially starts on Friday, May 4th. The start of the season will benefit from Disney’s presentation of Marvel’s “Avengers: Infinity War,” which has already earned an updated global total of $857.3 million through Wednesday, May 2nd. 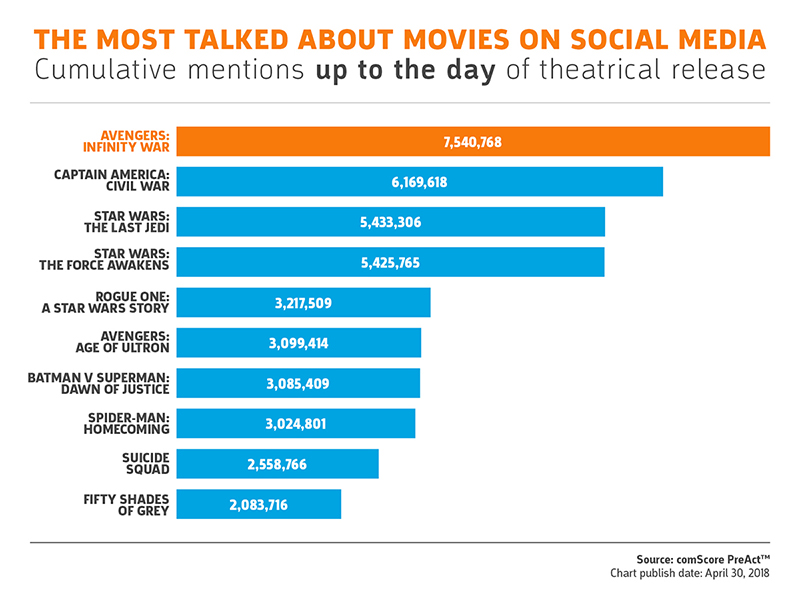 And while “Avengers: Infinity War” may have already established itself as the number one opening weekend for a film of all-time, there is still a lot to anticipate in the months ahead. The summer of 2018 boasts a massive number of potential hits including new installments from the “Jurassic World,” “Mission: Impossible” and “Deadpool” franchises; as well as “Solo: A Star Wars Story;” the next film from Pixar, “Incredibles 2;” Marvel’s “Ant-Man And The Wasp;” “Oceans 8;” and “Hotel Transylvania.” These titles, and a host of other incredible films, will hit multiplexes during this all-important moviegoing season.

Looking back, the 2017 box office year was a historic one for cinemas around the world, with record global ticket sales of $40 billion – $29.5 billion in the international marketplace and the third consecutive $11 billion-plus year in North American theaters. This new revenue benchmark was powered by an assortment of diverse and exciting films representing all genres from every studio, driving enthusiastic moviegoers to the more than 125,000 screens in 25,000 plus theaters across the globe that are tracked by Comscore. 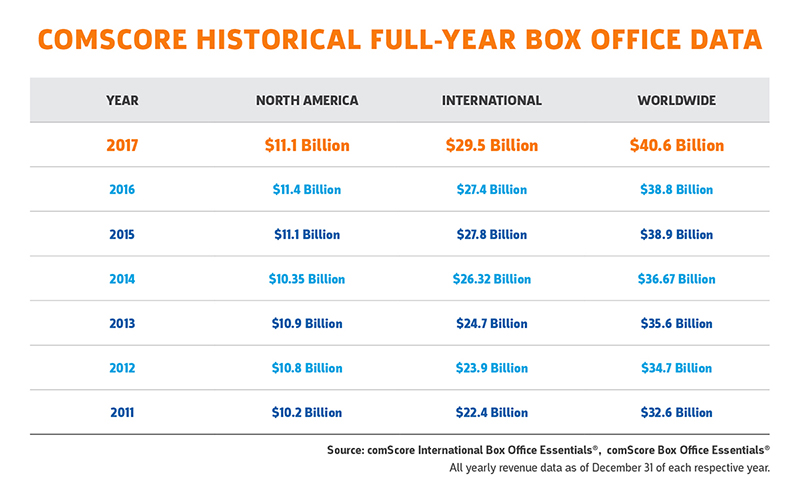 In 2017, patrons flocked to films like Disney’s “Star Wars: The Last Jedi” and “Beauty and The Beast,” Sony’s “Jumanji: Welcome to the Jungle” and “Spider-Man: Homecoming,” Warner Bros.’ “Wonder Woman” and “It,” Fox’s “Logan” and “The Greatest Showman,” as well as Paramount’s “Transformers: The Last Knight” and “xXx: The Return of Xander Cage.” In addition, China-based titles were well represented with “Wolf Warrior 2” and “Never Say Die” adding big dollars to the bottom line. And last, but certainly not least, Universal boasted the animated hit “Despicable Me 3” and “The Fate of The Furious,” which holds the distinction of being the top-grossing film internationally in 2017.

These films, and many others, worked in synergistic precision with technologically-advanced theaters to offer an incredible in-theater experience to satisfy movie fans around the world during the year.

While there are many challenges facing the industry and enormous competition from a bevy of small screen platforms, it is clear that the movie theater experience remains a singular, essential and enduring part of our collective and global entertainment experience…in the summer months and beyond.