Each quarter, Comscore releases global industry benchmarks from the billions of impressions it measures through validated Campaign Essentials to give the industry a better understanding of relative campaign performance.

These benchmarks provide useful baselines for comparison, though it’s important to remember that observed metrics for any individual campaign can vary greatly depending on a number of factors, including campaign objective, quality of creative, size of creative, size of audience target, placement strategy, and industry vertical.

While viewability is a critical component of evaluating ad performance, it should be used as a diagnostic measure to qualify exposure, not as a metric of effectiveness. Viewability is necessary, but not sufficient, to drive effectiveness or impact.

In the U.S., mobile ads saw higher in-target rates on average (53%) when compared to desktop (49%) and this disparity was even more pronounced for a handful of major product categories, such as CPG and Telecom. Higher in-target delivery on mobile may be due to the fact that it’s easier to deliver against the right audience on primarily single-user devices vs. multiple-user desktop computers.

Impressions were less likely to be viewable and more susceptible to invalid traffic when delivered programmatically. This is especially true for video, where programmatic magnifies the IVT issue. 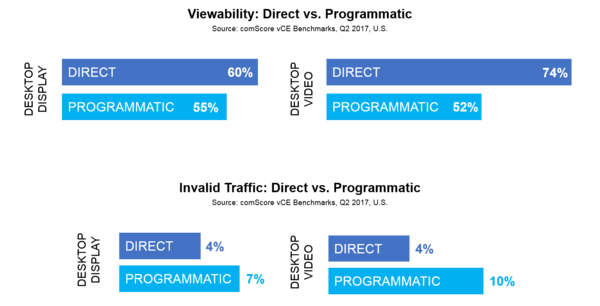 This low viewability for video advertising in programmatic goes hand-in-hand with high IVT, which is a key driver of low viewability. Because there is more opportunity for bad actors in the programmatic space, they will often target video inventory, which has higher average CPMs than display advertising – and is therefore more lucrative for fraudsters.

Better manage your campaigns with KPIs

To give your campaign the greatest chance at success, it is vital to minimize the impact of ads that can’t been seen by a human or are outside of the intended audience target. Key metrics for viewability, invalid traffic, and in-target delivery can help marketers understand how their campaigns are performing, allowing them to focus more broadly on the measures that indicate impact.