Comscore today announced its latest innovation in ad effectiveness measurement with the introduction of the Smart Lift Attribution Model™. This new methodology, currently being applied to AdEffx Brand Survey Lift™ studies in the United States, overcomes the issue of ‘last exposure’ bias, allowing for the proper allocation of display ad campaign performance to the specific publishers, data and advertising creative that generate lift. To understand why this innovation is so important to the industry, let’s first travel back a few years in time to evaluate the evolution of ad effectiveness measurement.

In the early days of display advertising, the digital economy was deeply entrenched in the use of the click-through rate for evaluating online ad performance, and only insomuch as it led to a direct sales conversion on a website. This over-reliance on the click caused many to view digital advertising as merely a direct response tactic, rather than for strategic brand building.

In 2007, Comscore (along with research partners Starcom and Tacoda) released results from the Natural Born Clickers study, which demonstrated the perils of relying on the click for measuring display ad performance. The study found that only 6% of Internet users – who were not representative of the total Internet population – accounted for 50% of display ad clicks in a given month. This provided strong empirical evidence that the click was not a holistic measure of display advertising performance. Ultimately, this research helped to support the belief that measuring the effect of any type of advertising by relying solely on the CTR means leaving a lot on the table for all involved parties.

Around the same time, the Atlas Institute released a seminal research paper entitled “ Engagement Mapping: A New Measurement Standard is Emerging for Advertisers,” (PDF) which gave voice to the issue of last-click attribution. The paper noted: “The current ‘last ad’ model attributes 100% of the credit for a conversion to the last ad seen or clicked. This is the current standard the industry has relied on to justify their digital media spend. The problem with this approach is that it ignores the contributions of any previous ads that led the customer down the road to that conversion.”

These types of measurement issues, along with the industry’s over-reliance on the click, encouraged many in the industry – including Comscore – to engage in research to prove the value of display advertising beyond the click. In late 2008, Comscore released another groundbreaking research study known as Whither the Click?, which provided proof that view-through exposure to display ad campaigns – even in the absence of a click – drove lifts in consumer behavior, including website visitation, trademark searches, online sales and offline sales. These results conclusively illustrated that exposure to display advertising campaigns generated a branding impact resulting in latent behavioral lifts, including sales conversion.

Finally, our industry began to think about display ad campaigns in a new way, where measurement beyond the click mattered and we began to give credit where credit was due. In the past three years, through a steady drumbeat of corroborating research, the digital advertising industry has come a very long way in demonstrating the view-through impact of display advertising.

Yet despite this progress, there is still significant room for improvement in measuring display ad effectiveness, especially as it pertains to branding. More specifically, the prevalent methodological approach for conducting this sort of research has been plagued by its own bias – ‘last exposure’ attribution. Current research methods that are based on surveys of Internet users typically attribute one hundred percent of the branding effect of an ad to the publisher or creative associated with the survey respondents’ last exposure to the ad prior to, the survey experience. This approach not only ignores some of the legitimate branding impact of the campaign, but also misattributes to a single publisher and creative credit that should be shared across publishers and creative types, thus hindering holistic effectiveness measurement and truly accurate campaign optimization.

For a more detailed understanding of how the Smart Lift Attribution Model works, take a look at the following infographic. Want to learn more? Please contact us today. 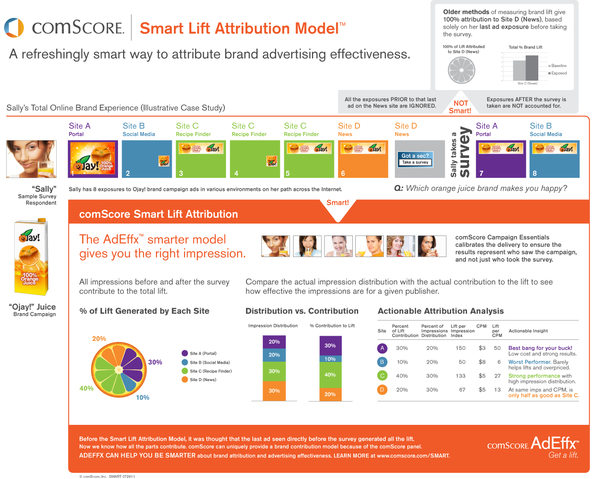