We’re now in the thick of the 2015 online holiday shopping season, and the shopping dynamics this year are as interesting as ever. And while I could pontificate on any number of fascinating storylines, I keep coming back to one overarching theme:

Allow me to explain what I mean…

But I would contend that we must think beyond this convenient parallel structure of the emerging channel cannibalizing its parent channel. What we’re really seeing is the offline cannibalization leapfrogging traditional e-commerce and coming directly from what’s happening on mobile.

How do we know this? Let’s consider first what’s happening in offline to understand how the largest buying channel – which still accounts for about 85% of consumer discretionary purchase – has fared during the season-to-date. ShopperTrak reported a 10-percent decline in brick-and-mortar retail sales on Thanksgiving weekend.

At the same time, what have we been seeing happening in the online sector? Desktop retail traffic has been seeing modest gains in the single-digits, not much different than what you would expect given overall growth in the online population. But mobile traffic is a different story altogether, with growth rates on the key shopping dates running anywhere from 40%-80% year-over-year. That is a massive influx of mobile traffic, and given the magnitude of these gains one can easily see how several large retailers experienced server outages on their sites on the big shopping days. 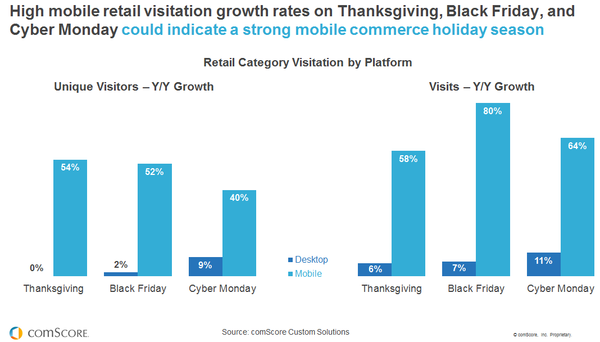 Of particular interest are the retail traffic trends as we move through the season. The graphic below shows the number of daily desktop, mobile and multi-platform visits to the retail category. There are a handful of key takeaways here: 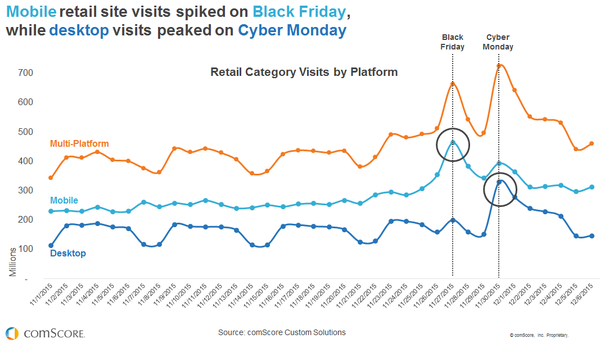 Taking all of these trends together, it’s plain to see that mobile has exploded as a shopping channel – likely much more so than retailers had anticipated. And with the continued softness in brick-and-mortar traffic, it’s only reasonable to conclude that mobile is finally eating into that channel in a meaningful way. And not just from the standpoint of traffic, but also in terms of dollars and dollar growth. In fact, if you take the expected overall growth in spending for the holiday season of 4.3 percentage points, the growth contribution breaks down evenly between brick-and-mortar and e-commerce at just over 2 percentage points apiece. And the e-commerce component is a roughly even split between desktop and mobile, with each contributing a little more than one percentage point.

As we head into the final weeks of the holiday shopping season, let’s keep in mind the importance of mobile. The negative headlines around brick-and-mortar are a clear sign of changing behaviors, but not necessarily a sign of weak consumer demand. There’s a channel shift in full effect, and it is very rapidly moving in the direction of mobile.