RESTON, VA, November 25, 2007 – Comscore, Inc. (NASDAQ: SCOR), a leader in measuring the digital world, today released an update of holiday season e-commerce spending covering the first 23 days (November 1 – 23) of the November – December 2007 holiday season. More than $9.3 billion has been spent online during the season-to-date, marking a 17-percent gain versus the corresponding days last year. Online retail spending was strong on both Thanksgiving Day (up 29 percent to $272 million) and “Black Friday” (up 22 percent to $531 million), outpacing the season-to-date growth rate.

“The Friday after Thanksgiving is known for heavy spending in retail stores, but it’s clear that consumers are increasingly turning to the Internet to make their holiday purchases,” said Comscore Chairman Gian Fulgoni. “Online spending on Black Friday has historically represented an early indicator of how the rest of the season will shake out. That the 22-percent growth rate versus last year is outpacing the overall growth rate for the first three weeks of the season should be seen as a sign of positive momentum. Online retailers will also certainly be paying close attention to what happens on Cyber Monday, which will provide an even clearer indication of what lies ahead for the rest of the season. Based on the growth rates we’ve seen so far this season and historical consumer behavior patterns, we would expect Cyber Monday sales be even stronger than Black Friday’s and to exceed $700 million. While this would make it the heaviest online shopping day on record, we can expect to see even stronger days ahead as the 2007 shopping season progresses into December.”

The hottest category continues to be video games, consoles & accessories, which is up 134 percent versus the corresponding days last year. Sales of Nintendo Wii, PlayStation 3, and popular game Halo 3 continue to drive growth in the category. The furniture, appliances & equipment category (up 36 percent) is joined by consumer electronics (up 21 percent) and sport & fitness as the retail categories demonstrating above average growth. Apparel & accessories is now growing in line with the overall trend in online retail following a soft start to the season when warm weather dampened winter apparel sales. Online sales of toys are up just 9 percent for the season-to-date, with toy safety concerns appearing to be weighing down the category. 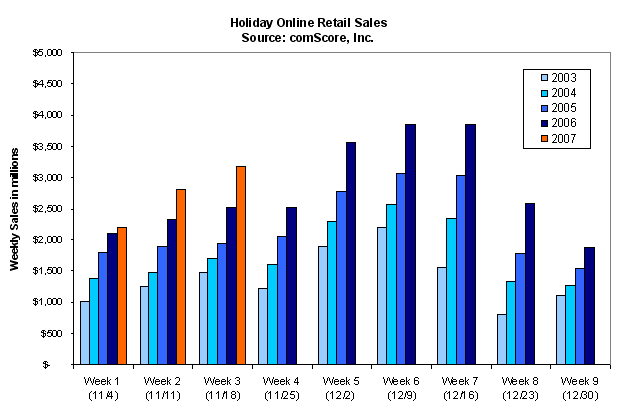 Please contact press@comscore.com to receive the data behind the above for use in graphical representation.

Comscore, Inc. (NASDAQ: SCOR) is a global leader in measuring the digital world. This capability is based on a massive, global cross-section of more than 2 million consumers who have given Comscore permission to confidentially capture their browsing and transaction behavior, including online and offline purchasing. Comscore panelists also participate in survey research that captures and integrates their attitudes and intentions. Through its proprietary technology, Comscore measures what matters across a broad spectrum of behavior and attitudes. Comscore analysts apply this deep knowledge of customers and competitors to help clients design powerful marketing strategies and tactics that deliver superior ROI. Comscore services are used by more than 800 clients, including global leaders such as AOL, Microsoft, Yahoo!, BBC, Carat, Cyworld, Deutsche Bank, France Telecom, Best Buy, The Newspaper Association of America, Financial Times, ESPN, Fox Sports, Nestlé, Starcom, Universal McCann, the United States Postal Service, Verizon, ViaMichelin, Merck and Expedia. For more information, please visit www.comscore.com.