2.8 million people accessed a social media site in New Zealand during November 2013. This category reached 94.6 percent of the total Kiwi internet audience. Facebook was the clear leader with 1.95 million unique visitors; more than double that of LinkedIn who came in second place with an audience of 798,000 unique visitors.

Analyzing the demographic profile of these social media sites in more detail shows that the professional networking platform, LinkedIn, attracted a large share of the older population with two thirds of their users over the age of 35 (68.6 percent), whilst more than half (55.3 percent) of Tumblrs users are under 35. Facebook and Blogger share a similar audience composition, where the number of visitors aged 15-24 accounted for the largest segments of the Kiwi audience whereas people aged 55+ made up the biggest proportion of LinkedIn users in November 2013. 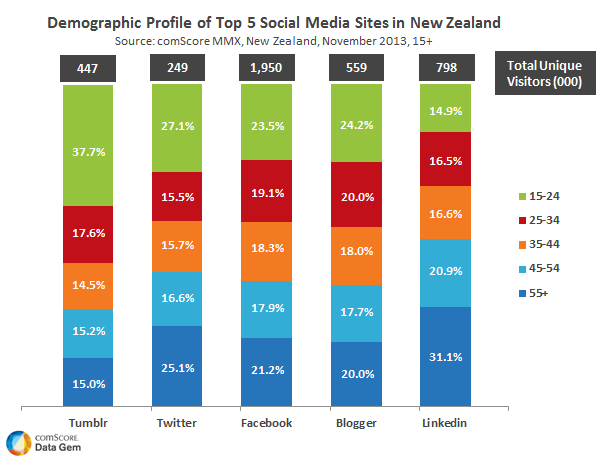