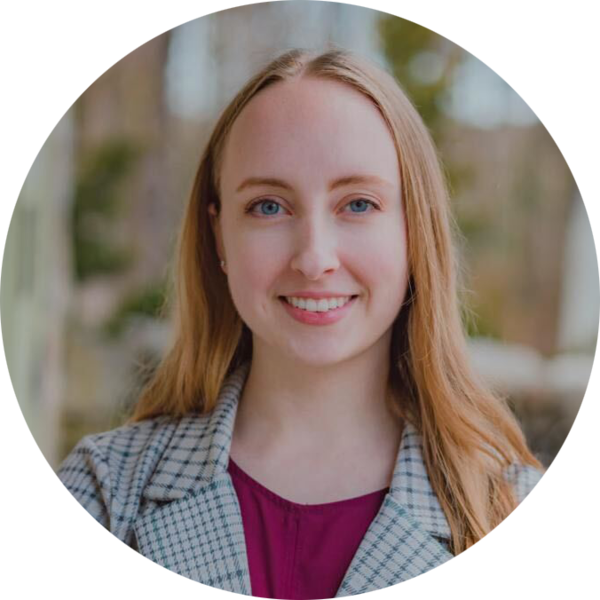 We take a look at the conversation dominating social media on news of the death of Queen Elizabeth II on September 8 and in the days after.

While communication advanced from telegrams to tweets during her reign, global engagement at the announcement about the late Queen across Facebook, Instagram, Twitter, and TikTok accounted for 238.7 million actions globally from September 8th – September 15th. 53.5 million of those actions were from brands & publishers in the UK.

As Her Majesty was head of state of 15 nations including the United Kingdom, Australia, Canada and New Zealand, the reaction has been an international one. Posts from brands & publishers in the US alone accounted for 69.5 million actions across Facebook, Twitter, Instagram, and TikTok in the days following the news.

The Instagram post announcing her death from the Royal Family was the #3 piece of content by total actions across the globe from any brand or influencer on September 8.

There were over 88.3 million video views on TikTok mentioning the Queen, with the top post coming from MSNBC.

Posts mentioning King Charles totaled over 326.7 million actions across Facebook, Instagram, Twitter, and TikTok in the week following the Queen’s death. The number one post overall was NBC’s TikTok of King Charles’ tribute to his late mother with 10.9 million total views.

The Royal Family’s reel of King Charles’ personal declaration had 736 thousand actions, and was the top post from any UK brand or influencer. 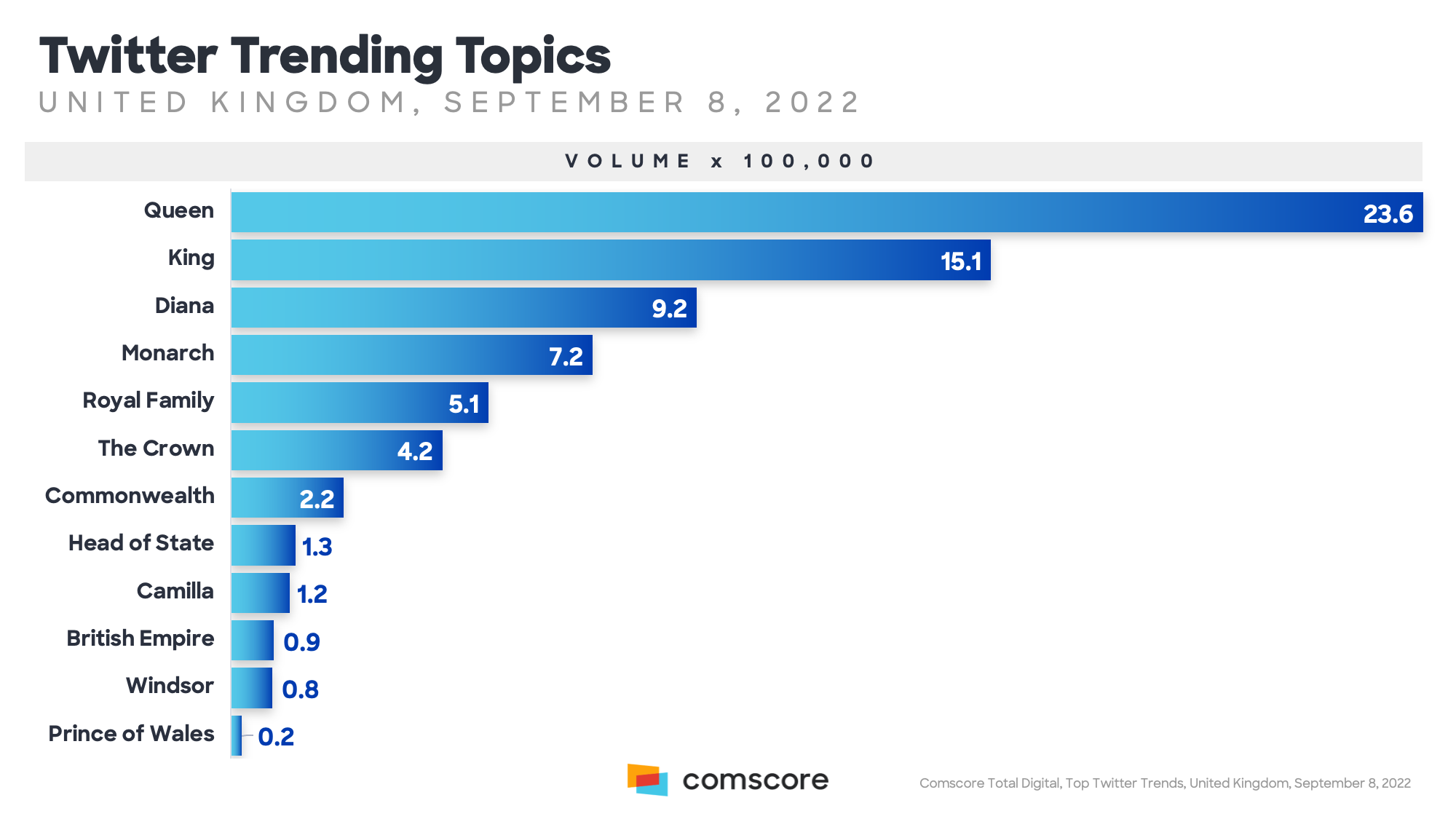 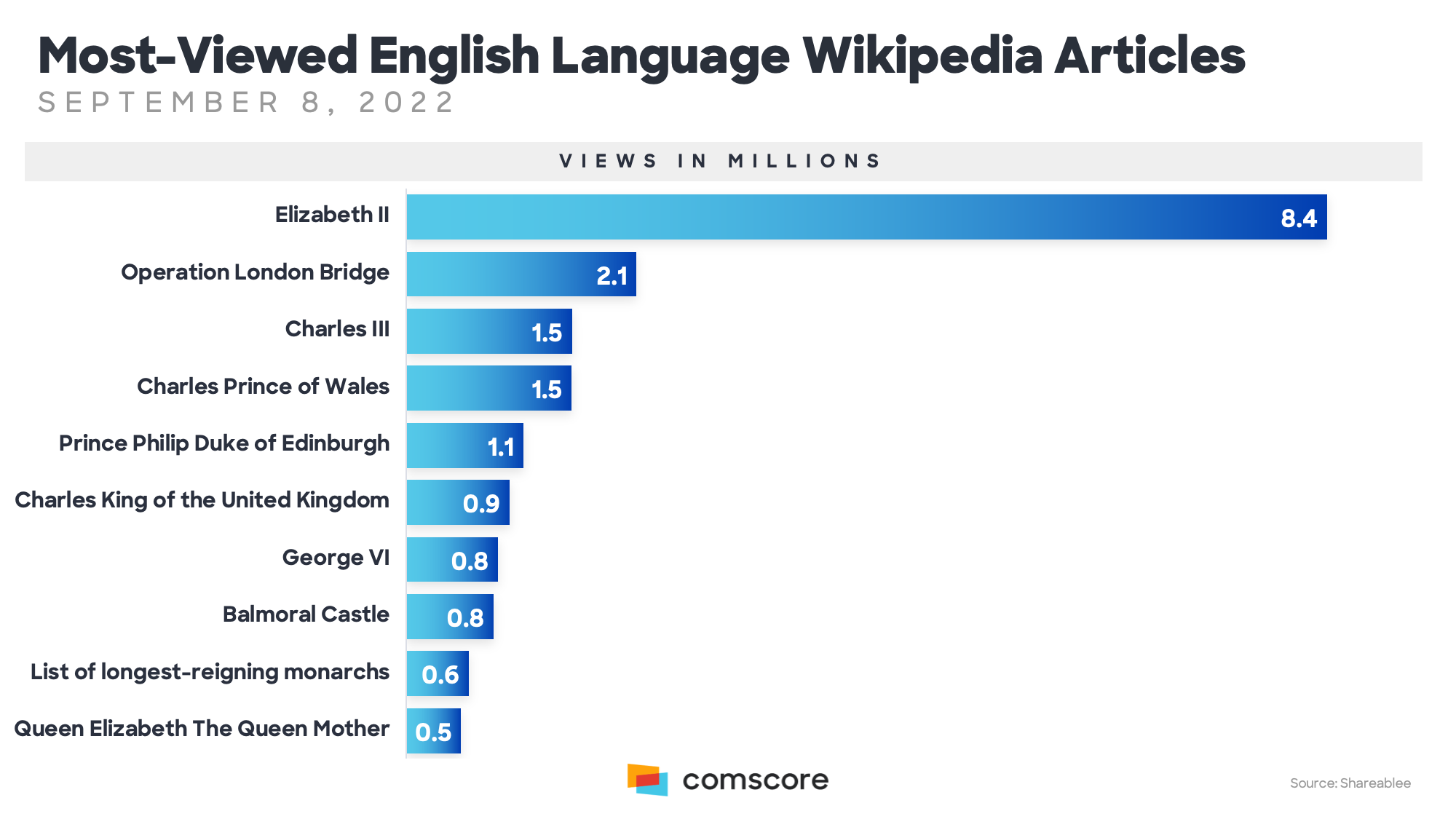 Top trending News & Politics videos in the UK on YouTube on September 8, 2022

The day after Queen Elizabeth II passed, ABC aired a dedicated special – Queen Elizabeth II: Passing of the Crown, A Special Edition of 20/20. When analyzing how this telecast performed across some of the largest U.S. markets, New York saw the largest average audience of 208K TV households. However, the Chicago market garnered the highest local rating of 6.5%, suggesting a higher concentration of TV households tuned in.