Spending Growth Strongest in Mid and Upper Income Segments, Driven by Increase in Dollars Spent per Buyer, while Lower Income Households are Seeing an Increase in Online Buyers

*Corresponding days based on corresponding shopping days (November 2 thru December 5, 2010)

“This most recent week of online holiday shopping, known as ‘Cyber Week,’ reached record spending levels as three individual days surpassed the billion dollar threshold,” said Comscore chairman Gian Fulgoni. “We are now entering the portion of the season when online retailers typically reduce their promotional activity as they attempt to restore their margins, which can sometimes contribute to temporary softness in spending growth rates. However, this will likely be immediately followed with an acceleration in the spending rate as we approach the middle of December, which is sure to bring us several more billion dollar online spending days.”

Comscore analyzed consumer spending patterns for the holiday season-to-date to understand which particular factors are driving the strong growth rates of 15 percent. The strongest overall spending gains have been driven by the mid-income segment (households earning $50,000-$99,999) at 19 percent, while spending among upper-income households ($100,000 and higher) is growing at a rate of 16 percent. Lower-income households (Under $50,000) are seeing a more modest increase of 9 percent.

In a departure from the past couple of years when the growth in number of buyers was the predominant driver of online spending growth, the majority of this year’s gains are being driven by an increase in spending per buyer. In fact, the number of buyers overall has increased just 3 percent compared to a 12-percent increase in dollars per buyer.

“We have seen some indications that mid- income Americans might be experiencing ‘austerity fatigue,’” added Mr. Fulgoni. “After spending the last couple of years increasing their personal savings in an effort to get their finances in order, some appear to have decided they are done pinching pennies and are increasing their spending by taking advantage of the many promotions and price discounts that online retailers have been offering in the first half of the holiday shopping season. The appeal of lower prices that can be found on the Internet is also undoubtedly a driver of the acceleration of the shift from in-store buying to e-commerce that we are witnessing among all income segments this season.” 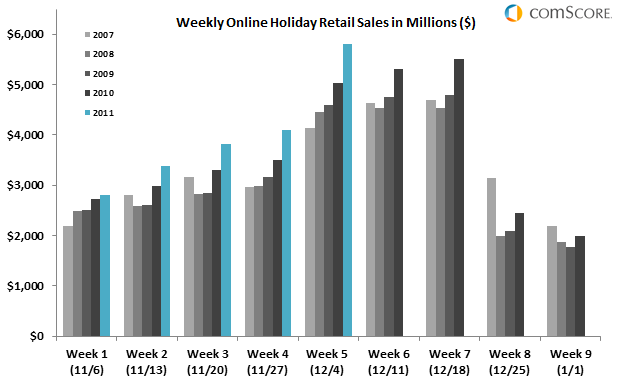