During a recent conversation with our friends at NPD (the company, incidentally, where I began my career), they shared with us an interesting bit of Internet history. Many of you may not be aware that back in the mid 90’s, NPD measured Internet audiences through a business unit known as PC Meter. PC Meter would eventually become Media Metrix, whose U.S. business was acquired by Comscore in 2001.

That brief history lesson aside, we all got a kick out of looking at the very first data collection from PC Meter, which dates back to early 1996, showing the list of the 20 most visited websites among U.S. Internet users. Remember that in 1996 most people in the U.S. population were still not able to access the Internet, and Commercial Online Proprietary Services dominated the phone lines. NPD’s launch sample for collection was based on only 287 U.S. Internet users. (Today, Comscore’s sample covers approximately 1 million U.S. users.)

The list of top domains in 1996 includes a few names that are very much still around and among the biggest Internet companies, while many others have long since been acquired or forgotten. Ranking at the top of the 1996 list was AOL.com with a penetration of U.S. Internet users of 41%. Webcrawler.com ranked second at 33%, followed by Netscape.com (31%), Yahoo.com (29%), and Infoseek.com (21%).

Several Internet Service Providers also featured prominently on the list, such as Prodigy.com, Compuserve.com and Primenet.com, as did a handful of university web domains such as UMich.edu, CMU.edu, MIT.edu and UIUC.edu (at least one of which was apparently a pioneer in file-sharing of adult content!).

Interestingly, AOL and Yahoo! have withstood the test of time and continue to rank among the top 5 U.S. web properties. Yahoo! Sites is currently the #2 U.S. web property with a penetration of 83%, while AOL, inc. is #5 with a penetration of 52%. While many large businesses would expect to last 15 years, the speed and pace of change in the digital world tells us that survival is significantly less predictable than in more traditional and established industries. 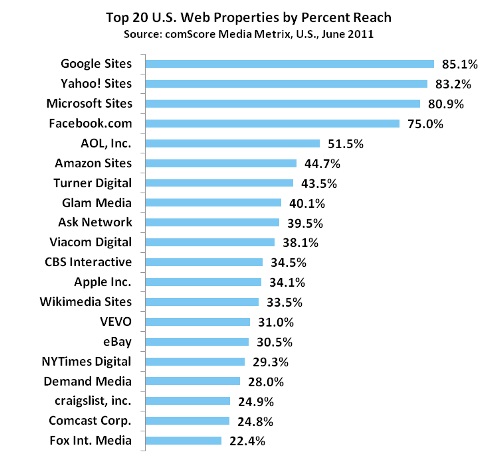 Anyway, thanks again to the good folks at NPD for sharing this tidbit of Internet lore, which serves as a wonderful reminder of how far we’ve come in the past fifteen years and, possibly, how much more change might be in store as the digital world continues to evolve.

Filmmaker Interview - Rod Rinks Director of "Made In Mexico"...