Facebook Graph Search: What Happens When Utility and Frequency Collide?

Facebook Graph Search: What Happens When Utility and Frequency Collide?

With Facebook’s widely covered recent announcement that introduced Graph Search, many are asking whether or not this new brand of search has the ability to both gain traction among users and disrupt the current “Google habit”.

Habits are hard to break. Whether it’s smoking, drinking, or something as benign as leaving your dishes in the sink as opposed to putting them directly into the dishwasher, years of quickly broken New Year’s Resolutions suggest that permanent changes in established behavior are easier said than done. Such ingrained behaviors can manifest themselves in a variety of ways, from physical repetition to brand loyalty. Just try getting a Starbucks aficionado to go to Dunkin’ Donuts sometime…

Online habits are no different, and there is no more ingrained habit for most of us than striking that 10-key combination g-o-o-g-l-e-.-c-o-m in a single motion in about half a nanosecond. That hardwired habit is an influential source of Google’s search-related staying power. Ultimately the strength of this habit is a function of two interrelated variables: utility and frequency. There is value in either variable independently, but when combined they reinforce one another. Google clearly occupies the coveted upper-right quadrant on the utility-frequency matrix, and for Graph Search to become an unmitigated success it will need to shoot for a similar space. 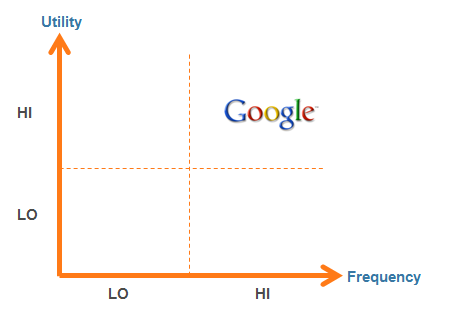 Dictionary.com defines “Utility” as: something useful; a useful thing. I have a hard time defining Google’s value proposition better than that. Google is useful because it is very good at delivering its users with the right information in a highly efficient manner. With its scale advantages, it has plenty of useful user data to continually refine algorithm that ensure this utility remains strong from an informational standpoint.

The next layer of utility in search extends beyond information to incorporating social elements. As the amount of information indexed on the web continues its exponential expansion, social provides a useful filter to help surface the most relevant information. To enhance the overall utility of its searches, Google launched Google+ in 2011, giving a social infrastructure to all of its properties that would increase its ability to incorporate social signal within its search results.

With Graph Search, Facebook begin with a very strong social signal but less utility from a pure informational standpoint. This means that users, at least in the initial iterations of Graph Search, are likely to rely on it in instances when they specifically want information as seen through the social lens. Certain Graph searches may provide very high utility (e.g. “Which Sushi restaurants do my friends like in San Francisco?”) that directly influences your decision-making, but the question is how often they will make searches of this nature.

Another key aspect to the “Google habit” is that it gets continually reinforced, day in and day out, just like brushing your teeth. (Actually, Google may even be more habitual than brushing your teeth because the average person conducts 3 searches a day but probably only brushes twice.)

Similarly, people who visit Facebook do it very frequently (about every other day on average) for a significant amount of time (about 6 hours per month on PC alone). This presents an enormous opportunity to develop Graph Search into a more deeply ingrained habit.

But the devil’s in the details.

Ultimately a new search habit will only arise if Graph Search can deliver at the intersection of high utility and high frequency. The upper right quadrant is certainly something to drive for, and it will require greater emphasis on the utility dimension if Facebook hopes to leverage its strength on the frequency dimension.

That said, Graph Search certainly provides unique benefits to users and incremental monetization opportunities to Facebook. Graph Search is a worthy exploration in the new frontier of search and it will be very interesting to watch it develop in the coming months…

This post was originally published to Search Engine Watch on 1/28/13.

This post was originally published by Search Engine Watch on 1/28/13.