Hello, my name is Ian Eccleston from the Marketing Communications department at Comscore. I'd like to share with you some rather interesting Comscore data related to rocketing gas prices.

Average U.S. gas prices recently reached a record high of $4.09 per gallon in the week of June 9, according to the U.S. Energy Information Administration. This hasn’t been good news for consumers and most businesses, but it has generated a lot of traffic to the Gasbuddy Organization, the largest web property which publishes the location of the cheapest gas prices available within local areas. Gasbuddy recorded a record high of 2.5 million unique visitors in May 2008 according to Comscore Media Metrix. Interestingly, Gasbuddy's Web traffic and the fluctuation in average monthly gas prices have a striking correlation, as shown in the chart below. 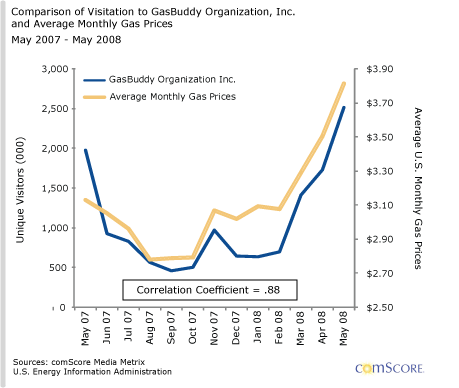 Not surprisingly, the top-performing search terms for Gasbuddy in April 2008 were phrases that include “gas prices”, according to Comscore Marketer, a service from Comscore that helps clients optimize their search engine marketing programs. One hundred percent of the clicks on these terms that lead to GasBuddy are organic, likely driven by SEO tactics such as including “gas prices” in the URLs of GasBuddy sites, such as www.newyorkgasprices.com and www.illinoisgasprices.com.

Nearly 1 million people conducted 1.73 million searches for phrases including “gas prices” in the U.S. in April 2008, according to Comscore Marketer, an increase of 175 percent from April 2007. When average gas prices increased 10 percent from October to November – the largest monthly increase by percentage in the last year, many consumers rapidly made their way to the search box to find deals on gasoline, as shown in the chart below. 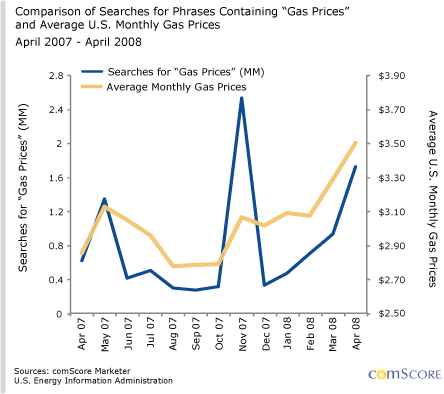 GasBuddy was the happy beneficiary of these searches – 37 percent of the searches for “gas prices” phrases clicked through to a GasBuddy site, driving 640,000 visits from the U.S. to the property in April 2008.

It’s interesting to see how Web behavior/search activity often reflects our everyday concerns in the offline world. As the data above show, many consumers are using the Web to try to find a way to minimize how much they have to spend on gas. It's not dissimilar to the way that consumers are increasingly using online shopping comparison engines to find the lowest prices for products across a wide range of product categories.