Scoring with Super Bowl Advertising: Why Google’s “Parisian Love” Was One of 2010’s Best Ads

Scoring with Super Bowl Advertising: Why Google’s “Parisian Love” Was One of 2010’s Best Ads

With the 2011 Super Bowl just around the corner, we thought now would be a good time to take a step back and think about what actually makes a Super Bowl ad – or any ad for that matter – successful.

Super Bowl ads are known as the pinnacle of creativity and entertainment in advertising. Given their vast reach among an audience eager to see and hear what advertisers have to say, the Super Bowl provides a unique and valuable opportunity for marketers, something certainly reflected in the cost of advertising slots (a 30-second slot this year will cost about $3 million). These high-cost spots mean high stakes for advertisers, making it essential that they deliver a strong, compelling and memorable ad. To take full advantage of the opportunity the Super Bowl presents, marketers must do more than just ensure their advertising gets a few laughs from the audience. After all, truly breakthrough creative does more than entertain – it informs, elicits feelings and influences thoughts in a way that connects a message to the brand. This connection is what ultimately drives long term branding and increased sales for the advertised product or service.

While there are many paths to great creative, years of research on the drivers of strong advertising have enabled Comscore ARS to identify a battery of content elements – such as the inclusion of brand differentiating key messages, demonstration of product/service convenience and claims of superiority – that have been proven to have a strong relationship to in-market sales outcomes. Using these insights, Comscore ARS has created a tool that combines and weights these creative elements to produce a technical score, which essentially quantifies the extent to which an ad includes the right mix of elements necessary to increase the likelihood of driving sales. Our clients use this tool as a quick and simple pre-launch assessment of an ad’s overall quality or to rank a variety of ads to help them decide which they should use and when. On the post-campaign side of the equation, they also use it to understand at a high-level why the ad might not have performed as well as planned.

For the purposes of this analysis, we used the tool to evaluate one of the most talked about ads from the 2010 Super Bowl: Google’s “Parisian Love”. This ad was coded for the presence of the relevant content elements and then assigned a technical score. It received a score of 51, which places it among the top quintile of ads we’ve observed over the years.

So what does this score actually mean? Simply put, the higher the score, the higher the likelihood for that ad to drive increased brand sales. And, as a point of reference, based on a Comscore ARS benchmark, a score of 30 or higher indicates an average to above-average ad where anything with a less than 30 score is considered below average. Below is the historical breakdown of how more than 8,000 ads we’ve tested over the years have scored against these benchmarks. 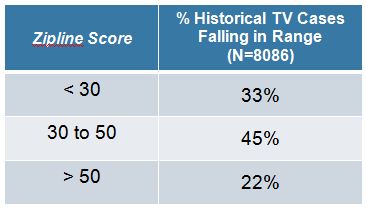 To understand why Google’s tug-at-your-heart-strings ad was almost universally lauded as an evocative ad that layered up to higher level benefits of the world’s most popular search engine, let’s dive into a little deeper analysis…

The score for “Parisian Love” benefitted from the existence of several elements – or key ingredients – traditionally predictive of advertising effectiveness. One such element was the effective use of music to convey mood and emotion. Another effective element was the demonstration of product convenience (i.e. the use of the search engine shown throughout the 60-second spot). But perhaps the most significant reason behind this ad’s strong score was the existence of certain structural elements, including the prominence and heavy use of the Google logo, and the prominence and demonstration of the actual product. As a result, it is unmistakable to the viewer that the benefits conveyed in the ad are linked to Google search.

From a strategic standpoint, “Parisian Love” also appears to hit the mark. Google is already a clear leader in the search market and is a tool that the vast majority of the American public uses on a daily basis. It therefore makes sense that Google might want to communicate higher order emotional benefits rather than communicate the functional benefits of search, with which everyone is already familiar. This ad effectively communicates how essential a role search plays in helping people make the important decisions in their lives, which ladders up to the emotional benefit of enjoying life and positions Google as a trusted advisor and friend. This ad also serves as an effective defense against Bing’s competitive positioning as a “decision engine” by showing how Google enables and facilitates consequential life decisions. And perhaps most importantly, this ad did an exceptional job of connecting the message back to the brand, so that people weren’t left saying afterwards: “I loved that commercial with the search results. Who was that for again?”

Effective ads don’t just entertain, they link the benefits to the brand. For the 2010 Super Bowl, it’s clear that Google got the message. Now it’s time to see which brands will experience the same Super Bowl advertising success in 2011…