Tuesday, April 22 was Earth Day. The celebration that started in 1970 has evolved significantly from its early grassroots beginnings into a day when cities, schools and increasingly more corporations promote environmental consciousness, as well as their own reputations, within communities and among consumers. The going green phenomenon has continued to gain momentum in recent years prompted by increasing media attention on environmental and energy concerns, mainstreaming of green products from food to clothes to cars, and celebrity endorsements to supply the very important trendy factor (think Hybrids at the Oscars and Live Earth).

As buzz continues to grow around the green movement, the Internet has become a place for the growing environmentally-conscious population to congregate as well as a place for newcomers to find information on the barrage of green products, terms and tips infiltrating the market place and daily conversation.

TreeHugger.com, one of the more popular green sites, has seen visitation reach 515,000 people in March 2008, an 81% increase from March 2007. Freecycle.org, a site which connects people in communities to exchange items they no longer need or want for free, gained 15% from the previous year to 322,000 visitors in March 2008. 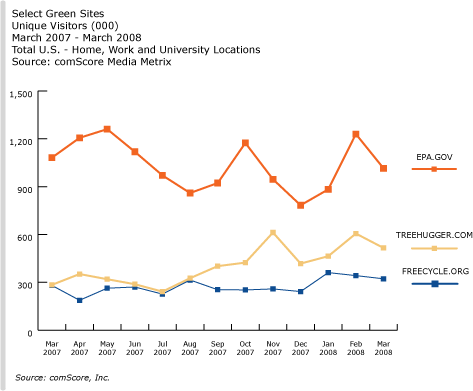 Beyond just niche environmental sites sprouting up and gaining popularity, search has also been vital to the growing green industry as people seek information about current environmental issues and how they can live greener lives.

I used Comscore Marketer, our search intelligence tool, to investigate several green search terms and came up with a number of interesting finding. Terms such as “ecotourism” and “climate change” have experienced large search query increases in the past year, with “ecotourism” growing 574% to 12,864 searches in February 2008 while “climate change” jumped 167% to 9,542 searches. Searches for “hybrid cars” also gained (up 48% to 68,332 searches), while basic environmental word searches have also seen growth, including “recycle” (up 35% to 72,779 searches) and “pollution” (up 58% to 32,788 searches).

Perhaps counter-intuitively, the top environmental search term — “global warming” — has seen its searches decline 54% decline in the past year, to 232,000 in February 2008. However, this decline should not be interpreted as a decrease in overall environmental interest, but rather as a natural decline from the term’s stratospheric popularity over the past couple of years surrounding interest in the Al Gore documentary An Inconvenient Truth and the release of the United Nations Intergovernmental Panel on Climate Change assessment report. (The first portion of the report was published in early February 2007 making it a particularly strong month for the term). As you can see, searches for the term were actually peaking around this time last year. 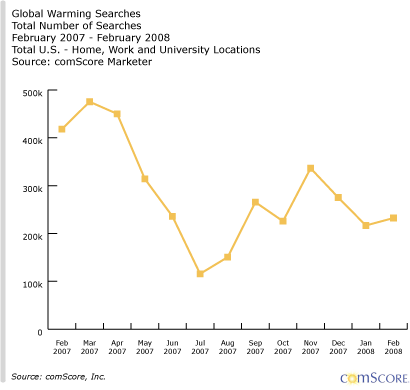 So even though we may be less likely to partake in an Earth Day rally today than in the 1970s, it’s clear that environmental activism is alive and well – it’s just that much of it has moved online. The accessibility of green communities and content on the Internet provides granola-lovers and non-recyclers alike with ways to be a little more earth-friendly, as well as a place for green marketers to reach and communicate with this growing niche audience.