As Olympic history was being made in various events over the course of the 2012 Summer Olympics in London, the world followed in real-time through television screens, online video streams, sports and news site updates, and social media commentary. Truly, the energy of the athletes participating in the London Games was matched only by energy of spectators around the world who tuned into various Olympic events across multiple devices, constantly seeking out the latest news and views on events and athletes. Now that the Games have come to an end, here is a look back on how the world fueled its desire for information on the Olympics through the lens of search traffic.

In the second blog post in this series, Small Screens for Big Games, we discussed how the emergence of smartphones and tablets as widely-adopted consumer technologies has had an influence on people’s consumption of sports content in their day-to-day lives. In June 2012, nearly 2 in 5 smartphone users in both the U.S. and UK reported using their phones to access sports information in the month. New data from Comscore TabLens shows that among tablet owners in the U.S., an even larger percentage – 46.4 percent – reported having consumed sports content on their tablets in the same month. 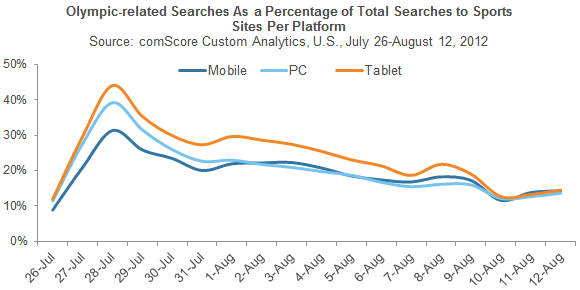 Despite having only gained popularity in recent years, tablets have already had a noteworthy impact on various consumer activities, with news and entertainment standing out as areas where tablets already see significant use. Evidenced by the sizeable share of Olympics-related searches made on tablets, it seems tablet owners turned to their devices more to seek information on the Games than did the general mobile and computer audience. With tablets lending themselves well to being used in tandem with TV or for viewing of real time video streams of Olympic events, it’s likely that heavy searching is the result of people simultaneously watching the Olympics and searching for related event or athlete information on their tablets.

Trending: The Olympic Search Leaderboard
Over the course of the Games, various stories of athletic feats – ranging from Michael Phelps’ breaking the Olympic record for total medals to Usain Bolt’s victorious finishes – dominated the airwaves. But what did the public really find interesting throughout the games?

In the U.S., basketball, gymnastics, soccer, swimming, and track and field garnered the most PC searches over the course of the Games, buoyed by the successful performances of American athletes in these fields. Gymnastics, in particular, received the greatest number of searches out of all the Olympic sports on the days of the team finals and individual all-around rounds as the U.S. Women’s Team struck gold, outpacing even interest in the strong performances of swimmers Michael Phelps, Ryan Lochte, and Missy Franklin.

In contrast, British spectators found basketball, boxing, cycling, soccer, and tennis to be the most compelling, with tennis seeing a surge in searches on the day of the tennis final won by Andy Murray. Searches for soccer-related news maintained a steady constant pace throughout, peaking during the semifinal matches, with cycling following a similar trend, showing upticks following the wins of cyclists Elizabeth Armitstead, Bradley Wiggins and Victoria Pendleton.

Athletes who attracted the public’s attention in both countries stood out for both their athletic prowess and accomplishments and, in some cases, for interesting moments captured during the Games. In the U.S., Michael Phelps drew the most searches among American Olympians, outpacing the second most-searched athlete by more than a factor of 2. McKayla Maroney’s famous scowl, captured after her second-place finish at her best event and immortalized with the Tumblr meme “McKayla is not impressed,” propelled her into the second spot for searches, followed by all-around winner Gabby Douglas. In the UK, track and field athlete Jessica Ennis drew the greatest number of searches among British Olympians during the games, boosted by her gold medal win in the heptathlon. Andy Murray and Bradley Wiggins ranked second and third in terms of searches.

Wrapping Up the Olympic Search Story
These search-driven insights help paint a picture of what the future of sporting events could look like, as audiences become increasingly savvy regarding following events in real-time through multiple devices. Ultimately, what the Olympic search story across multiple platforms tells us is that spectators of sporting events are no longer just looking to a single screen for information – and that perhaps even more than mobile phones, tablets are emerging as a valued source of news and video viewing for big gaming events such as the Olympics.

What does this mean for sports in the digital age? No longer are spectators limited to simply catching events as they appear on television; today, people can follow contests live and get results on their computer screens, tablets, even on their mobile devices. With an increasingly social cross-media environment emerging, people have more options than ever to follow the sporting events that they care about, however they want to. As the 2012 Olympics have shown, we are ushering in an era of greater participation for spectators – one that will surely grow as people the world over increasingly integrate their consumption of media across multiple platforms into their day-to-day lives.

This post was co-authored with Mengxi Lu.
The blog is part of our Comscore at the Games series