Now that the 2007 holiday shopping season has finally come to a close, it’s worth taking a look back at what transpired. Depending on how you look at it, there’s a strong argument to be made that the glass was both half-full and half-empty.

The optimist will look at the fact that online holiday spending during the months of November and December came in at more than $29 billion, representing a 19% gain versus 2006. Certainly it would be very difficult for anyone to complain about that level of growth, especially when considering that Comscore’s forecast made at the beginning of the season was for a 20% growth rate.

However, when you look at the 19% growth rate in relation to previous years for online holiday retail, the picture isn’t quite as rosy. Each of the prior 4 years has seen holiday spending increase between 24%-30%, with last year’s growth rate a robust 26%. Clearly 2007 marked a substantial drop-off compared to prior years, despite the fact that 19% is still a very healthy growth rate.

So what caused this nearly 7 percentage point decline versus 2006? We believe there might be three primary factors.

The first factor is that the economic uncertainty in the U.S. (i.e. declining house prices, rising gas prices, a jittery stock market, etc.) had a clear negative impact on consumer behavior this holiday season, and online retail was certainly not immune from these effects. In fact, when we examined the differences in spending growth among different income segments, the results were stark: 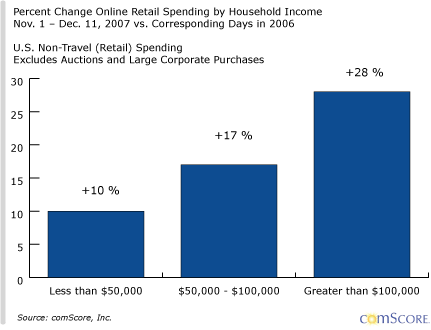 The second factor is that the total seasonal growth rate was dampened by a particularly soft start to the season. Unseasonably warm weather in early November saw sales of apparel & accessories – one of the largest online retail categories – really flat, leading to a very low growth rate to start the season, from which it never fully recovered. (I should note that the period between Thanksgiving and Christmas did see 21% growth – a solid number in its own right) A look at the cumulative growth rate shows how the early season softness prevented us from ever breaking through the 20% threshold during the season. 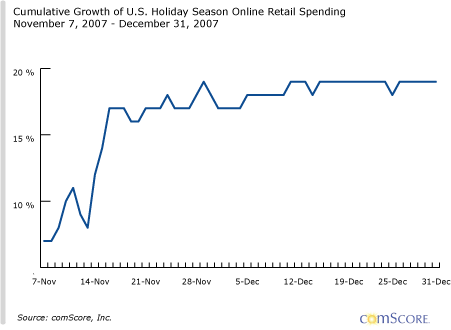 The third factor is that – as with most aggressively growing markets – very high growth rates are difficult to sustain as the base gets bigger. (Even Google isn’t growing its revenues over 100% annually like it was a few years ago, but you’d be hard-pressed to find an analyst that would tell you that Google’s momentum has slowed.)

So what’s the outlook for online retail this year? Based on what happened in 2007, it’s likely to depend on the economic realities that present themselves in 2008. An AP Poll in late December found a 26% gain in credit card delinquencies. While this segment only represented 4% of the total outstanding debt, it’s clear that these consumers – with maxed out credit cards and likely no home equity to borrow against – will have virtually no recourse but to curtail spending. But, I think the bigger concern raised by this AP research is that it does suggest that consumers may be increasing their level of debt to maintain their spending power, which clearly doesn’t bode well for the consumer economy in 2008.