It’s not often that a new genre emerges within an established type of entertainment.

In the gaming space, however, the Battle Royale category (a last-man-standing survival game) recently skyrocketed to prominence – most notably via the rapid ascension of Epic Games’ Fortnite, which has arguably become a recognized household brand.

The premise of Battle Royale games is simple. Players (or teams) parachute into a remote island aiming to survive and outlast all other competitors. Matches last anywhere from a few seconds to twenty minutes, depending on several factors. Variety and randomness are key attributes, and often lead to comical and “streamable” moments, as players run around searching for key items while trying to outlast each other. As the matches progress, a storm or poison cloud slowly shrinks the map, forcing players to confront each other in a smaller and smaller battlefield, until one team or player emerges victorious.

The Battle Royale genre has become a huge hit that appeals to a variety of gamers. In fact, according to Comscore’s recent  State of Gaming report:

Much of this broad popularity can be attributed to the low barriers for entry. Since games are short and gameplay is straightforward to learn, casual gamers can play quickly on any device, while dedicated hardcore players and streamers can spend hours mastering the mechanics and strategies over time.

Fortnite’s Ascension
They say imitation is the best form of flattery, but that’s small solace for games like PlayerUnknown’s Battlegrounds (commonly known as PUBG), which is commonly credited as a trailblazer in the genre. When PUBG arrived on PC in 2017, it quickly set the tone for Battle Royale games.

Other Battle Royale games – and games with “Battle Royale” modes – continued to spawn, as game studios sought to capitalize on the fervor. Fortnite, however, quickly eclipsed anything previously seen in the Battle Royale space, becoming the banner carrier for the entire genre. Offering an arcade game style, unique mechanics such as on-the-fly building of structures and other oddities, the game attracted a massive following. In July of this year, the first ever World Cup champion of Fortnite was crowned, with the 16-year-old winner taking home a $3 million prize. Fortnite has risen so high, in fact, that publisher Epic Games announced in March it had nearly 250 million registered players (across all platforms). For context, this player base doubled in less than one year, as Epic reported 125 million players in June 2018.

The game has even permeated into society beyond the gaming world. “Fortnite dances,” the stylized victory moves players’ avatars enact after a match, have become recognizable to casual and dedicated gamers alike, with NFL stars even integrating the dances into touchdown celebrations.

With all this attention (and money) pouring into Battle Royale, other developers have continued to seek their own piece of that pie. In early 2019, Electronic Arts (EA) released Apex Legends, a game rumored to be the “Fortnite Killer.” Apex Legends seemed to have all the necessary Battle Royale components and was even live-streamed by Ninja, Fornite’s biggest streamer. In a genre that had already seen rapid shifts of players from PUBG to Fortnite, it was fair to wonder if the newest player at the table would have a similar effect on the Battle Royale world.

Comscore’s console data, however, shows that Fortnite didn’t take as big of a hit as EA might have hoped. 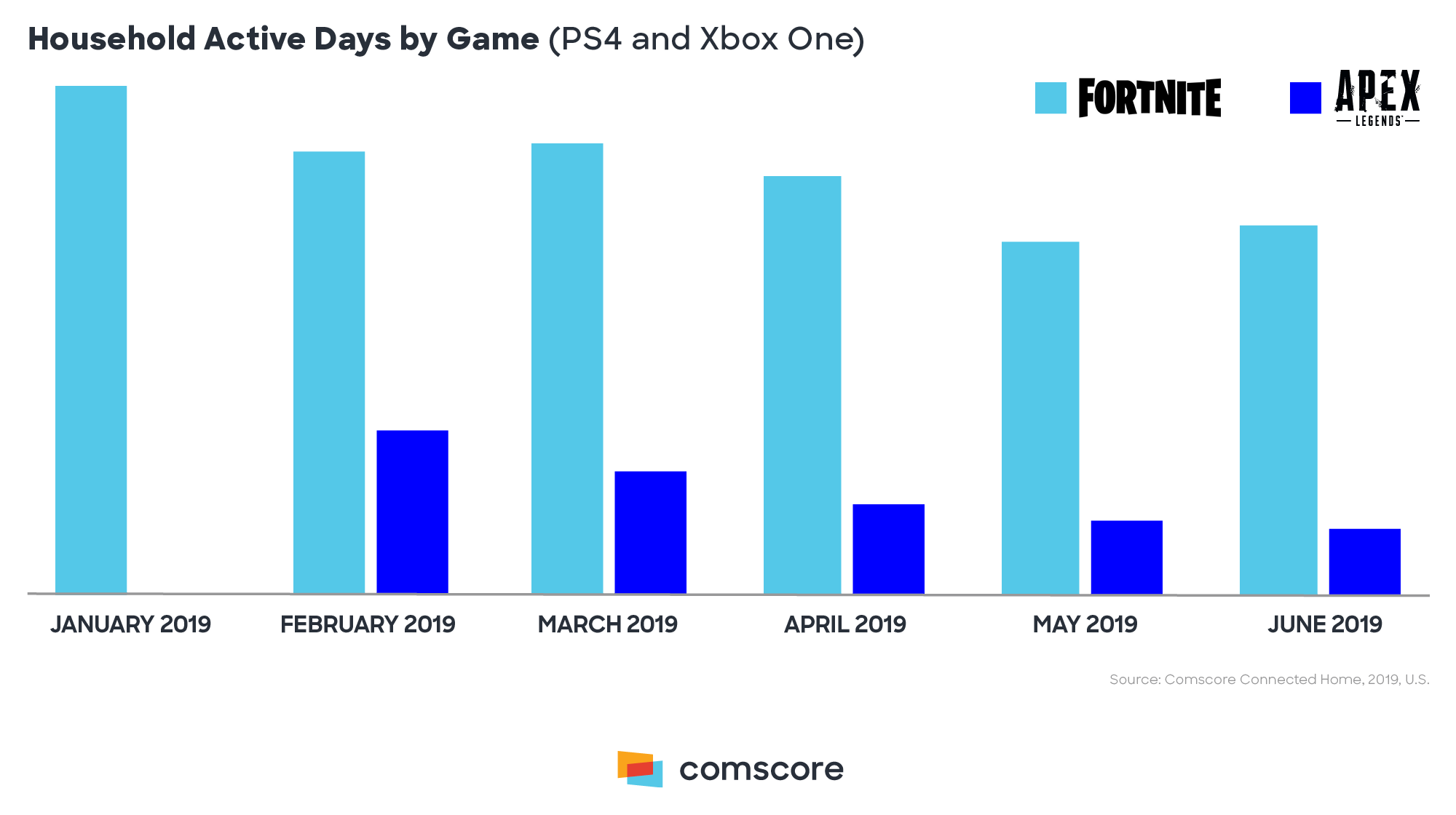 Gaming activity data from Comscore’s Total Home Panel reveals that Fortnite’s dominance has only tapered off ever so slightly since Apex Legends entered the market, as shown above. In fact, since being introduced, interest in Apex Legends has begun to wane – and even during its peak, it had nowhere near Fortnite’s activity.

Importance of Battle Royale to Streaming
Battle Royale is an important genre in the current gaming world not just for the gameplay itself, but for the community these games can help to create through live streaming. Twitch and other streaming services have exploded in the past few years, and while any game can theoretically be streamed, certain types of games lend themselves to a massive following much more quickly. Battle Royale games are one of those. With easy-to-grasp mechanics and short games, you don’t need to pore over skill trees, build orders or card lists to understand what’s happening in the game. Plus, the frenetic nature of Battle Royale games gives rise to the aforementioned “streamable moments.”

Our Comscore State of Gaming data show that those who are playing Battle Royale are even more engaged in live streaming and other similar activities than other gamers, making them an interesting gaming demographic for publishers (both site and game) to capture and engage.

While the genres of action and first-person shooters (FPS) are also quite popular in the streaming world, those who play Battle Royale games as well showed a significantly higher affinity for these types of engagements. 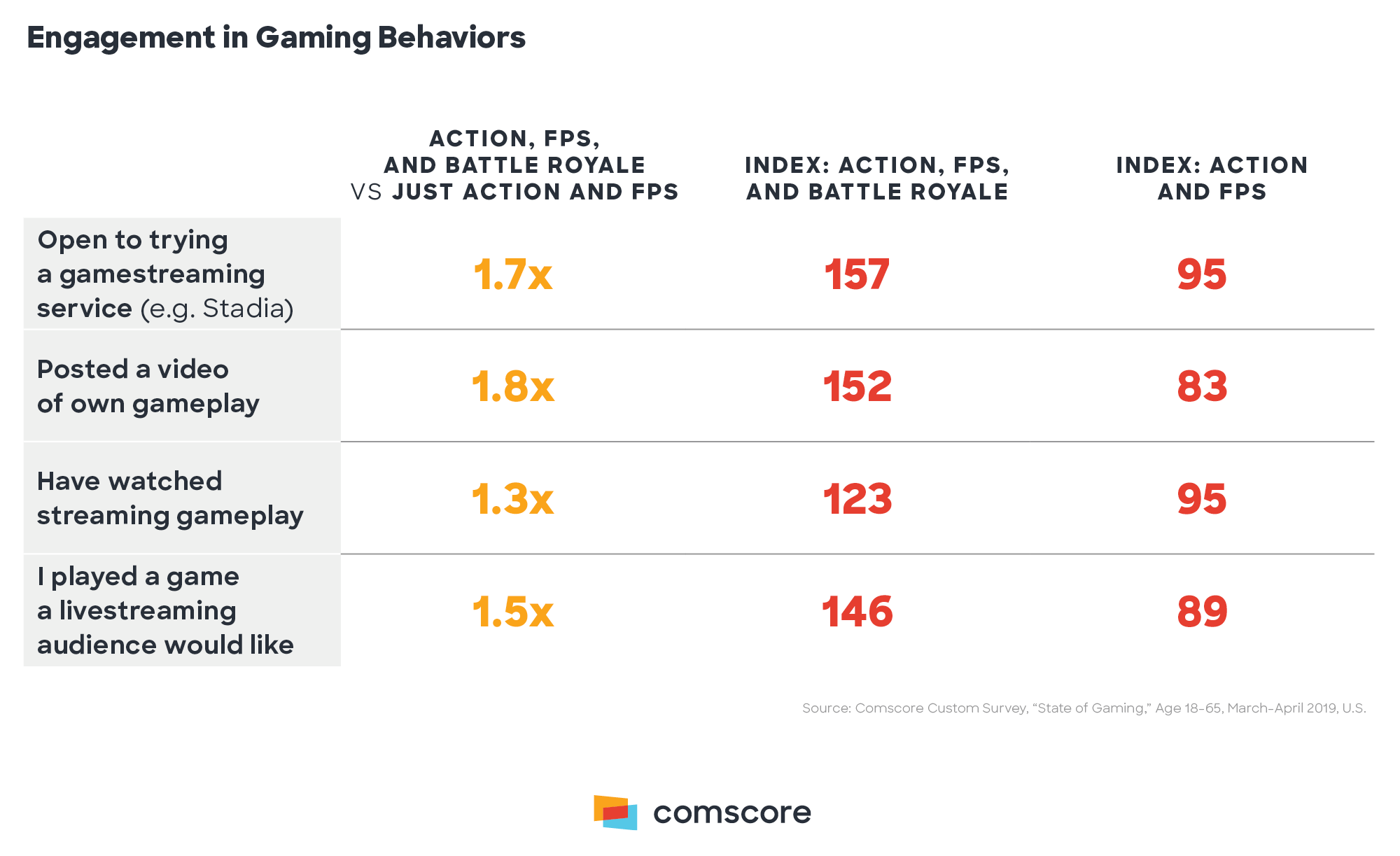 Those who played Battle Royale games in addition to action or first-person shooter were nearly twice as likely to have posted a video of their own gameplay on a streaming site, and while 36 percent of action/FPS players have watched streaming video recently, a full 66 percent of those who play all three genres (action/FPS/BR) have done the same. Across the board, our data showed that these “trio” gamers (all three genres) were much more engaged in the community and streaming aspects of gaming than those “only” playing action and FPS.

Battle Royale’s Future
As the genre continues to evolve, we will likely see streaming platforms and gaming companies test out new ways to monetize their content and audiences. Fortnite has dominated for several years now, but there are certainly legitimate questions about the future of the genre. While the easy pickup nature of Battle Royale games has been a huge strength of the genre’s growth, it could also be a weakness for longevity as critics have pointed out it lacks depth; at a basic level, every game is “the same.” You spawn, you eliminate other players or get eliminated, you do it again. Is that enough to keep players coming back over the long haul, or will they eventually tire of this gaming mode and move to something else? Not only do Epic and other developers need to constantly stay one step ahead with innovative gameplay and features to keep players engaged, but publishers and brands seeking their own part of the Battle Royale world will also have to stay plugged-in to the latest trends.

To learn more about how Comscore can help with gaming industry insights, please contact us.

Entertainment in 2022: The behavioral trends in the U.S. that are...