In August, Groupon surged ahead with its 11th straight month of gains to reach 6.5 million U.S. unique visitors, capturing the title of the web’s most visited coupon site. To look at Groupon’s current growth curve shows a site whose audience is expanding exponentially, up 1,000% in just the past year. And these numbers don’t even account for Groupon subscribers who receive the daily email offer but don’t respond by visiting the site over the course of the month. 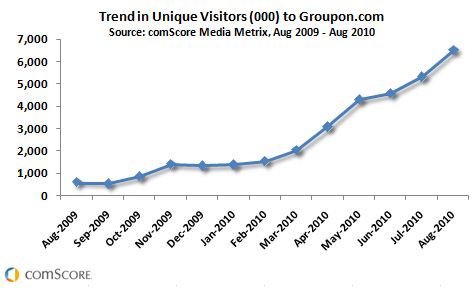 Groupon has clearly emerged in the online coupons sector in a major way, bringing even more innovation into this category. Online coupons had been growing their audience strongly over the past two years due to the impact of the recession (and consumers’ resulting need to save money wherever they can) and the new coupon services that offer consumers the ability to redeem “paperless” coupons at retail that are tied electronically into their loyalty cards. But given how many well established sites there were in the category, it is a pretty remarkable accomplishment to grab the #1 position in just a few years, pulling ahead of longtime category leader Coupons.com. Other top sites in the category include RetailMeNot.com (4.6 million visitors) and Eversave.com (3 million visitors). (Note: Groupon competitor LivingSocial, which Comscore does not technically include in the Coupons category, attracted 3.7 million visitors in August.) 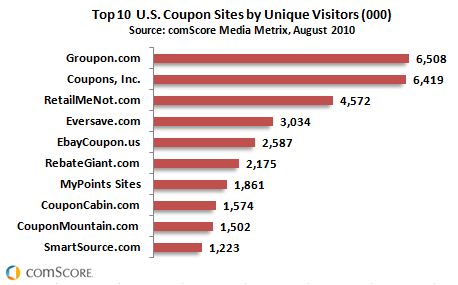 I think Groupon’s success thus far can be attributed to the fact that it created a market for transactions to occur between consumers and local businesses that did not previously exist in a digital, print or mail delivery format. Because consumers like to try new things (and receive discounts) and local businesses love to get new customers (but struggle with upfront costs without a “guarantee” that they will be able to expand their base of consumers) there was a market need for an online service that would facilitate these transactions. The closest approximation of this service in the print world would be coupon mailers, but they require payment upfront for the cost of distribution and they lack digital’s social, collective buying format that seems to make the consumer experience more engaging. There is perhaps also a perceived aura of exclusivity in receiving daily deals that consumers find compelling.

Ultimately, without an efficient digital marketplace for these transactions to occur in high volume, local businesses were left to spend a lot of marketing and advertising dollars just to get the offer in front of consumers. These are budgets that local businesses don’t always have, especially when there is a very real risk that the marketing effort doesn’t pay off. With Groupon, businesses don’t pay for the distribution of the offer. They only pay if the offer is redeemed. This virtually guarantees that a business is paying for some new customers to come through the door. (Sure, it may also attract some existing customers who may have already been willing to pay full price, but I think that is part of the built-in cost of attracting new customers.) Another brilliant aspect of the Groupon business model is that Groupon receives payment upfront for the purchase directly from the consumer and receives a “piece of the action,” i.e. a portion of the discount offered. In traditional coupon models, the distributor of the coupon gets paid by the business customer for the distribution effort but receives no part the discount.

One of the questions I’m asked most often about Groupon is whether or not it’s just another fad. The short answer is: no, I don’t think that’s the case. Fads are usually dependent on a temporary shift in consumer tastes and preferences, while legitimate long term trends occur when new models take root and consumers adopt and see value in that model. I think the latter is the clear case with Groupon.

And despite its fairly impressive ascent in a short period of time, there remains ample opportunity for continued growth. As Groupon establishes a presence across most local markets around the U.S., it still has significant room for continued penetration of existing markets. Consider that in a given month, just 3.1% of the U.S. Internet population visited Groupon.com. That still adds up to a lot of people – 6.5 million to be exact – but it also means that the other 97% are still potential customers. 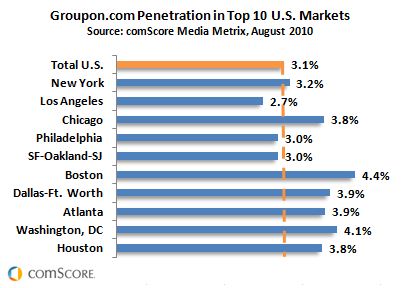 Most web companies are more or less limited to growth within their target market, which means that even if they do an excellent job of penetrating that market, there is a natural saturation point. However, Groupon’s appeal spans age and gender, indicating that it has a lot of upside before reaching that point. For that reason, Groupon appears poised to continue to grow its customer base, though it should also be noted that dozens of new competitors (BuyWithMe, DealOn, Gilt City, Tippr, HomeRun, just to name a few) are swarming into the market every day trying to claim a piece of the pie.

Only time will tell how this market develops, and it will be an interesting market to watch. But clearly Groupon has tapped into a new behavior to which consumers are responding in a powerful way. And it’s great to see continued innovation happening in the online world.