How African American and Caucasian Millennials Are Affected by Targeted Advertising

How African American and Caucasian Millennials Are Affected by Targeted Advertising

Comscore recently released a report titled Next-Generation Strategies for Advertising to Millennials highlighting results from a study of the unique characteristics of this generation and how to effectively market to them across media. Figure 1 illustrates how trends of advertising effectiveness among differing age groups have stayed consistent over the last 50 years, with older audiences tending to generate higher lifts in Share of Choice (Comscore’s advertising effectiveness metric) compared to younger audiences – Millennials being no exception as illustrated by the 2011 study. 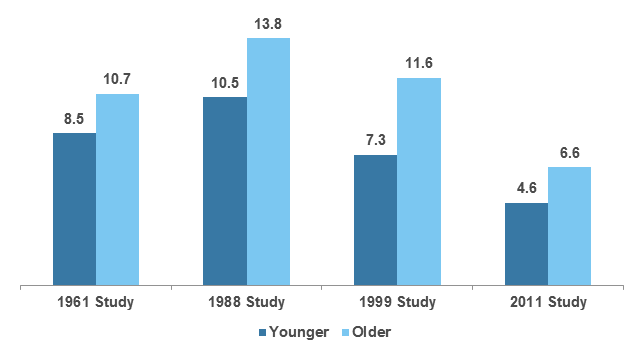 Figure 1: Average Lift in Share of Choice among Older versus Younger Groups

At the core of the Comscore report is the concept of targeted advertising, which enables marketers to more effectively reach a specific audience and address its unique needs rather than attempt to win over all segments of the population with one general message. Advertisers are recognizing the advantages of dividing consumer markets in an effort to increase share among specific, more valued segments deemed to be prime targets for their products.

The degree to which population segments are targeted tends to vary across advertisers. African Americans, for example, are a group targeted by marketing heavyweights Procter & Gamble and McDonald’s, who spend nearly $90 million and $38 million, respectively, advertising to them in one year alone1. These examples are not typical, however, as the majority of marketers don’t target advertising to African Americans. In fact, of the $263.7 billion spent annually on advertising within the U.S., less than one percent targets African American consumers2 . Why is this important? African American buying power is currently at an all-time high and is forecasted to exceed 1 trillion dollars by 20123 , and there is an increasing amount of research demonstrating that African American audiences react positively to African American-targeted messages (Appiah, 2004). Thus, targeting this segment can be valuable for marketers. 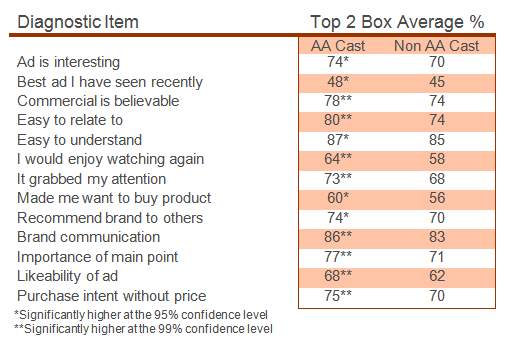 Although a relationship can be observed between the response to advertising by an African American audience and the ethnicity of the cast, perhaps there is yet another layer of differentiation that should be taken into consideration. Some research suggests that factors in addition to using relevant images (i.e., cast ethnicity) -- such as the audience’s identification with its own ethnicity -- can also affect the extent to which an ad is received positively (Green, 1999). In other words, some research proposes that African Americans’ response to African American-targeted advertising is mediated by their level of ethnic identification. For example, a study revealed that African Americans with strong ethnic identities responded more favorably to African American-targeted media compared to media that was targeted to Caucasians. Conversely, African Americans with weaker ethnic identities displayed no difference in responses between the two types of media (Appiah 2004). While these findings contribute critical knowledge to the field of marketing research, it involves a construct (i.e., ethnic identity) that isn’t easily or efficiently accessible to marketers in the creative development stage of targeted advertising.

Similarly, another point of view contends that contrasting age groups experience and interpret their environment differently based on the state of societal norms. This may especially be true in the case of African Americans due to the dramatic shifts in civil rights that have occurred in the last century. Is it possible that an individual’s identification with his/her ethnicity is largely dictated by age, and this in turn dictates his/her cultural lens?

Ellis Cose might agree. In a recent book (titled The End of Anger: A New Generation’s Take on Race and Rage) Cose discussed various segments of African Americans that were a direct result from his research on age groups. The oldest group experienced much of the horrors of life during the times of segregation, the civil rights movement, and other racial struggles endured near the middle of the 20th century. While the following generation wasn’t directly involved with the civil rights movement, they were the first group of African Americans to break down walls of segregation at many institutions (e.g., universities, corporations, etc.). Finally, the youngest group termed “Believers” by Cose and roughly analogous to the Millennial generation, is a segment of African Americans who were raised in a world where explicit demonstrations of racism were condemned. This group, according to Cose, is likely to believe that racist barriers no longer apply and that no group is limited based on skin color.

Another Comscore study used the Comscore Share of Choice metric to determine ad effectiveness. Ads were separated into two groups: those with an African American cast, and those without an African American cast. Next, respondents were categorized into three age groups similar to those discussed by Cose — the youngest being the Millennial generation (age 16-29 years) and the oldest we term Seniors (age 50+ years). Finally, respondents were split into groups according to their ethnicity, focusing on African Americans and Caucasians only. 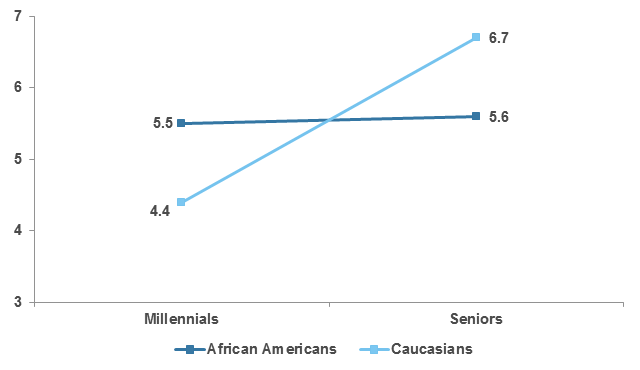 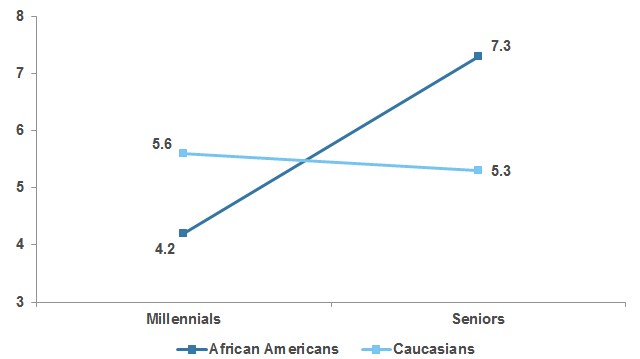 The findings for older Caucasians essentially mirror African American results. This suggests the presence of strong ethnic self-identification among older Caucasians and possibly lingering biased tendencies among some in this generation.

Interestingly, one could argue the trends are extremely similar to those revealed by Appiah (2004) if the age variable in the current study was used to represent ethnic identification level. Perhaps future research should examine the relationship between age and ethnic identification which may shed light on how the younger generation is altering societal views on race.