Many of you may remember playing the educational game “Where in the World is Carmen Sandiego?” growing up. The game had a simple premise where you were chasing the main villain, Carmen Sandiego, and her henchman around the world, and only your knowledge of geography could enable their capture. If you correctly interpreted the clues, you were rewarded with a captive and the continuation of the chase. But if you made a mistake, you were penalized; forced to backtrack to your last known location and start anew. Nothing could be more infuriating for a school kid that prided himself on his smarts

Apple’s recent foray into the maps market, in which they scrapped Google Maps from the iPhone 5 in favor of Apple’s own maps offering (which hadn’t worked through all the kinks) reminded me of that game and how unhappy I was when I got my geography answers wrong. That quest to search – and find – something elusive was foiled by an incorrect answer. The general public also voiced their displeasure, leading to an eventual mea culpa by Apple CEO Tim Cook. This scenario highlights just how important mapping, and more importantly, accurate mapping, has become to all of us.

Although we have had excellent desktop-based mapping services for sometime, the rise of smartphones has created a major shift in how and when consumers rely on these applications.

Desktop-Based Mapping vs. Mobile-Based Mapping
Visitation to Maps websites on desktop computers has been very consistent for a few years now, holding steady at between 95-100 million unique visitors during any given month, representing more than 40% of the U.S. online population, according to Comscore Media Metrix. A sizable population of users, no doubt, but clearly not a category such as News or Social Networking, which reach more than 80% of the population.

It would appear, however, that maps on mobile devices have become a much greater necessity. In the past six months alone, according to Comscore Mobile Metrix, the number of smartphone visitors to Maps websites and apps has jumped 24% to 92 million unique visitors – a monthly penetration of 83% among smartphone users. When you consider that more than 50% of all new handset purchases are smartphones (source: Comscore MobiLens), there is still plenty of room for this market to continue its rapid expansion.

And as that shift occurs, there is emerging evidence showing that it is coming at the expense of desktop mapping.

Map Desktop Search Signals Platform Shift
One way we have seen this platform shift manifest is through search behavior online. Searches with a Mapping/Navigation intent on the Big 5 Engines are down 34% over the past 15 months, going from 74.8 million to 49.5 million in August. Comscore Search Planner shows that search clicks to Map/Navigation sites show an even steeper decline, down 41% to just 55.2 million in August. 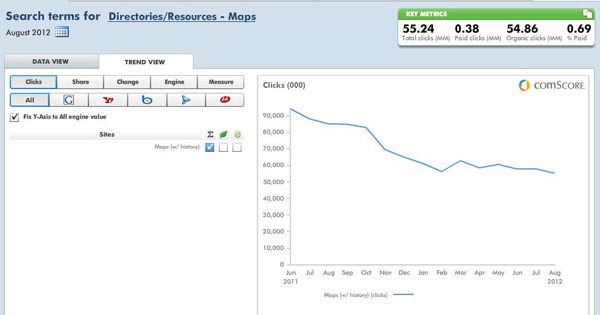 As desktop-based searches with mapping intent and search clicks to map websites both show declines, it’s clear that search as a discovery process for navigation on desktops is eroding. This trend signals a significant shift in intent, as consumers who once relied on being at a computer to search for directions before going somewhere are now happy to rely on those handy little computers in their pockets.

The Future of Location-Based Search Monetization
So while the top-line visitation numbers may remain strong on desktop computers, don’t let it fool you from thinking that this shift isn’t happening. Consumers are increasingly integrating mapping into their mobile lives and that behavior will only increase as location-based technology develops further. Apple’s first foray into maps may have been a temporary setback, but more competition in this market will only bring better technology and improved navigation services over time – and those advancements will continue to pull these searches away from desktop.

But there is opportunity for greater search monetization in the long run, because location-enabled search means the ability to deliver highly relevant paid results to potential customers in the vicinity or planning a trip to the area. And whichever mapping service delivers the best user experience is sure to receive the greatest spoils.