Optimise Toward ‘Golden Impressions’ to Put Trust Back Into Digital Advertising

Optimise Toward ‘Golden Impressions’ to Put Trust Back Into Digital Advertising

The issues of viewability, brand safety and invalid traffic, particularly non-human traffic, have increasingly given rise to negative connotations for our industry. These combined have slowly dripped away at the underlying faith in the digital ecosystem. It’s been a bitter pill for the industry to swallow – that many of the advances in reducing waste and increasing efficiencies, particularly those that have come with advances in programmatic trading, have brought with them an unwanted side effect in the creation of an environment where nefarious activities can hide; often overshadowing the positive benefits that programmatic trading has brought to our industry.

Ultimately, it has been the lack of clarity in where advertising actually is served that is feeding this growing lack of trust. So how can we instill widespread trust back into the ecosystem and change the conversation from one of negative connotation to one focused on the positives that digital advancements have brought?

The key to instilling trust is through optimising and undertaking attribution towards what I’ll call ‘golden impressions.’ Verification vendors that do offer sophisticated fraud detection serve to isolate the ‘verified impressions’ that stand a chance to be seen, by human eyes, and in environments that are not harmful to the brand in question. Ultimately, by employing this sophisticated detection, campaign effectiveness can dramatically increase.

Sophisticated Verification is Essential
There are numerous point vendors that currently attempt to tackle issues such as brand safety, viewability and invalid traffic in turn. However, what is becoming increasingly obvious is that dealing with each of these subjects in isolation can create as many issues as it solves.

Take the below example, which illustrates how viewability and NHT are inextricably linked. The difference in results can be dramatic when we are not looking at the complete picture of verification.

In order to identify the inventory that is actually ‘doing the work’ – and on track to result in ‘golden impressions’ – verification has to combine all aspects at the same time, including invalid traffic, viewability, brand safety and target audience. Only this gives us real transparency into the quality inventory within any given media campaign.

Verification Must Eradicate Invalid Traffic
Although technology has advanced, the foundation of advertising still remains the same: to elicit feelings, emotions, perceptions and actions that ultimately increase sales and build brand loyalty. But if you are not reaching a human, no matter how great your targeting or creative is, your advertising will never have the chance to work.

Fraud is intelligent and, by its nature, is designed to mimic human activity. It is therefore easy to mistake it for the most attractive inventory out there, which then logically means it’s all too easy to actively target.

Given this, the center of the verification promise has to be the identification and eradication of invalid traffic and other kinds of fraudulent activity.

Campaign Performance Metrics are Only Accurate When Invalid Traffic is Removed
Without the most sophisticated fraud detection happening BEFORE metrics such as viewability or in-target audience are calculated, the usage of verification services can serve to further eradicate trust among the digital advertising marketplace.

The truth is that there are tools that do offer this sophisticated level of fraud detection, yet they tend to paint a painful picture that is all too easy for advertisers to ignore.

Faced with the directive of increasing viewability, it is tempting to choose a vendor that gives you the highest possible viewability rate because they have not removed fraud before calculating the view rate. In many instances, following this path can very quickly lead to increased CPAs, which has only served to further confuse the market.

Further, neglecting to eradicate fraud then leads to real issues when looking at attribution. When trying to understand the audience and environments that lead to the success of a given campaign, tools that do not offer highly sophisticated fraud detection paint an inaccurate picture of what impressions are actually doing the work, which at best is misleading and at worst very harmful.

A Light at the End of the Tunnel
Verification vendors that do offer the most sophisticated fraud detection are, in fact, a blessing to the market. They have the tools that identify the traffic, sites and users that are making advertising actually work. They also serve to isolate the ‘verified impressions’ that stand a chance to be seen, by human eyes, and in environments that are not harmful to the brand in question.

Optimising and undertaking attribution towards these ‘golden impressions’ not only dramatically increases campaign effectiveness, but they are also the key to putting TRUST back into digital media.

To learn more about the impact of invalid and non-human traffic, download our report: 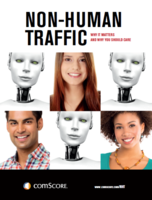 Innovating in the Virtual World