In case you missed it, Comscore recently released a report entitled The Digital Politico: 5 Ways Digital Media is Shaping the 2012 Presidential Election. The report analyzes key digital campaign elements that have impacted the primaries, with an eye to how these will affect the general election.

Among the key themes discussed in the report is social media. Social media’s ubiquity and rise in popularity in recent years have largely contributed to shaping a more social environment online – not just among friends, but also between brands and consumers as well as candidates and voters. Today, social media has become an integral part of the political media landscape, growing as a primary channel for campaigns to reach out to their constituents, provide open lines of communication, and weigh in on the issues of the day (when they can’t get on TV, of course).

Through social media, a wider group of voters have found a way of more actively engaging in political discussion, debates, and issue advocacy. Whereas people may once have gathered in small groups to share their political opinions, they are now able to do the same with a broader number of people online by simply writing a post and clicking a link to share these with friends. As a result, in addition to and in some cases in place of the political conversations that typically take place in small groups around office watercoolers, similar conversations now take place on people’s Facebook timelines and Twitter feeds, giving birth to the “digital watercooler.” The true power of the “digital watercooler,” however, is the ability to amplify these debates – which used to occur between a few people – to dozens or even hundreds of people in one’s social networks.

Beyond merely engaging a core base of supporters, however, campaigns have also found value in social media as a means for reaching a broader prospective audience. Although social media continues to evolve as an advertising channel, a Comscore analysis of both the Republican and Democratic social strategies to date demonstrates how and why it needs to be considered along with each of the other more established media channels. Like other mass media, social media has the ability to reach an audience and deliver an impression with the ability to persuade a voter’s opinion and compel them to act. What has not traditionally been understood is the scale at which social media can reach prospective audiences and how it may actually influence the behavior of those reached. The following data reveal how campaigns can capitalize on ‘earned’ media impressions through Facebook that can be similar in scale – and in some cases much larger – than the number of impressions delivered by their paid display ad campaigns. Earned impressions are defined as advertising messages people pass on to their friends and associates via social networks, functioning as bonus advertising providing additional exposures at no added cost. 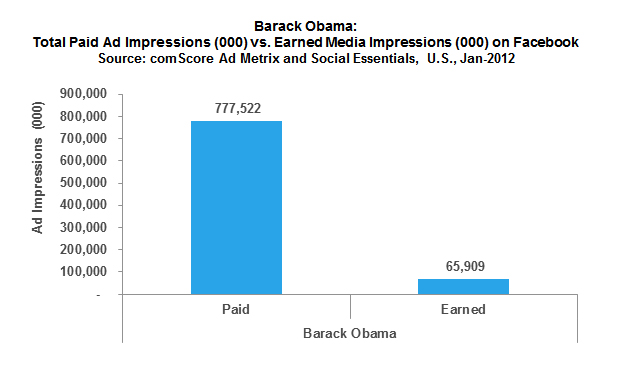 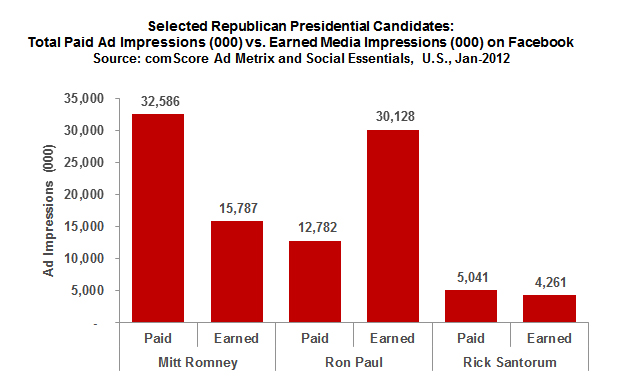 While the Obama campaign delivered nearly 800 million paid display ads in January – a significant number on its own – it leveraged Obama’s 25 million Facebook fans to deliver nearly 66 million additional earned impressions virally. On the Republican side, Ron Paul more than doubled his paid media presence with earned impressions, while Romney received half as many impressions and Santorum nearly matched his paid total. In other words, the Obama campaign generated more free advertising by fans spreading ad messages virally than the sum total of all the paid advertising of all the Republican candidates.

It is fair to say that on sheer volume of exposure, the Obama campaign is far outpacing Republicans in leveraging social media. On the other hand, if we look at the virality ratio (ratio of paid to earned impressions) Ron Paul clearly won that race by getting more than twice as many free exposures than the number he paid for. If one were to apply the average online display ad CPM (cost per thousand impressions) of $3, then the 30 million earned impressions received by the Ron Paul campaign were worth nearly $100,000 in advertising in one month. Because messages endorsed by friends can in some cases be more likely to persuade the thoughts and feelings of those exposed, the value of these viral impressions may be far greater than the initial estimate. The digital lesson there is that a compelling ad will indeed travel, amplifying the candidate’s message and value of the online dollars spent. It is well worth the time and effort for campaigns to understand the degree to which the message resonates with fans before running the campaign.

An analysis of the frequency of exposures across candidates is also insightful. On average, each paid exposure to a fan results in 0.68 of an exposure to a friend of that fan. This further demonstrates the unique capabilities of social media in engaging a broader mix of users. Gingrich ads stood out as an exception to the general pattern in that they managed to expose friends of fans more often than his actual fans. Even though Gingrich had a much smaller base of fans, this suggests those fans were passing those messages onto their friends at an unusually high rate of frequency. 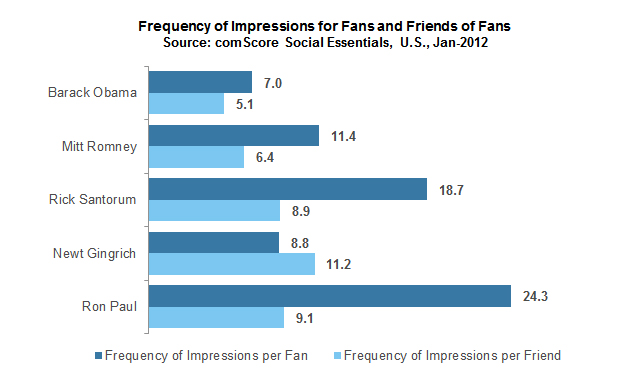 This illustration highlights how social media effectively serves as a channel for campaigns to generate a word-of-mouth effect among supporters, broadening the reach of their campaign messages at a fraction of what it would normally cost to do so on other platforms.

Another important component of a campaign’s social media presence is to understand which audiences they are reaching. One might assume that those who visit the campaign’s website or who become fans of a given candidate are likely to be engaged constituents and supporters. While that may certainly be the case, our data also suggest that these two groups may be very different audiences in reality. For example, 57 percent of visitors to BarackObama.com are age 45 and older, compared to just 22 percent of his Facebook fans. Overall, his social audience skews younger than the audience he reaches via his website. Mitt Romney, on the other hand, shows the opposite pattern. Although he has not yet amassed an audience that is anywhere near President Obama’s, the audience he is reaching through social means actually skews older than the audience that visits his website. 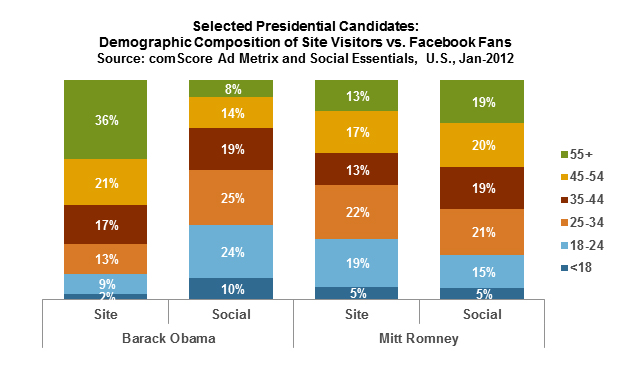 Such marked differences suggest that campaign operations must understand who their audience is for each media and design their strategies accordingly. As we conclude the primary portion of the 2012 election season and Mitt Romney assumes the role of the Republican nominee, we’ll be keeping an eye on both the Obama and Romney campaigns to see how they continue to leverage social media and what effect their social strategies will ultimately have on their campaigns.