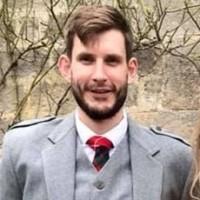 In last week’s blog post we saw that viewership peaks when a combination of sports hits the screens. So, in the UK, how different are TV viewers of different sports in terms of OTT content preferences? Let’s look at the example of Football and Rugby.

With a correlation of 0.95, Football fans preferences in terms of OTT programmes greatly overlaps Rugby fans preferences. (Chart below.) So rather than seeing differing groups of Football or Rugby fans, it appears that there is a more generic ‘sports’ fan that shares a lot of similar traits and therefore enjoys the same type of TV programming, regardless of which sport it is they are watching.

There were perhaps some slight stereotypes appearing within the types of programmes watched by the different fans. For example, Rugby has long had an association for being a traditional, ‘gentleman’s’ game, and watched by those with slightly more progressive and inclusive values, so we see a higher affinity for some political dramas and progressive shows such as ‘West Wing’ and ‘It’s a Sin’. In contrast Football (seen as a more ‘working’ class game) fans indexed higher on perhaps less thought provoking entertainment with Crime dramas, superhero/fantasy and sitcoms ranking highly compared to their Rugby counterparts (‘Power Book 2: Ghost’, ‘The Flash’, and ‘Fresh Prince of Bel-Air’). It’s important to note, however, that this doesn’t mean that football fans don’t watch progressive shows, as something like ‘It’s a Sin’ still has an affinity index of 2.14 for Football fans, it’s just that there is a lower affinity for the show than Rugby fans have for the show. 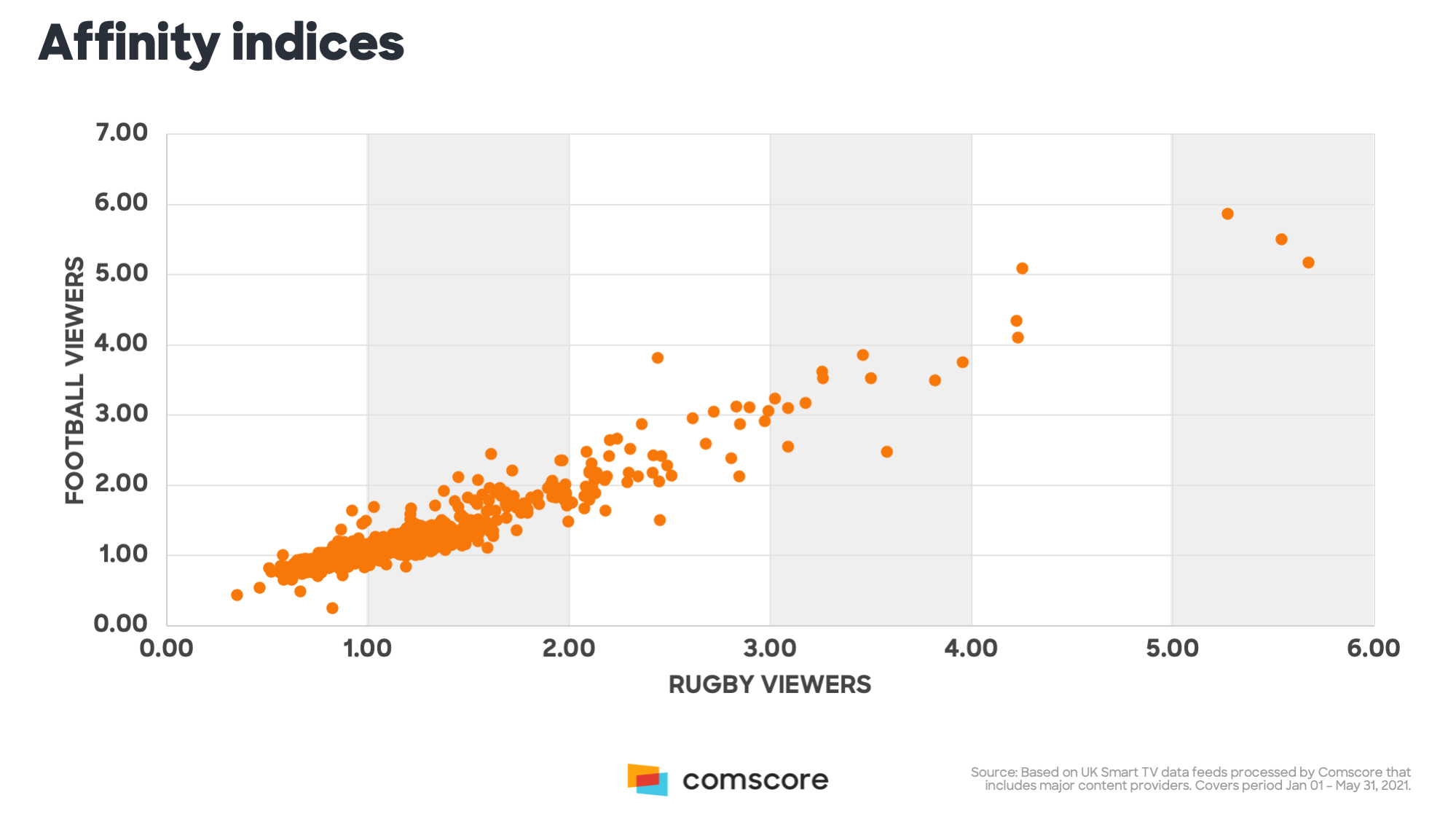 Rather than trying to find differences between sports fans’ affinity toward various OTT content, we can demonstrate the fractured nature of television audiences if we compare someone who has viewed Football to someone who has viewed one of the top shows on Amazon Prime, The Grand Tour, and to a viewer of one of the top shows on Netflix, Brooklyn 99.

Football viewers have the strongest affinity toward documentaries followed by horror shows, perhaps after seeing numerous injuries on the Football pitch viewers have become slightly descensetised to blood and gore. The lowest affinity is for animated content, which may reflect the fact that these viewers clearly like content that is grounded in reality (like documentaries or Football matches).

In contrast, viewers of The Grand Tour and Brooklyn 99 have the strongest affinities for more light-hearted programming – animated shows and comedy rank high for both sets of viewers, as does music for Brooklyn 99 viewers. Contrary to football viewers, these viewers care the least for horror shows, again suggesting that when they turn on their TV they primarily opt for some carefree entertainment. 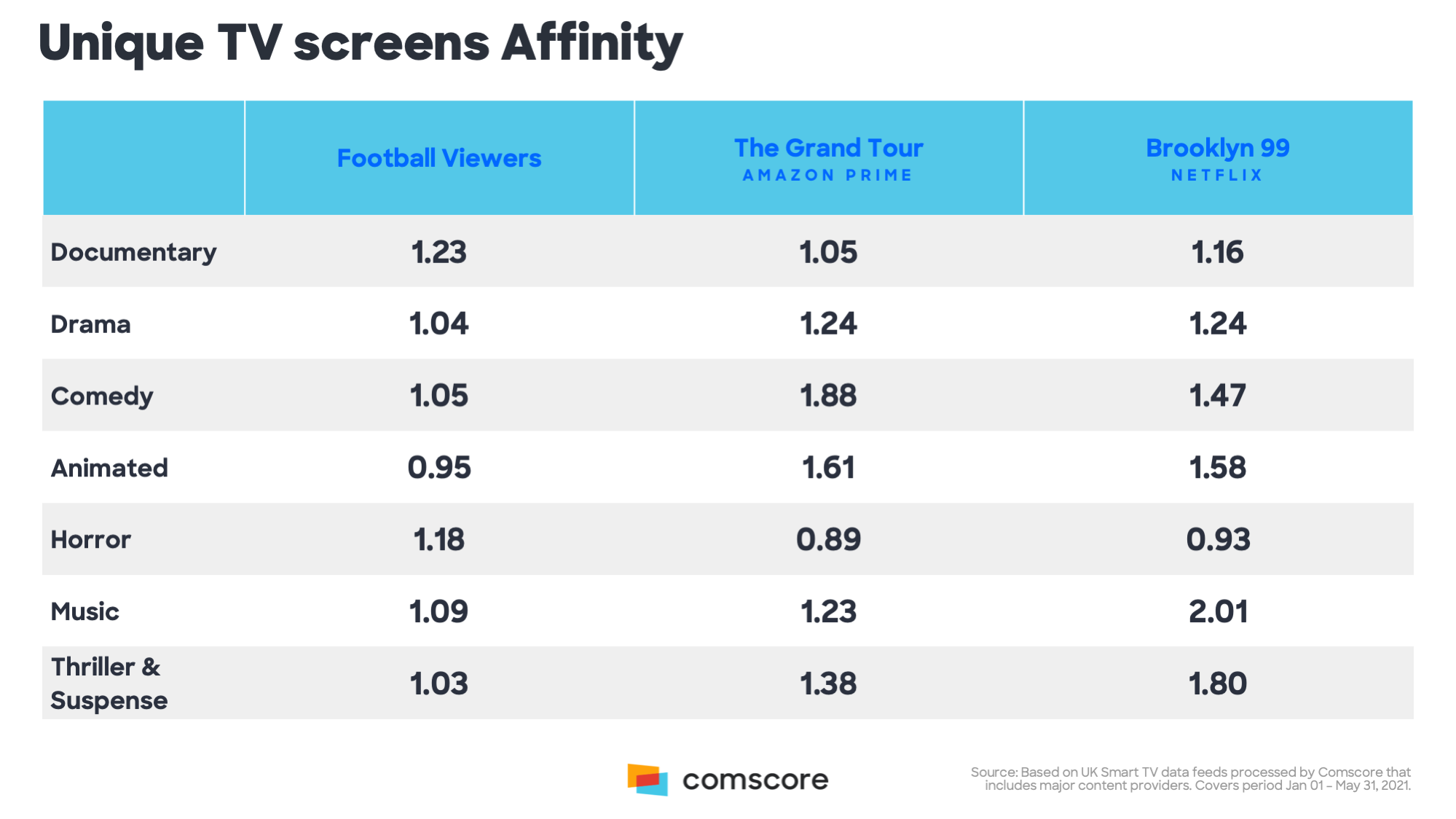