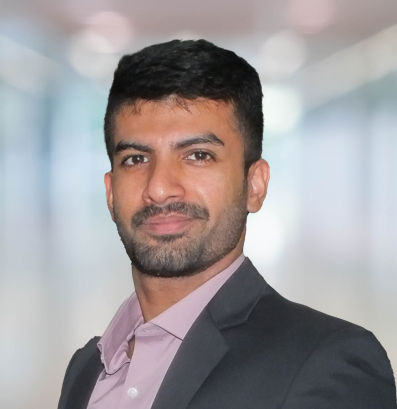 Another successful and exciting season of the IPL just wrapped up this past May, with the Gujarat Titans (a new team in the league) snatching the 2022 TATA IPL cup.

The final match of the TATA IPL 2022 was played on the 29th of May between the Gujarat Titans and the Rajasthan Royals. In true underdog fashion, the Gujarat Titans went on to win the tournament in their debut season, beating the Rajasthan Royals by 7 wickets. This blogpost will cover the second half of the season. If you haven’t already read the first post, you can find it here.

Hotstar saw a 12% growth in unique visitors (UVs) from February to March 2022, to reach a total of 141 million users (across Desktop and Mobile devices). This further grew by 2% in April to 144 million users. With the playoffs and the finals being played towards the end of May this year, the numbers were expected to peak in May. Despite most of the exciting matches (including the knockouts, semi-finals and finals) being played throughout the month of May, the reach of Hotstar saw a dip from over 143 million UVs in April to 133.6 million in May 2022. Interestingly, despite the drop in UVs during this period, true IPL fans continued to cheer on their favourite teams. The average minutes per user reflects this as it went up from 253 minutes to over 268 minutes during the same period. 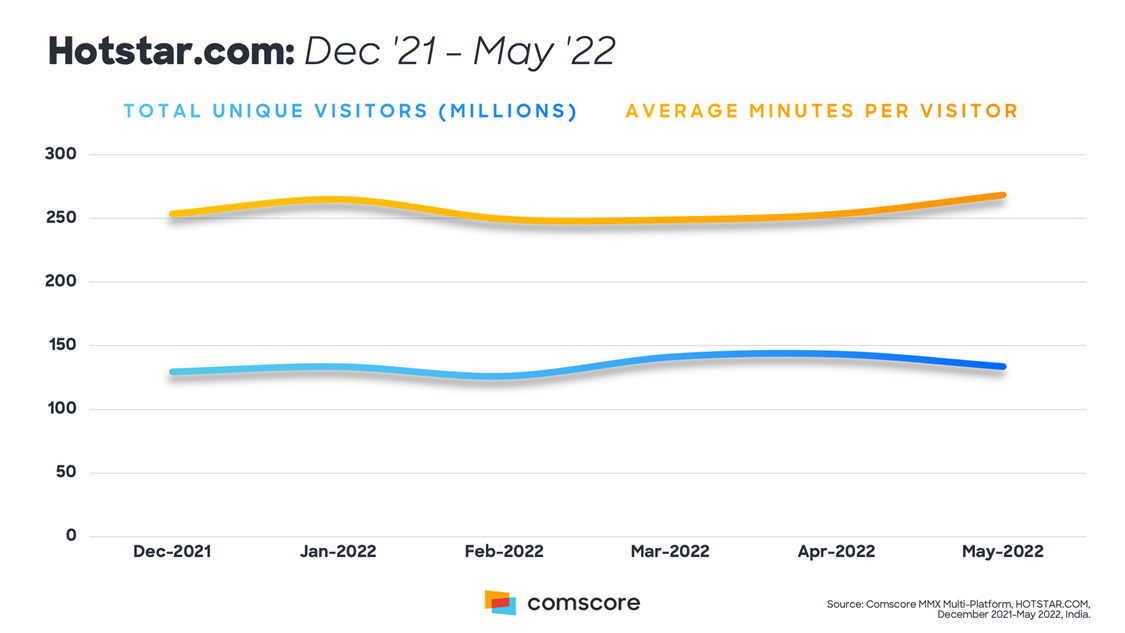 This trend was reflected in the traffic to sponsor websites as well. Apart from RuPay, which saw a growth in UVs from 563,000 to 962,000 from April to May 2022, all the other sponsor websites/properties saw a drop in UVs. In what some claim to be a relatively tough season for advertisers since the IPL began, 2022 has been the first year where Ad revenue per match did not see a YoY growth. In fact, there was a small dip from 58.2 crore rupees per match in 2021 to 53.1 crore rupees this year. 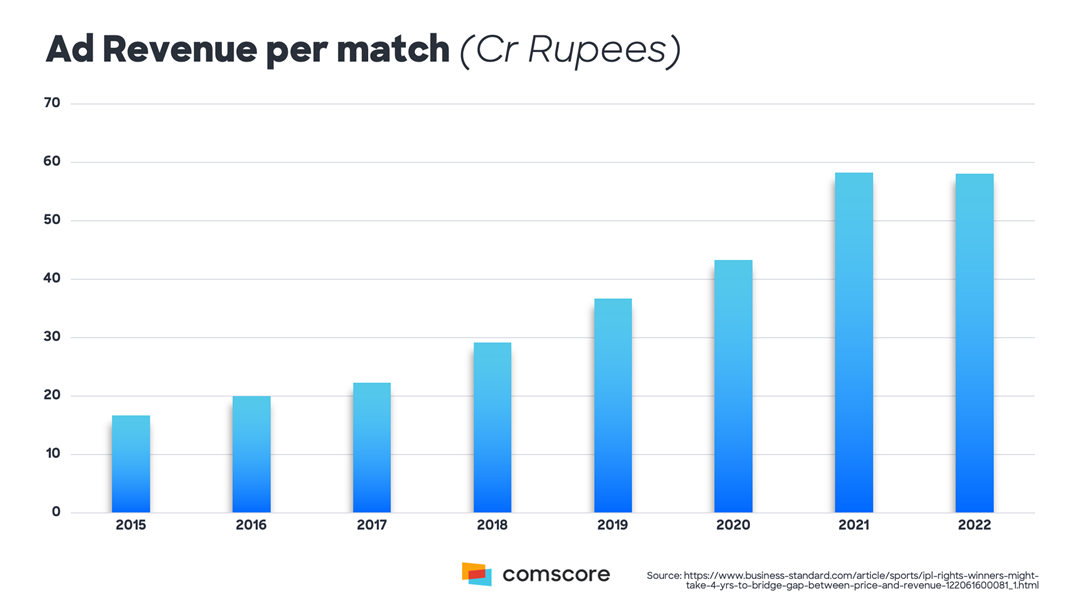 It’s unclear whether the 2022 numbers genuinely saw a drop or if it’s just dwarfed by the mammoth 2021 season numbers. If it was the latter, the fact that some of the biggest franchises (Chennai Super Kings and Mumbai Indians) in terms of fan following and market value did not feature in the qualifiers or in the finals could have had an impact.

Looking at the traffic to sponsor websites during the season, it was interesting to see that almost all the sponsors saw a drop in traffic to their sites this past May, the month where the tournament really got exciting. Upstox, Tata Motors and Unacademy were the ones who saw the highest dip in traffic to their websites/apps from April to May 2022. Shortly after the tournament, Unacademy also confirmed that they would not be associating with the IPL from the 2023 season. Unacademy has been associated with the IPL for the past 3 years, but has decided to shift focus, according to their Co-founder and CEO Gaurav Munjal. 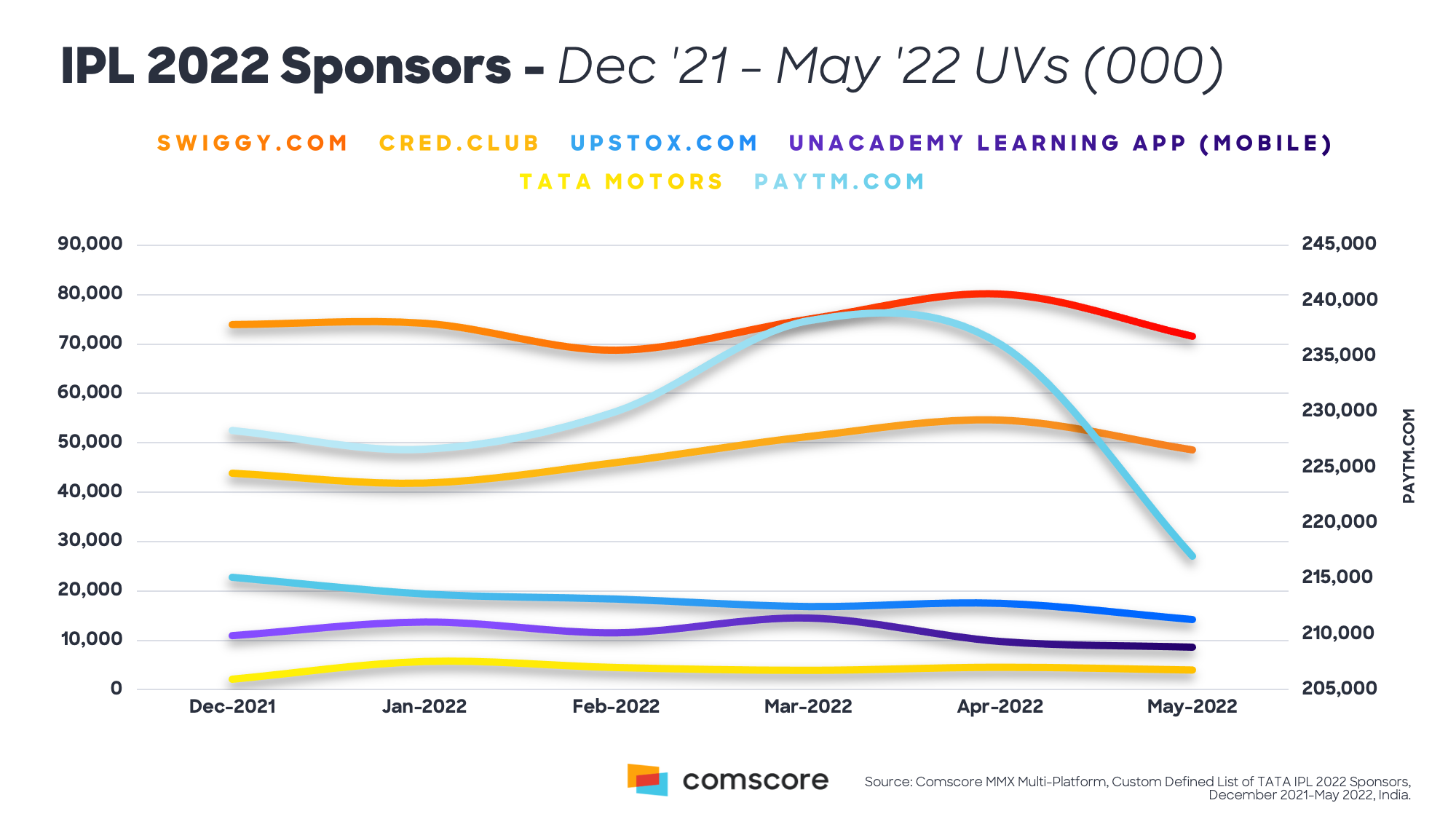 The table below, shows the list of the IPL sponsors for 2022 and how the traffic has grown/dropped to their digital properties (websites and apps) from April to May 2022. 6 out of the 7 sponsors were in the red, with only RuPay showing a positive trend in terms of UVs to their website/app. 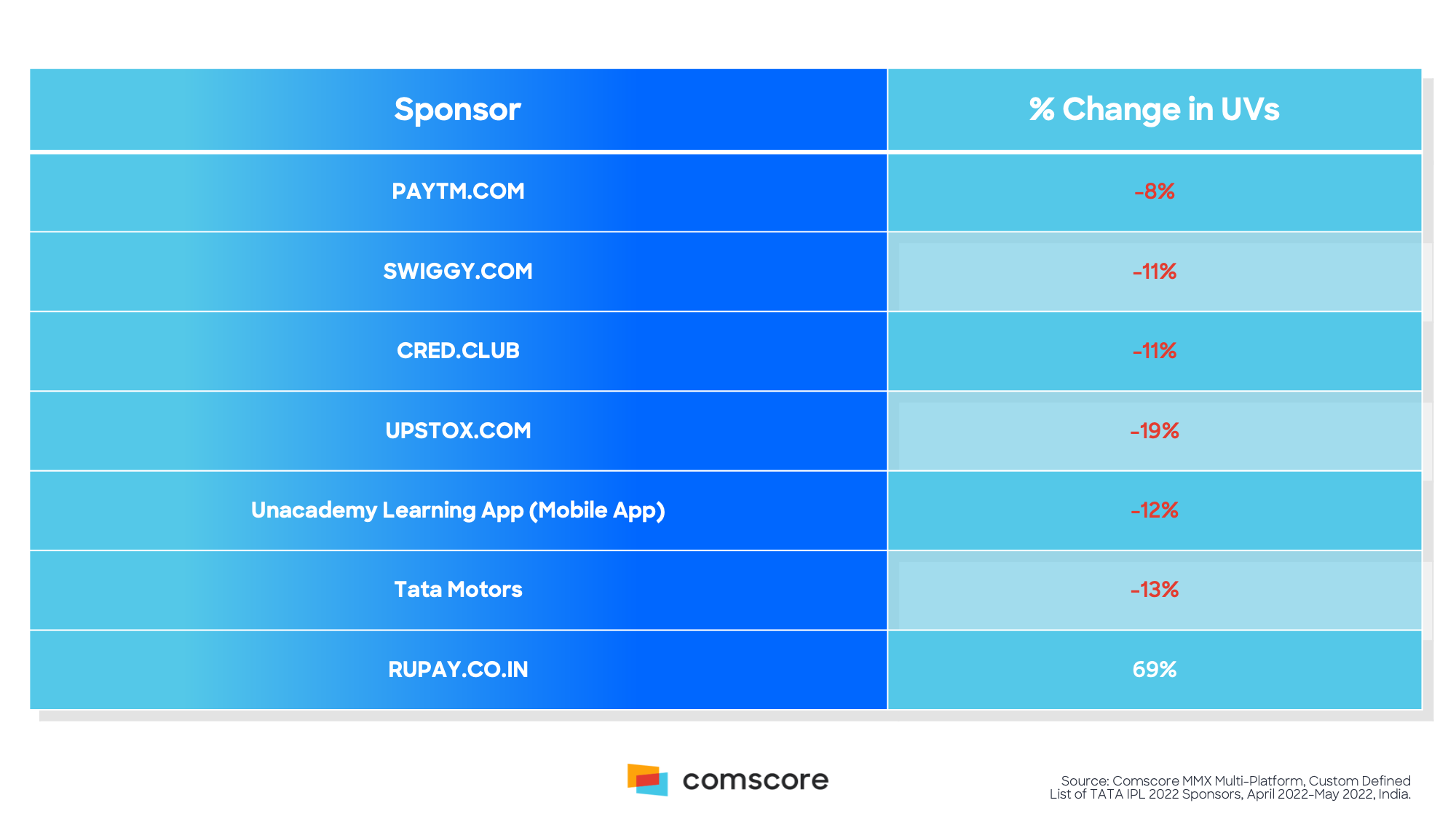 Another way to assess the performance of the 2022 season of the IPL was by tracking the growth of unique visitors to Hotstar during the start of the tournament. We looked at the growth of UVs to Hotstar for the month just before the start of the tournament in each of the past four years and compared it to the first month of the IPL season in that year to try and understand how the tournament attracts users to Hotstar. And we weren’t surprised to see that on average, Hotstar saw a growth of 25% in UVs and 33% in engagement (average minutes per visitor) during the onset of the IPL tournament from 2019 to 2022. The growth in Hotstar reach and engagement was the least in 2022, compared to the previous 3 seasons, including the restart of the remainder of the league’s 2021 season in September 2021. 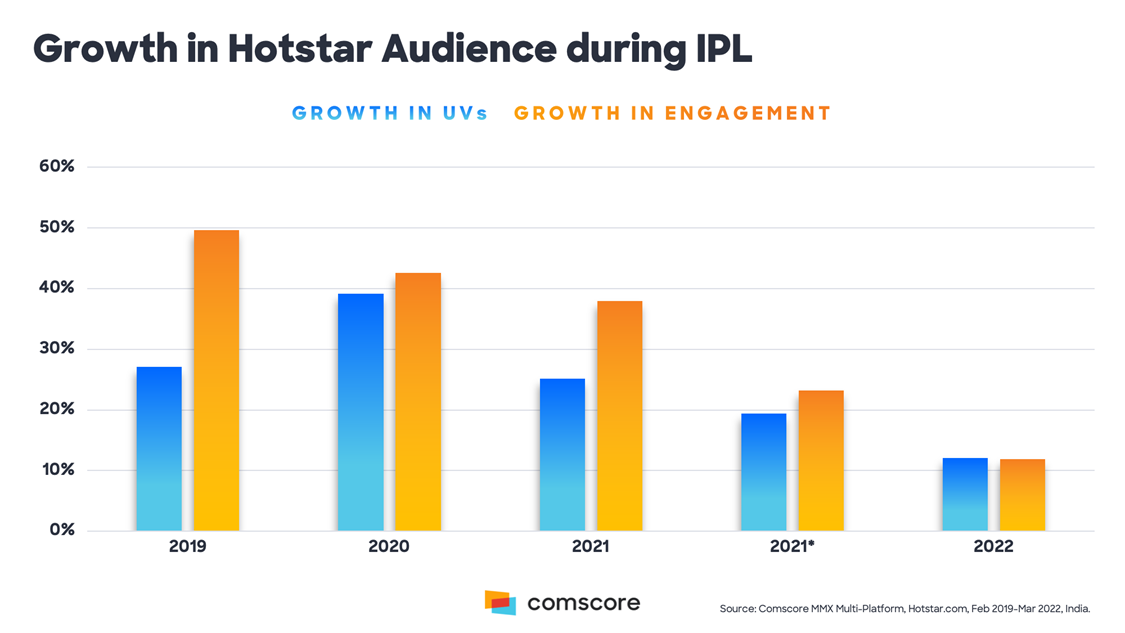 *The second set of values for 2021 shows the growth in UVs and average minutes per visitor from Aug to Sep 2021, when the league restarted after the pandemic led to the tournament being paused in April 2021.

Despite the Hotstar UVs dropping in May 2022 across India, there were a few state clusters that exhibited a different trend. No surprise that Gujarat and Rajasthan were 2 of the states that posted growth figures for May 2022. It seems like Hotstar visitors from Gujarat and Rajasthan were definitely behind their teams as they went on to battle it out in the Finals of the tournament on the 29th of May. Gujarat posted a growth of 2% in UVs from April to May 2022 while Rajasthan showed a 9% growth. Maharashtra & Goa was the only other state cluster that posted a positive growth figure of 8% in May 2022, while all the remaining state clusters showed a drop. 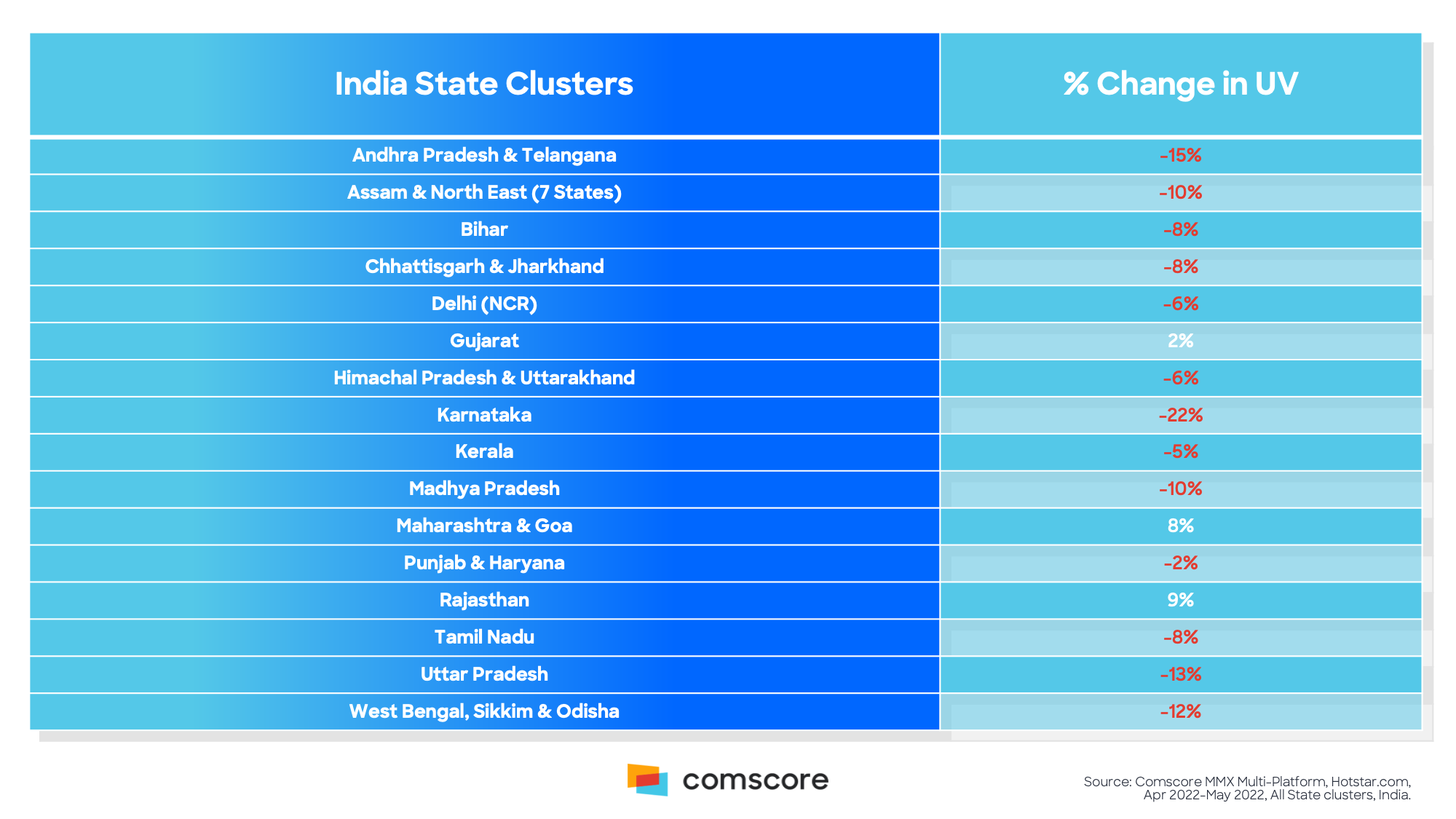