The Internet is a Gamechanger in the 2008 Presidential Race

The Internet is a Gamechanger in the 2008 Presidential Race

Like many of you, I’ve been following the 2008 presidential primary season with great interest. And while the first non-incumbent election in decades has made the early races even more intriguing than usual, it’s especially exciting for me to see the very important role the Internet has played in shaping the course of the primaries.

Back in 2004, former Vermont Governor Howard Dean’s campaign really woke everyone up to the power of the Internet in politics. The Washington establishment had become accustomed to the way elections had been won over the course of the past several decades –TV ads, newspaper media coverage, direct mail, and good old fashioned machine politics. But Dean, the firebrand Washington outsider who was never supposed to stand a shot at the nomination, managed to stir up a strong grassroots movement using the Internet and raised enormous sums of money online, propelling him to his unlikely status as the Democratic frontrunner. Though Dean’s campaign ultimately fizzled, it left an indelible imprint on American politics. The Internet was quickly changing the political landscape and candidates realized that they ignored it at their own peril.

Fast forward to the 2008 primaries. Every political candidate learned the lessons of Howard Dean and now has a well-organized Internet strategy, including high-powered, multimedia websites, personal profiles on MySpace and Facebook, and their own YouTube channels, as a starting point. But it’s not just about having a presence online -- the real significance of the Internet lies in its ability to cultivate a movement.

I’ve heard a few people call it “the Facebook election” in reference to the way this election -- and Barack Obama’s candidacy, in particular -- has excited young voters in a way that hasn’t been seen since the 1960s. The primaries have seen younger voters turn out in record numbers and take an active role in contributing their time, energy, and even money. The Internet is lowering barriers to entry and making it easier for many people to get involved and stay informed. It is also making it much easier for average folks to open their wallets and contribute with a few clicks of the mouse.

Money has played a more significant role than ever before, as candidates continue to set records for fundraising. In the past, raising money meant sending out mailers and making thousands of phone calls, which required a considerable investment in resources which typically yielded a slow trickle of contributions. Not anymore. Now the candidates can blast an email to the millions of people on their email list for a fundraising drive, and get them to contribute online in a matter of seconds. In the hours and days after Super Tuesday, both the Obama campaign and Clinton campaign parlayed their respective victories into massive online donor drives. Obama raised more than $7 million in just one day after Super Tuesday, while Clinton reportedly raised $10 million within just a few days. To date, both campaigns have raised well in excess of $100 million since the beginning of 2007.

Though the fundraising on behalf of both campaigns has been unprecedented, Obama has had a distinct advantage in online fundraising. This was apparent in the Comscore data, which showed Obama with a 3:2 advantage versus Clinton in the number of visitors to his donation page in January (256,000 vs. 171,000). Interestingly though, if we assume that each visitor to the donation page was indeed a donor, Hillary’s website had a higher conversion rate (15% vs. 12%). 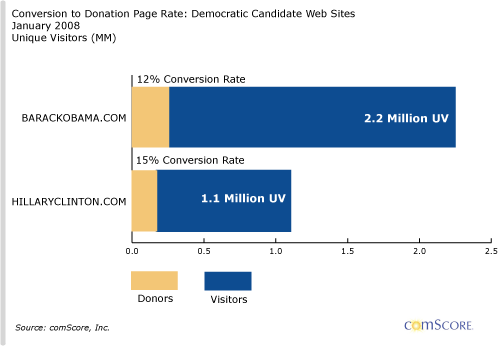 Looking at the traffic trends to the two candidates’ websites, there are a few interesting things to note. For most of 2007, visitation to their websites ran pretty much neck-and-neck even though Hillary was generally running much higher in the national polls and was considered by many the presumptive Democratic nominee. But as Obama’s campaign has seen a momentum surge in January and into February, we’ve actually seen visitation to his website display separation from Hillary’s, nearly doubling the number of visitors in January (2.2 million vs. 1.1 million). 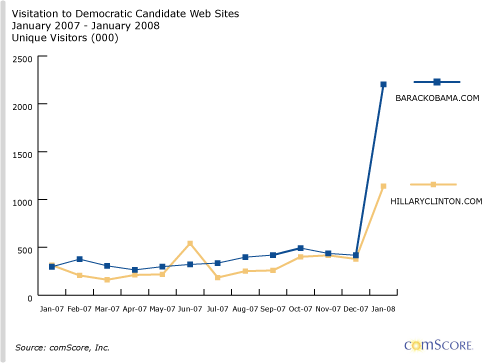 The relative surge in activity at Obama’s site may be a function of a couple factors. In part, it reflects the overwhelming enthusiasm among his base of supporters. However, it probably also reflects the fact that he’s a newcomer to the national political scene, and many primary voters are seeking to find out more information on him. These lurkers are almost certainly less likely to contribute money right away.

With money of increasing importance at the latter stages of a campaign – especially to compete in the remaining big states like Texas, Ohio and Pennsylvania -- it will be interesting to see if Obama’s campaign can succeed in converting a large number of the newer visitors to his website into a significant fundraising advantage in February. If he’s able to out-raise Hillary by a wide margin, it just may be enough to put him over the top and pull off what once seemed like a highly unlikely upset. And while the pundits will pontificate about race and gender and low-income voter segments, it will be hard to ignore that the Internet will have played a substantial role in determining the outcome of this race.

But no matter who wins in the end, it’s clear we are witnessing a new paradigm quickly take shape. The Internet just may be giving television a run for its money as the most powerful medium in American politics.

Safely Navigating Election Advertising in 2022: A Q&A with L2...