Last week, Comscore announced the launch of our video measurement service in six markets in the Asia-Pacific region - Australia, China, Hong Kong, Japan, Malaysia and Singapore - expanding our measurement capabilities in these dynamic global Internet markets. With nearly half the world’s Internet population residing in Asia, the region offers a wealth of opportunity for both global and local Internet brands seeking to engage these important audiences.

Across the globe, online video consumption is soaring. In the 11 individual countries that Comscore Video Metrix measures, at least 80 percent of Web users in each of these markets viewed online video in January, making it one of the most popular activities on the Internet. France (90.4 percent), Canada (89.9 percent) and Singapore (87.6 percent) reported the strongest online video penetration fueled by nearly ubiquitously fast broadband speeds. Japan had the highest online video engagement among the Asian markets at more than 12 hours of video consumption per viewer, with Singapore (10.8 hours per viewer) and Hong Kong (10.2 hours) not far behind. Germany (18.8 hours per viewer) and Canada (17.4 hours) boasted the highest video engagement across all reportable markets. 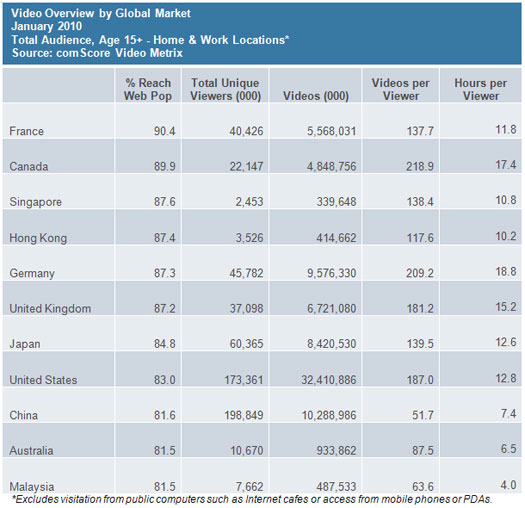 There’s no doubt that video will continue to play a strong role in the online consumer experience. In an arena that was once dominated by user generated content, online video is maturing considerably as a medium with more professionally produced content – including broadcast TV content – capturing consumers’ attention, and shifting the dynamics of “where, when and how” people consume video content. The medium also offers advertisers and marketers a uniquely engaging digital platform that can reach audiences in a more targeted and cost efficient way than traditional TV advertising, while driving meaningful lifts in consumer behavior.

We look forward to keeping an eye on how the online video market develops in Asia in the coming years and what it will mean for media companies in the region. Stay tuned for more updates from Comscore on exciting developments in Asia in the coming months. It’s shaping up to be a busy and exciting year for Comscore from Tokyo to Sydney and everything in between.