Tablets are poised to fundamentally disrupt the way people engage with the digital world both on-the-go and perhaps most notably, in the home. New insights from Comscore TabLens found that more than half of U.S. tablet users watched video and/or TV content on their device in April 2012, compared to just 20 percent of the smartphone audience.

Not only were tablet users more likely to watch video, but they were more likely to view video habitually with 18.9 percent of tablet users watching video content at least once a week, and 9.5 percent watching video nearly every day on their device. Of those viewing video at least once during the month, 26.7 percent paid to watch content, highlighting the monetization potential this platform represents for content providers.

To view the full report, please visit: Majority of Tablet Users Watch Video on their Device 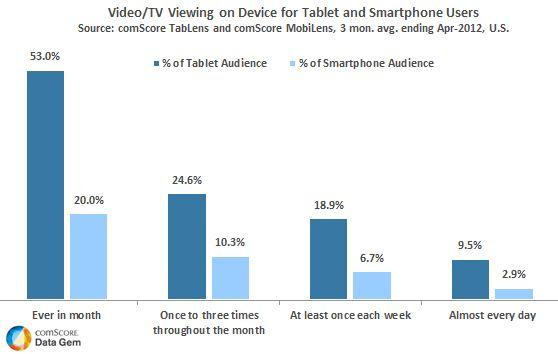