With 2011 behind us, I thought you might be interested in some observations regarding what the holiday shopping season told us about the state of the consumer economy.

Comscore reported that e-commerce had a strong season, with sales for the period from Nov 1 through Dec 25 increasing by 15 percent over the corresponding days the year earlier. The National Retail Federation reported that it expects total sales to be up about 3.8 percent versus year ago, which falls short of the 5.2 percent growth recorded during the 2010 shopping season, but is still a respectable growth rate. Nonetheless, with a growth rate about 4x faster than total spending, it’s clear that consumers continue to be attracted to the convenience and lower prices offered by the Internet.

So, how should we interpret these data? Are we seeing an improvement in the U.S. consumer economy? The answers seem to be mixed.

One reason we’re seeing increased consumer spending may be because the personal savings rate — the percentage of after-tax income that is not spent — fell to 3.5% in November from 3.6% in October. As recently as June, households were saving about 5% of their earnings. And, until July, the savings rate had consistently been at 4.5% or higher since late 2009. The latest savings rate is still better than the housing bubble months of 2005-07, when it generally hovered between 1% and 2%. Even so, the recent drop in saving indicates that although consumers want to buy things they put off during the shaky recovery, they don't have the income growth to support a more robust ramp-up in purchase activity.

Another reason for increased spending is likely because debt has been increasing. The government recently reported that household borrowing on credit cards, car loans, student loans and other kinds of installment debt rose at a 9.9% seasonally adjusted annual rate in November, the fastest monthly increase since November 2001.

On the jobs front, we’re seeing slow improvement. The government reported last week that December’s unemployment rate fell to 8.5% from 8.7% in November. That’s the lowest level in three years, suggesting that the U.S. recovery is gaining traction despite high oil prices and European turmoil. The economy added 200,000 jobs in December, double November's pace, with all of it coming from the private sector. This good news, however, was tempered by the fact that the labor market still faces big challenges. More than 13 million workers are jobless and another 10 million are underemployed, and it will take years—even if job creation accelerates sharply—to whittle down that number. Most economists agree that about 125,000 jobs need to be created each month just to keep pace with the growth in the population.

Finally, it’s clear that the consumer economy continues to be under stress. Going in to the holiday shopping period, Comscore surveyed consumers regarding their view of economic conditions and found that 60 percent considered them to be poor, approximately the same level we observed six months earlier.

Consumer spending this holiday season was boosted by retailers, who were very active with promotions and discounts, both online and offline. In addition, online retailers offered free shipping to a degree we haven’t previously seen: 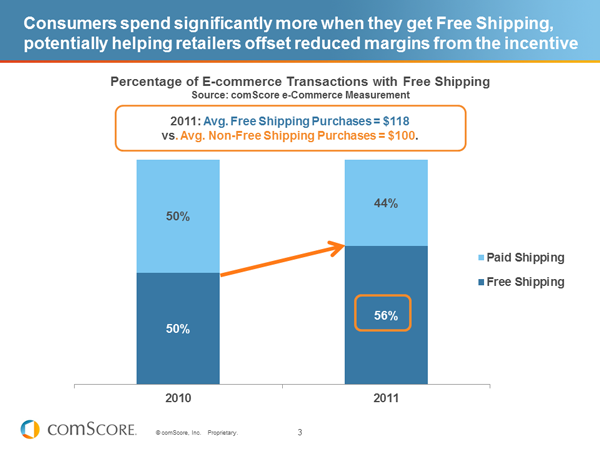 Each year, it seems that retailers’ promotions occur earlier in the season. This year was no different, with attractive deals appearing well ahead of Thanksgiving. Shop.org estimated that more than 90 percent of online merchants offered promotions over the Thanksgiving weekend, with 8 out of 10 offering promotions on Cyber Monday also. As a result, we saw Cyber Monday rank as the heaviest shopping day of the season for the second consecutive year, with total sales of $1.25 billion. At the same time, as consumers’ confidence in shipping has increased we’ve seen heavy online buying also occur later in the season. This year, for example, 2,600 merchants participated in Free Shipping Day (Friday December 16), offering free shipping with guaranteed delivery by Christmas Eve. Consumers responded enthusiastically, spending $1.072 billion and making it the sixth heaviest buying day of the season – which is particularly notable since Fridays tend to be one of the lighter online spending days of the week.

Consumer response to retailers’ deals on Cyber Monday was so strong that a significant shift occurred in the time of day that purchases were made online: 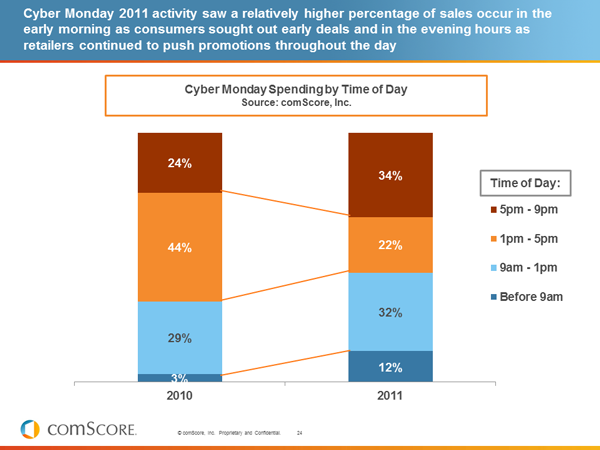 As a result of retailers’ heavy communication of deals ahead of Cyber Monday, coupled with consumers’ ability to easily locate them using both fixed and mobile Internet connections, we saw a significant increase in early morning buying as consumers chased deals to make sure they got them before they were sold out. And with retailers continuing to push promotions throughout the day, we also saw heavy buying continue later into the evening than in previous years.

So, the picture on the consumer economy is blurry. Spending is up but so is debt. At the same time, the savings rate is dropping. And while unemployment is slowly declining, the rate of new job additions is still slower than we would like to see at this stage of the recovery. We also can’t ignore one other key question that will remain unanswered until retailers report their financial results for the holiday season: to what degree have discounting and free shipping depressed gross margins? Because, while growth in consumer spending is on balance a good thing, if it does not yield higher profits for businesses then it’s unlikely to promote continued growth in jobs.