Earlier this morning, Comscore chairman Gian Fulgoni announced our Cyber Monday 2010 spending total with the news that people spent to the tune of $1.028 billion dollars on U.S. websites, making it the heaviest online spending day on record and the first to eclipse the one billion dollar threshold.

This spending bonanza marked a 16-percent increase vs. Cyber Monday 2009, and more than double the spending we observed just five years ago. It’s pretty amazing to see how far this day has grown over the years. 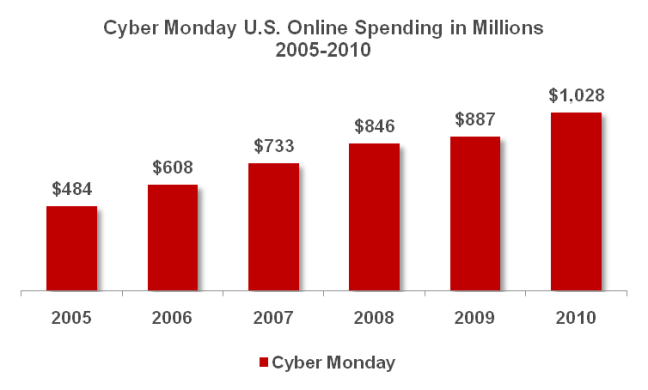 Importantly, Cyber Monday is not – nor has it ever been – the heaviest online spending day of the season. That notion is a misconception that seems to have been perpetuated over the years. Cyber Monday is actually the first significant increase in online spending we see each season, far heavier than Black Friday, but it is then followed by several days of continued heavy spending into the middle of December.

So what will be the heaviest online spending day of the season this year? Most likely it will occur either Monday, December 13 (sometimes known as “Green Monday”) or Tuesday, December 14. Last year’s heaviest spending day occurred on Tuesday, December 15 when we reached $913 million, the first time we had surpassed $900 million in spending. This year, it seems likely we’ll reach the billion-dollar spending threshold at least a couple of more times.

This online holiday shopping season is clearly off to a great start – let’s hope this momentum continues.