The trees may not be trimmed nor the menorahs lit (yet!), but the 2013 online holiday shopping season is already well underway. While we’re predicting a combined 14-17% growth in holiday desktop e-commerce and mobile commerce vs. last year, we’re tempering our expectations a bit thanks to discretionary spending being squeezed and six fewer shopping days this season. But rest assured, the overall spending outlook is still strong, we expect benchmark promotional shopping days like Black Friday, Cyber Monday and Green Monday to perform particularly well.

Over the past several years, each holiday season has seen the continuation of many online shopping trends that are not necessarily new but nevertheless shape the dynamics of the season. The holiday shopping period continues to kick off earlier and earlier (with an increasing number of retailers offering deals on and even before Thanksgiving Day) and Cyber Monday rises in prominence and promotional activity.

But while some trends are simply evolutionary to the online holiday shopping season, there are other trends we expect to be revolutionary. Though some of these more revolutionary trends may have existed during last year's season, market conditions have changed, which means that the way in which these trends impact the season are, of course, different than they were in 2012. The four key trends we've identified for this year – which we discussed during our recent State of the U.S. Online Retail Economy webinar – can be referred to as "the 4 S's:" Smartphones, Sit-Back Shopping, Social Commerce and Showrooming.

Here's how we anticipate the market dynamics impacting these trends this season:

As of September 2013, we've reached a point in the U.S. where more than 50 percent of Internet users are accessing the web using more than one device. Therefore, it comes as no surprise that the digital population now spends more time engaging with retail brands on their smartphone than on their desktop. A third of the average leading retailer's monthly traffic now comes exclusively from mobile devices, such as smartphones and tablets. While an app may not yet be a "must have" for every retailer, a mobile strategy is essential for growing retailers' market shares and reaching new audiences who might be more inclined to shop via a mobile device. 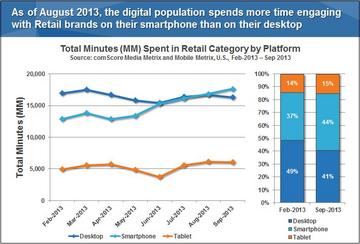 Mobile commerce is significantly outpacing e-commerce and bricks-and-mortar spending, although it sees significant variation across product categories. Toys and video games, for example, are strong categories when it comes to mobile purchasing. As smartphones continually become more accessible to consumers, expect to see mobile commerce spending -- as well as the list of mobile-skewing categories – increase. 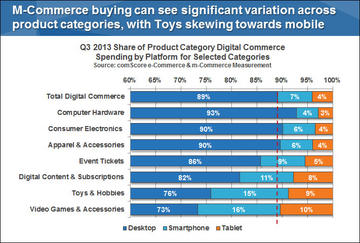 Social commerce isn't new, but certain social networks – particularly Pinterest – will certainly influence the online holiday shopping season. According to a recent study from Piquora, a Pinterest marketing firm, the "sales-per-pin" figure has risen 25 percent since December 2012, meaning that pins are increasingly driving sales. And this probably isn't surprising, but Pinterest is also increasingly going mobile: for the first time ever in September 2013, the number of smartphone visitors to Pinterest surpassed the number of desktop visitors. 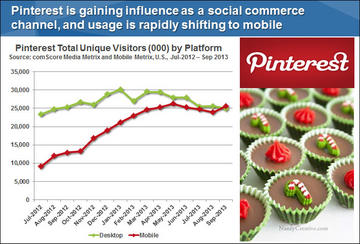 Beyond Pinterest, other social networks also play a role in holiday shopping. According to Crowdtap, two out of three shoppers purchased a gift they found via social media, and 39 percent of shoppers said that Facebook specifically has influenced them to purchase a gift.

It's possible that many don't know what the term 'showrooming' means, but they certainly have learned – and engaged in – this behavior. Defined as seeing an item in store and then purchasing that item online, 76 percent of consumers indicate that they showroom "sometimes." But what's even more interesting is that smartphone owners who showroom also tend to be the early birds when it comes to making a list and checking it twice: 44 percent of these consumers have already started their holiday shopping.

With more channels for holiday browsing and shopping being introduced, combined with the fact that retailers are more competitive than ever when it comes to offering consumers the best deals, look for showrooming to increase this holiday season and beyond.

The (Mostly Merry) Road Ahead for Retailers

As we inch closer to the most intense period of the holiday shopping season, we're optimistic about continued double-digit growth in both desktop e-commerce and m-commerce spending, tempered with the understanding that a truncated shopping calendar will present a handful of challenges to retailers this year.

But this will still be a mostly merry season for retailers. Those who start developing or honing their strategies now to take advantage of the 4 S's will be positioned for success, not only during the 2013 holiday season but into 2014 and beyond.