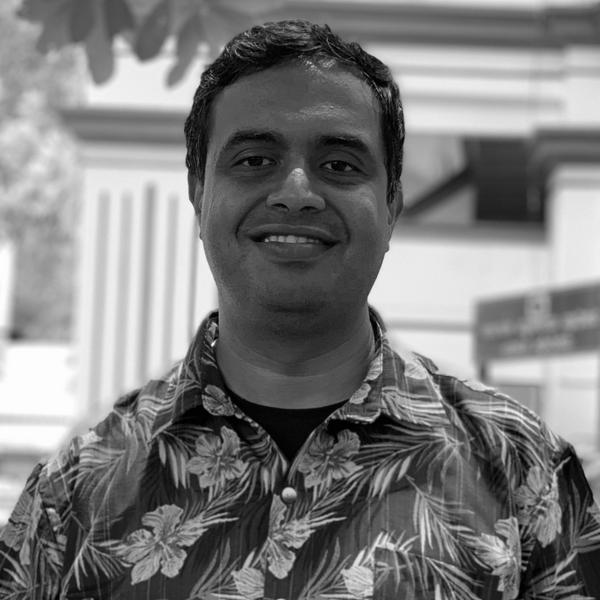 To state the obvious, 2020 has been like no other year. With most Americans confined to their homes because of the coronavirus pandemic creating a “captive” audience, the demand for streaming content from home skyrocketed, leading to abrupt changes in viewership trends and audience profile, not to mention wider industry implications. In the worst of times, it was the best of times—for streaming.

To capitalize on this abundance of at-home audiences, many streaming services have made strong pushes to acquire subscribers in the last year – from Disney's Disney+, AT&T's HBO Max, Comcast NBC Universal's Peacock and more in-the-works. From major advertising spending for building awareness to creative pricing bundles, these services are attempting to differentiate themselves in their content and value to consumers. Comscore Ad Metrix Media Spend reporting indicates that Netflix, Disney+, Hulu, YouTube, and Amazon, accounted for $500MM in advertising spend in 2020 to promote their streaming platforms 1. 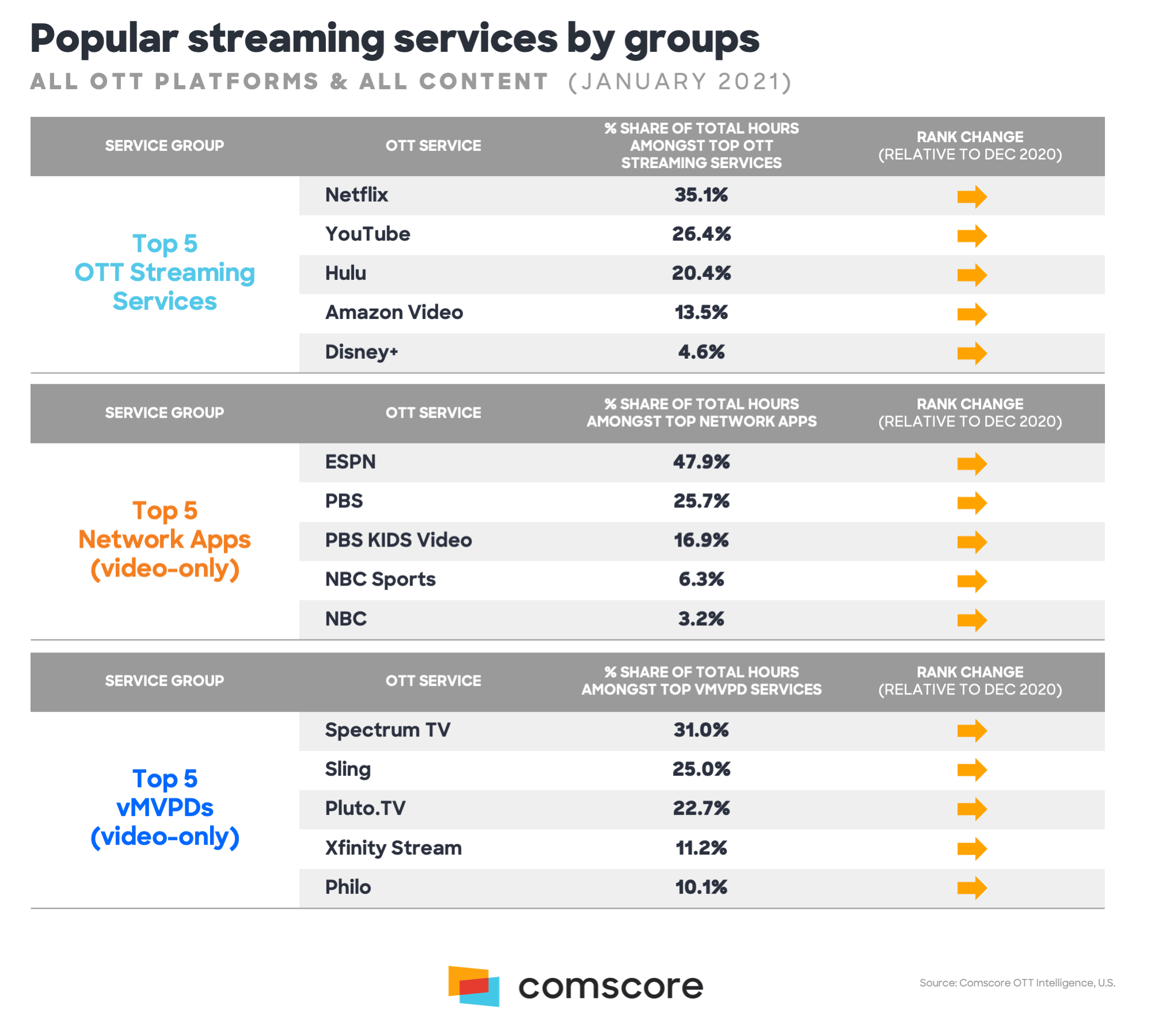 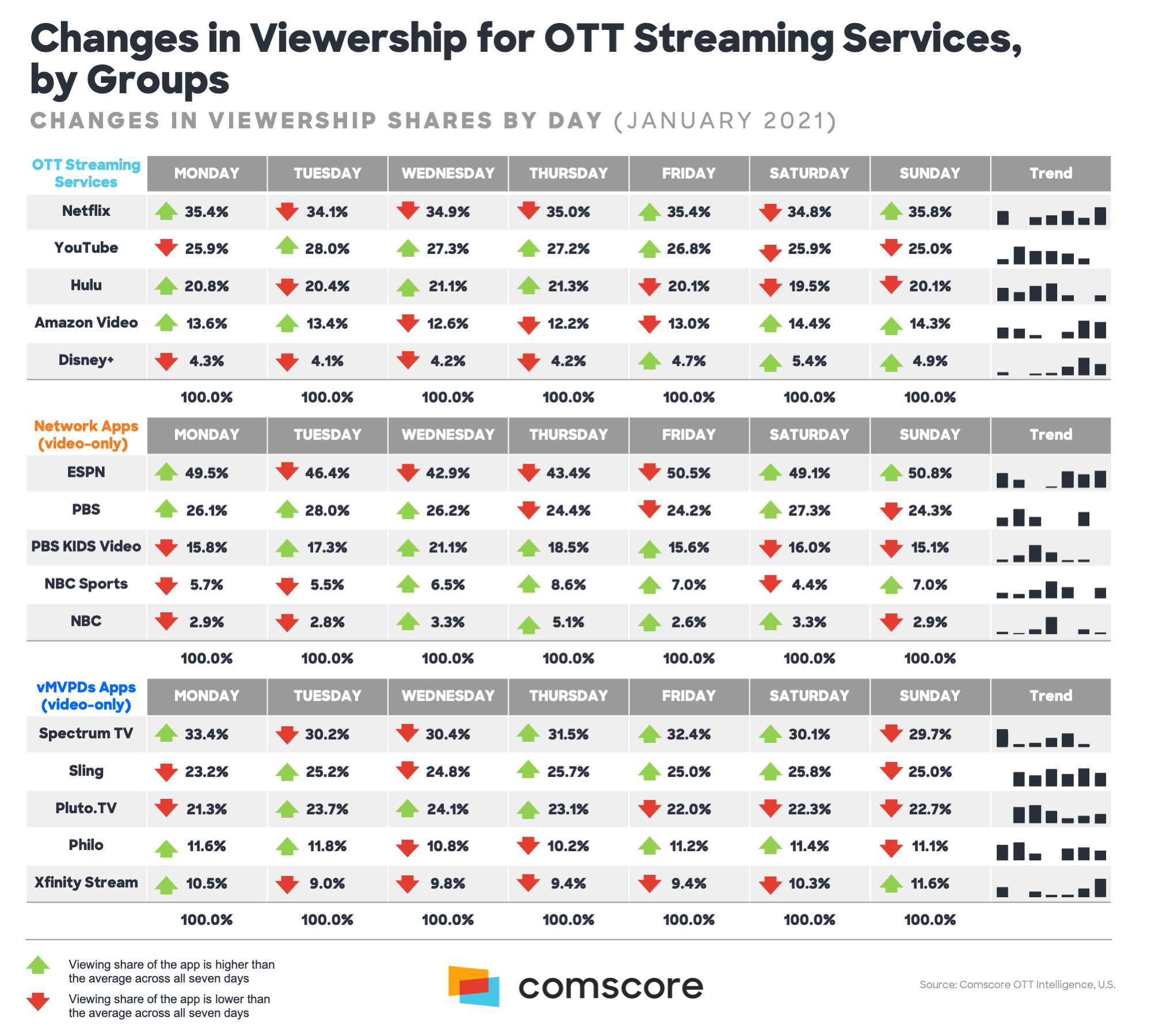 Among OTT Streaming services, our first observation is on Netflix’s viewing share throughout the week. Netflix’s viewing share in January 2021 on Monday among Top Five OTT Streaming services was 35.8%, higher than its average share across all seven days. There is a decline in its share during mid-week (Tuesday-Thursday) followed by an increase over the weekend. YouTube, on the other hand, appears to be performing well during the mid-week. Amazon Video is a strong weekend performer. During the weekend when consumers have more free time, Amazon Video and Disney+ are the only two streaming services with a share of viewership on both Saturday and Sunday that is higher than their respective average share across all seven days.

Among Network OTT apps, ESPN has higher than its average viewership share on Sunday and Monday, with muted viewing during weekdays. PBS, on the other hand, exhibits the opposite trend – strong performance during the weekdays from Monday to Wednesday. PBS Kids Video and NBC Sports are performing well on weekdays (Tuesday-Thursday & Wednesday-Friday respectively). However, NBC lack a discernible weekday/weekend trend.

Lastly, among vMVPD OTT apps, Xfinity Stream has higher viewership share on weekend (Saturday-Sunday) and Monday. Sling’s viewing share is highest on Saturday. In general, the variance in viewing share across all these apps could be driven by a multitude of intrinsic (Panel sample size variations) or extrinsic (cannibalizing effect of competitor’s release of new content such as movie premiers) factors. Investigation of these factors are outside the scope of this article. 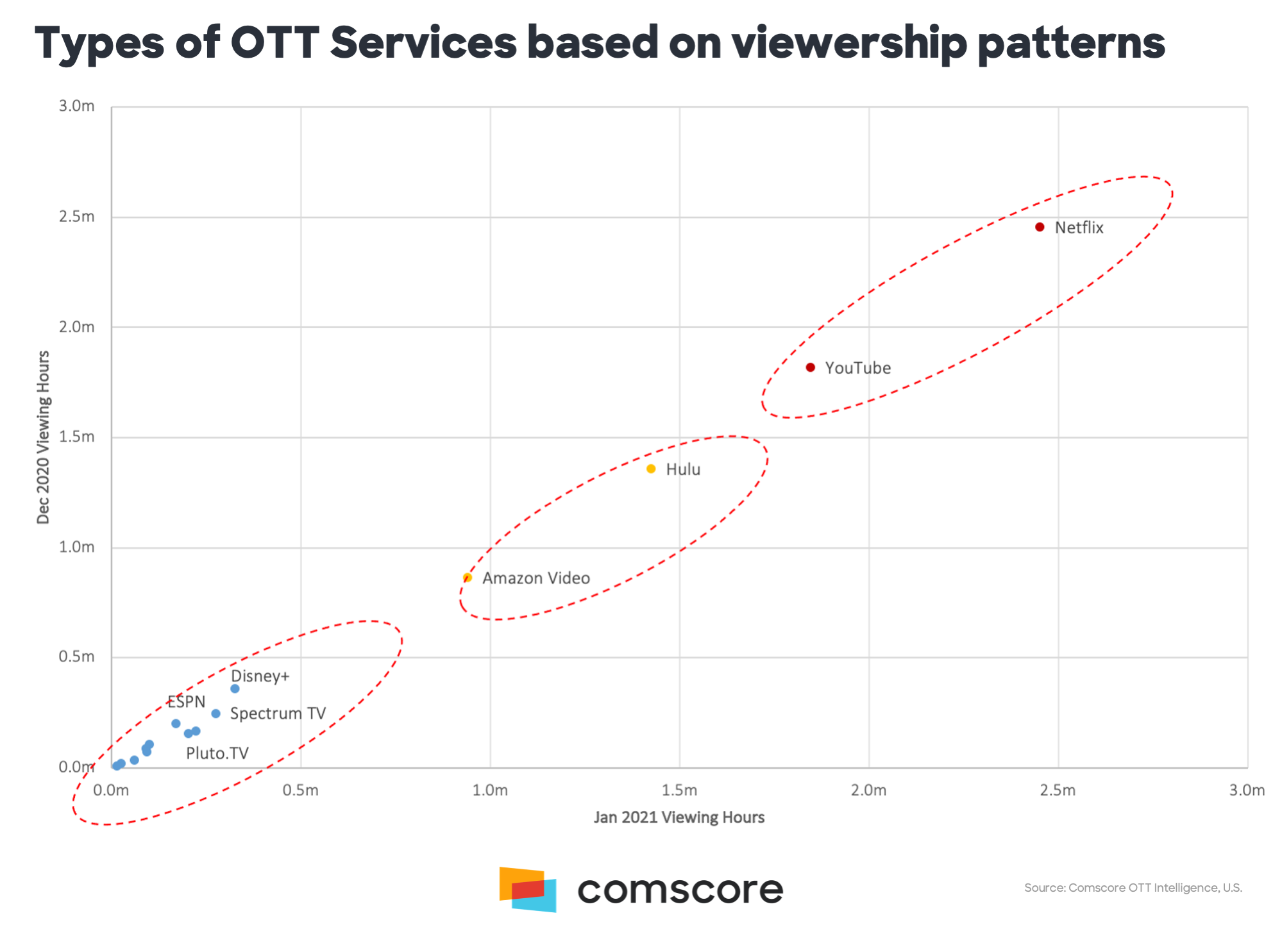 Gain a Deeper Understanding of Your Audiences with Personas

How Quizlet Leverages Comscore Digital Measurement to Tell a Complete...